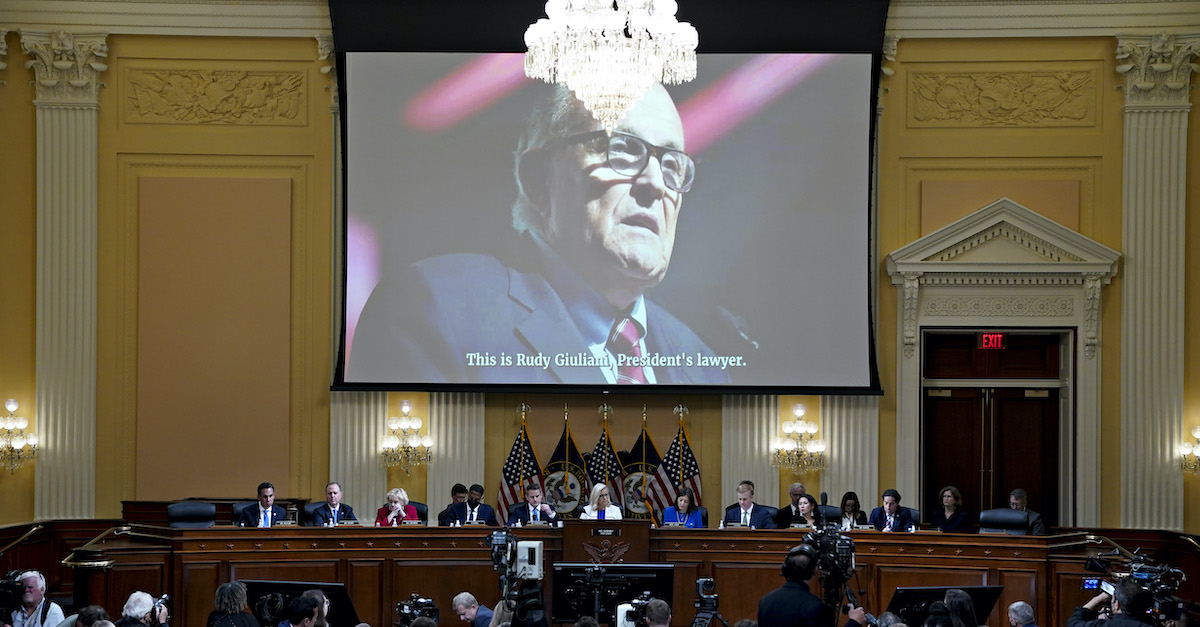 Rudy Giuliani, former lawyer to Donald Trump, displayed on a screen during a hearing of the Select Committee to Investigate the Jan. 6th Attack on the US Capitol in Washington, D.C. on Thursday, July 21, 2022.

Georgia prosecutors have kept tight-lipped about whether former President Donald Trump’s attorney Rudy Giuliani is a “target” of their investigation into 2020 election subversion, the former mayor’s lawyer announced in court on Tuesday.

Fulton Superior Court Judge Robert McBurney, who is supervising the investigation, said he is imploring the office of  Fulton County District Attorney Fani T. Willis (D) to answer that question before Giuliani testifies before a special grand jury. The judge isn’t ordering that disclosure, however.

“Don’t leave them hanging on that front,” McBurney added.

Nor did special prosecutor Nathan Wade announce it in court on Tuesday.

Before that exchange, discussions of Giuliani’s health issues dominated a hearing over the former mayor’s subpoena to testify before a special grand jury.

“I’m sure he can find a way, short of Greyhound, that can get him to Atlanta,” McBurney noted.

Special prosecutor Nathan Wade appeared to express skepticism of Giuliani’s condition, saying that the former mayor’s doctor is an infectious disease specialist. They understood his condition to be a heart issue.

Thomas countered that the DA’s office did not contact Giuliani’s doctor with their questions about his condition.

In a brief filed earlier on Tuesday, Thomas disputed the state’s assertion that Giuliani “purchased multiple airline tickets with cash, including tickets to Rome, Italy, and Zurich, Switzerland for travel dates ranging between July 22, 2022 and July 29, 2022.”

The lawyer appeared to chalk it up to a misunderstanding.

Expressing sensitivity surrounding the medical issues, Judge McBurney proposed moving Giuliani’s appearance in Atlanta to Aug. 17. He said that Giuliani could break up his travel with a stop in Washington, D.C.

Since a judge authorized her earlier this year to convene a special grand jury, Willis has kept Trump’s associates busy. Her office has subpoenaed Giuliani and a slew of Trump’s other lawyers and political allies, including Kenneth Chesebro, John Eastman, Cleta Mitchell, Jenna Ellis and Sen. Lindsey Graham (R-S.C.).

Others, like Graham and Giuliani, have opposed their subpoenas in court.

All of the 16 false Trump electors have been designated as “targets,” but one — Trump ally and state Sen. Burt Jones (R) — succeeded in disqualifying Willis from investigating him, after the DA headlined a fundraiser for Jones’s political opponent. Georgia’s Prosecuting Attorneys’ Council has not yet decided whether another DA will pick up Jones’s probe.

Despite that misstep, the DA’s office has large succeeded having its subpoenas upheld and dismissed challenges against them. Graham’s motion to quash is currently pending in federal court.