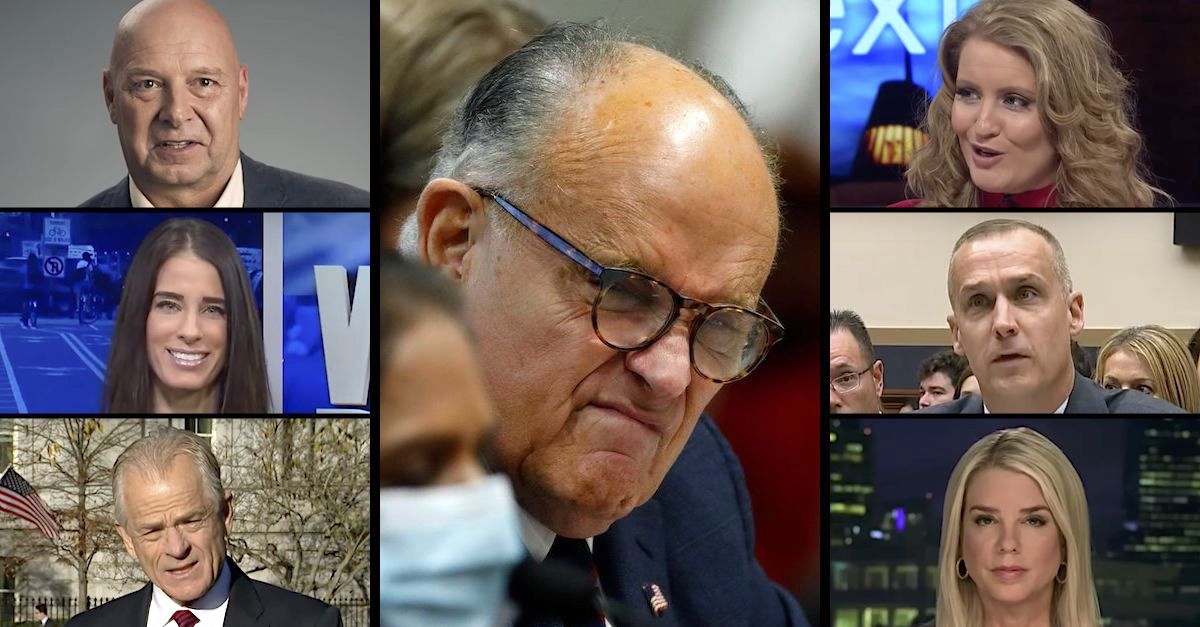 Professional conduct regulators with the Washington, D.C. Bar on Thursday filed a witness list and arguments to rebut Rudy Giuliani’s attempt to escape discipline in a probe connected to the former New York City mayor and Donald Trump attorney’s litigation strategy in the aftermath of the 2020 election. Giuliani on Friday responded in turn.

According to documents filed late this week, the Washington, D.C. Bar’s disciplinary counsel plans to call the following to testify at an upcoming hearing: Giuliani, Daniel R. Ortiz, and Matthew T. Sanderson. Ortiz is a law professor at the University of Virginia. Sanderson is an attorney and member of the political law group at the law firm Caplin & Drysdale.

Giuliani’s witness list is a recitation of well-known conservative names — many of whom peddled since-scuttled legal theories that the 2020 election had been stolen.

Giuliani’s list, and his explanation for what each individual will allegedly add to the proceeding, reads as follows, verbatim:

1. Rudolph W. Giuliani will testify that he had a reasonable basis to make the arguments that he made on behalf of his client then President Trump in the Pennsylvania litigation.

2. Christina Bobb, Esq. will testify that through her investigative work she spoke to people who witnessed voting irregularities and allegations of fraud.

3. Pam Bondi, Esq. former Attorney General of the State of Florida will testify that she was on the ground in Pennsylvania and witnessed in Philadelphia the exclusion of Republican inspectors and poll watchers including herself from inspecting any ballots.

5. Julie Levin, Esq. will testify that she assisted in assembling Respondent’s legal team and was aware of pressures and stresses placed on the attorneys in the attempt to deter them from assisting in the representation of then President Trump.

6. Colonel Phil Waldron will testify as to the methods that were employed by staff to analyze the nature of the irregularities and alleged voting illegalities.

7. Dr. Shiva Ayyadurai will testify as to the statistical analysis as to voting results.

8. Corey Lewandowski will testify that he was on the ground in Pennsylvania and in Philadelphia he witnessed the exclusion of Republican inspectors and poll watchers including himself from inspecting any ballots.

9. Peter Navarro will testify as to his extensive analysis of voting irregularities and alleged illegalities.

10. Russell Ramsland will testify as to statistical analyses of the then available voting records.

11. Douglas Mastriano will testify as to the gathering of evidence of voting irregularities and alleged illegalities and arranged for and presided over the Gettysburg hearing.

12. Michael Roman will testify that as the chief investigator in Pennsylvania for the Trump campaign he conveyed to Respondent incidents of voter irregularities and allegations of fraud.

13. Joann Miller will testify that she assisted Peter Navarro in gathering information for his reports and conveying information to Respondent’s staff.

14. John Droz, Jr. will testify as to his report on irregularities and improprieties in the Pennsylvania election which was conveyed to Respondent at the time of the Pennsylvania litigation.

15. Jenna Ellis, Esq. will, testify that she was the number two lawyer on the then President Trump’s Pennsylvania litigation team.

16. Jeremy Mercer, Esq. will testify that he was in charge of numerous Republican inspectors and poll watchers who were excluded from inspecting ballots.

17. Bernard Kerik will testify that he was one of the chief investigators into the irregularities and allegations of fraud in the Pennsylvania Presidential election and in the subject litigation.

None of the elections cases pressed by Giuliani or any of Trump’s other lawyers were successful.

Bloomberg Law’s Zoe Tillman described Giuliani’s strategy as one of “calling a string of witnesses who promoted baseless claims that the 2020 election was marred by widespread fraud.”

The Washington, D.C. discipline case against Giuliani is akin to the concept of reciprocal discipline.  The case alleges that Giuliani violated professional conduct rules in Pennsylvania when he appeared in Donald J. Trump for President, Inc. v. Boockvar in U.S. District Court for the Middle District of Pennsylvania. Authorities in D.C. can discipline him, according to the rules, if they ascertain that a violation in that jurisdiction warrants a domino effect in their jurisdiction.

“Disciplinary Counsel alleges that Respondent made various claims in that case without any factual or legal basis for doing so, including that election fraud occurred in the 2020 presidential election and asking the Court to invalidate up to 1.5 million votes,” reads a pre-hearing memorandum document filed on Thursday by D.C. Bar regulators.

The disciplinary counsel in the nation’s capitol attempted to cite — and then to refute — Giuliani’s arguments:

Respondent has argued to Disciplinary Counsel that he “was representing a client in a fast-moving election law challenge matter that did not permit him to investigate fully his client’s position as he would normally do in any other case.” Separately, he has argued that he appeared in the Boockvar litigation “virtually at the last minute, relied on information provided by attorneys, experts and the information that was collected by the former President’s campaign team in Pennsylvania in an extremely truncated, novel, and complex statewide election in a federal court proceeding.”

The disciplinary counsel rubbished that argument with the following:

Whether the Boockvar litigation was complex and fast moving is no defense. Election challenges are by their nature expeditiously decided. Pennsylvania has an established procedure for contesting the results of a presidential election, which includes mechanisms for a rigorous fact-finding process and an expedient trial in state court to reach a final determination. See 25 Pa. Stat. Ann. § 3456 et seq. Respondent did not file such an election contest, but instead opted to proceed with a civil lawsuit in federal court under 28 U.S.C. §§ 1331 and 1343. Respondent must be held to the same standard of conduct as any other litigator who elects to bring such an action.

The D.C. document says whatever inferences Giuliani made from what little evidence he had at his disposal are best described as “speculation or conjecture” — not the sort of material that can properly support a federal court case.

Disciplinary Counsel’s experts will testify that the evidence in the Boockvar litigation, even when considered in its totality, does not support a reasonable inference that election fraud occurred in Pennsylvania’s 2020 presidential election. At very best, Respondent’s evidence might demonstrate the opportunity to commit fraud, not the actual commission of fraud. There is no presumption that because a person had the opportunity to commit fraud, he did so. To the contrary, Respondent was required to offer evidence, circumstantial or other, of actual fraud. Disciplinary Counsel’s evidence will show that he did not do so.

The disciplinary counsel also noted that Giuliani at one point cited an “outdated version” of the Federal Rules of Civil Procedure to defend himself. The current rule, the counsel noted, was passed in 1993 — plenty of time for Giuliani to read it.

The disciplinary counsel also attempted to jettison Giuliani’s assertions that he was being “censored” for supporting Donald Trump — a candidate who Giuliani suggested was unfairly treated as “public enemy number one.”

The implication of Respondent’s argument, and a defense Disciplinary Counsel anticipates he will raise, is that imposing discipline in this matter is both politically motivated and has the potential to chill zealous and creative advocacy on behalf of unpopular clients or causes. But Respondent was not representing accused members of the Communist Party in the McCarty era or civil rights workers in 1963 Alabama. A former President of the United States, who received in excess of 74 million votes in his reelection campaign, would not seem to qualify for the role of public enemy number one or the status of underdog. But the unpopularity of Respondent’s client, assuming that accurately characterizes the situation, cannot shield Respondent from the consequences of his actions. There will be no evidence of improper motivation in bringing these charges, and the issue is a red herring. It is the role of the Committee, and ultimately the Board and the Court, to determine whether Respondent’s conduct violated the Rules as charged, regardless of the motivation of his accusers. If the determination is that he did so, it is perfectly appropriate to discipline him in order to deter others from engaging in similar misconduct in the future.

The D.C. Bar filed disciplinary charges against Giuliani on June 6.  The charges allege that Giuliani “brought a proceeding and asserted issues therein without a non-frivolous basis in law and fact for doing so” and “engaged in conduct prejudicial to the administration of justice.”

No specific manner of discipline was expressly sought; D.C. regulators explicitly said that they would leave the choice of “appropriate discipline” — if any is deemed warranted — up to the District of Columbia Court of Appeals Board on Professional Responsibility.

The documents referenced in this report are available here.