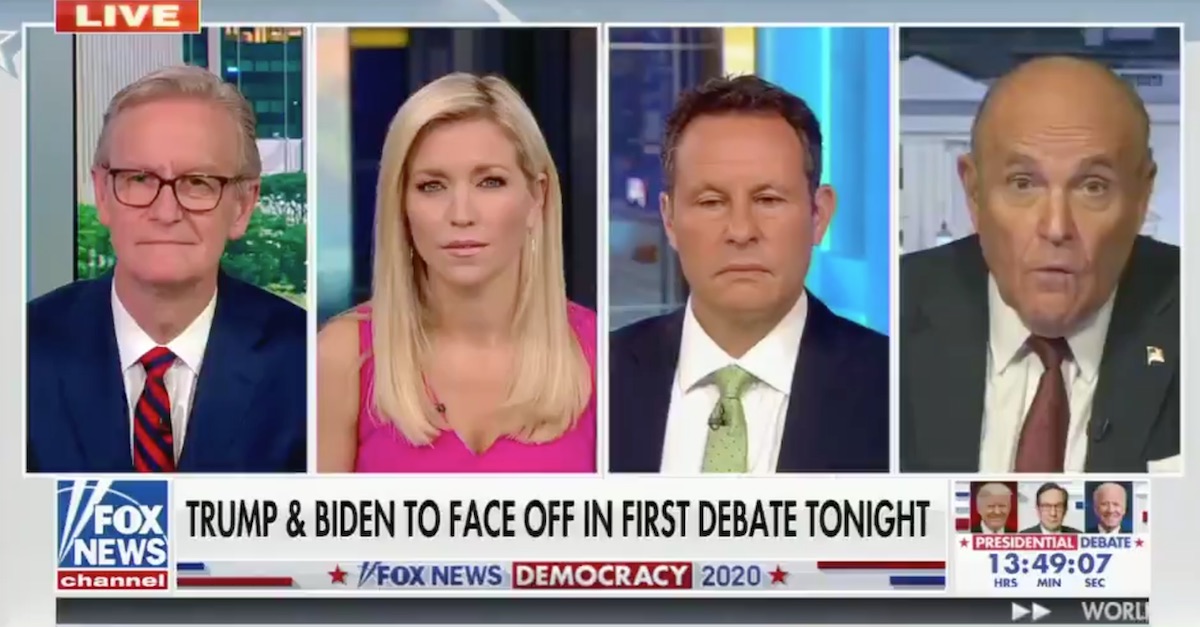 President Donald Trump’s personal attorney Rudy Giuliani went on Fox & Friends on Tuesday, a matter of hours ahead of the first presidential debate, and declared that there is “no doubt” Joe Biden has “dementia.” Giuliani also amplified the president’s calls for Biden to take a drug test.

“The man has dementia. There’s no doubt about,” Giuliani chuckled. “I’ve talked to doctors. I’ve had them look at 100 different tapes of his five years ago and today.”

Giuliani, 76, responded with a noise akin to ululation that might make Shakira frown.

On Fox & Friends, Rudy Giuliani says Joe Biden "has dementia. There's no doubt about it. I've talked to doctors. … The president's quite right to say maybe he's taken adderall." The hosts get visibly uncomfortable. pic.twitter.com/2Ma7DKNBpS

“He can’t recite the Pledge of Allegiance and he’s fine? He’s been a—he was in the Senate for 160 years. I mean, he can’t do the prologue to the, to the Const—to the, uh, Constitution of the United States or the Declaration of Independence,” Giuliani stumbled. “He can’t do numbers. WOW are the numbers screwed up.”

“He actually displays symptoms that two gerontologists told me are classic symptoms of middle level dementia,” Giuliani continued. Fox News hosts could be heard saying “right” as if to hint that the segment should move on.

“He’s got eight of the 10” symptoms of dementia, Giuliani continued.

Giuliani closed by saying that Trump was right to say Biden has probably taken Adderall.

Then Doocy jumped in.

“And that’s why the president wants to do a drug test. But, you know, none of us are doctors. This is just—that’s your opinion,” he said.

“No, it’s not just my opinion. It’s the opinion of doctors I’ve actually interviewed,” he answered.

Then the conversation shifted to the Supreme Court.

President Trump said as recently as Sunday that he would demand that Biden take a drug test.

I will be strongly demanding a Drug Test of Sleepy Joe Biden prior to, or after, the Debate on Tuesday night. Naturally, I will agree to take one also. His Debate performances have been record setting UNEVEN, to put it mildly. Only drugs could have caused this discrepancy???

“I will be strongly demanding a Drug Test of Sleepy Joe Biden prior to, or after, the Debate on Tuesday night. Naturally, I will agree to take one also. His Debate performances have been record setting UNEVEN, to put it mildly. Only drugs could have caused this discrepancy???” Trump said on Sunday.