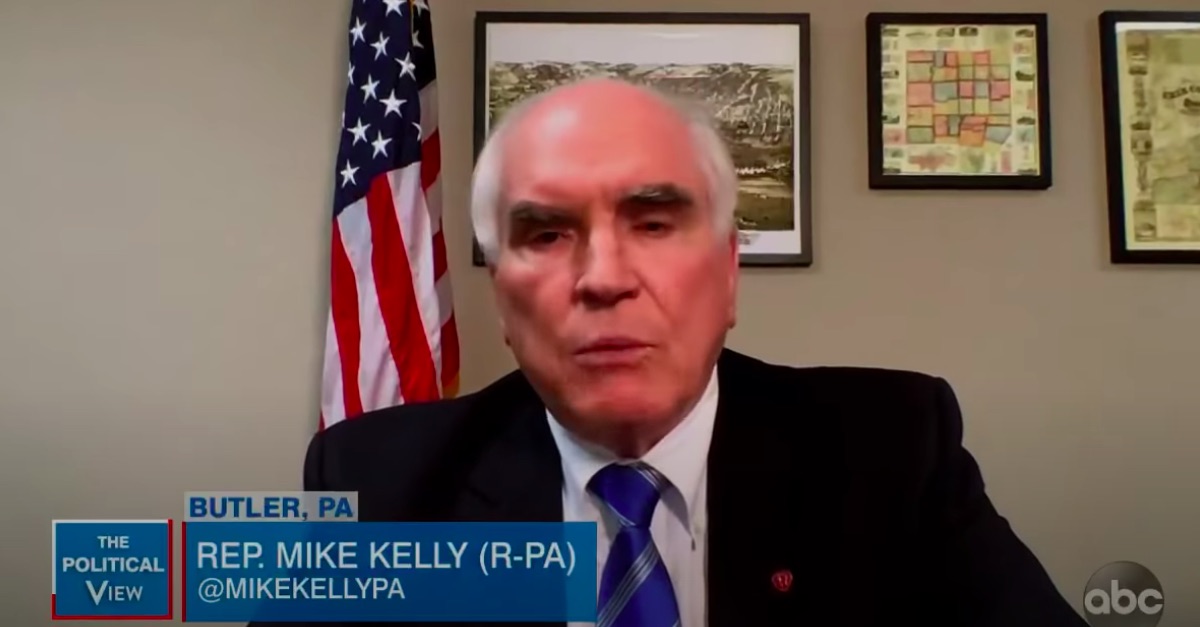 Rep. Mike Kelly, who claimed that he was harmed by his own reelection and touts himself as a pro-Trump Pennsylvania Republican, asked the U.S. Supreme Court on Tuesday to issue an emergency injunction preventing the commonwealth from perfecting the results of the 2020 presidential election just days after the Pennsylvania Supreme Court dismissed the lawsuit with prejudice.

The lawsuit alleged that Pennsylvania Gov. Tom Wolf and Secretary of the Commonwealth Kathy Boockvar, both of whom are Democrats, violated the commonwealth’s constitution by allowing universal mail-in voting to occur for the 2020 election pursuant to a state law which Kelly and the other plaintiffs claim conflicts with, and therefore violates, the state constitution.

The commonwealth’s high court on Saturday was blunt and brief in its three-page takedown of Kelly’s lawsuit.

“As a remedy, Petitioners sought to invalidate the ballots of the millions of Pennsylvania voters who utilized the mail-in voting procedures established by Act 77 and count only those ballots that Petitioners deem to be ‘legal votes,’” the unsigned per curiam opinion stated.  (Act 77 promulgated much of Pennsylvania’s vote-by-mail plans.)

The court didn’t address much of the complaint’s outrageous claims, instead tossing the suit because the plaintiffs waited too long to challenge the law—which was passed in 2019—calling it a “complete failure to act with due diligence in commencing their facial constitutional challenge, which was ascertainable upon Act 77’s enactment.” The court noted that the challenge came after the election.

Tuesday’s Supreme Court emergency application was directed to Justice Samuel Alito, the justice who oversees such applications in the Third Circuit. It’s unclear what Alito will do, but it should be noted that the Supreme Court has been reticent in recent weeks to get involved in another Pennsylvania case before the court.

“The 2020 Election is now over. President-Elect Joseph Biden defeated President Donald Trump by over 80,000 votes in Pennsylvania,” Shapiro wrote in the brief. “Of the approximate 6.9 million votes cast, counties have reported only 9,428 mailed-in ballots that were received during the three-day extension at issue. The number of challenged ballots is insufficient to change the outcome of the Presidential election (or any other federal election in Pennsylvania). Nonetheless, this petition remains.”

Seeking extreme relief, Kelly’s application asks the court to compel Boockvar and Wolf to “nullify any such actions already taken, until further order of this court.”

“Interesting choice for Justice Alito: He can deny the application in his capacity as Circuit Justice or he can order Pennsylvania to respond — and presumably then refer the matter to the full #SCOTUS,” he wrote. “The former would be a loud message to Team Trump; the latter would be a punt.”

Interesting choice for Justice Alito: He can deny the application in his capacity as Circuit Justice or he can order Pennsylvania to respond — and presumably then refer the matter to the full #SCOTUS.