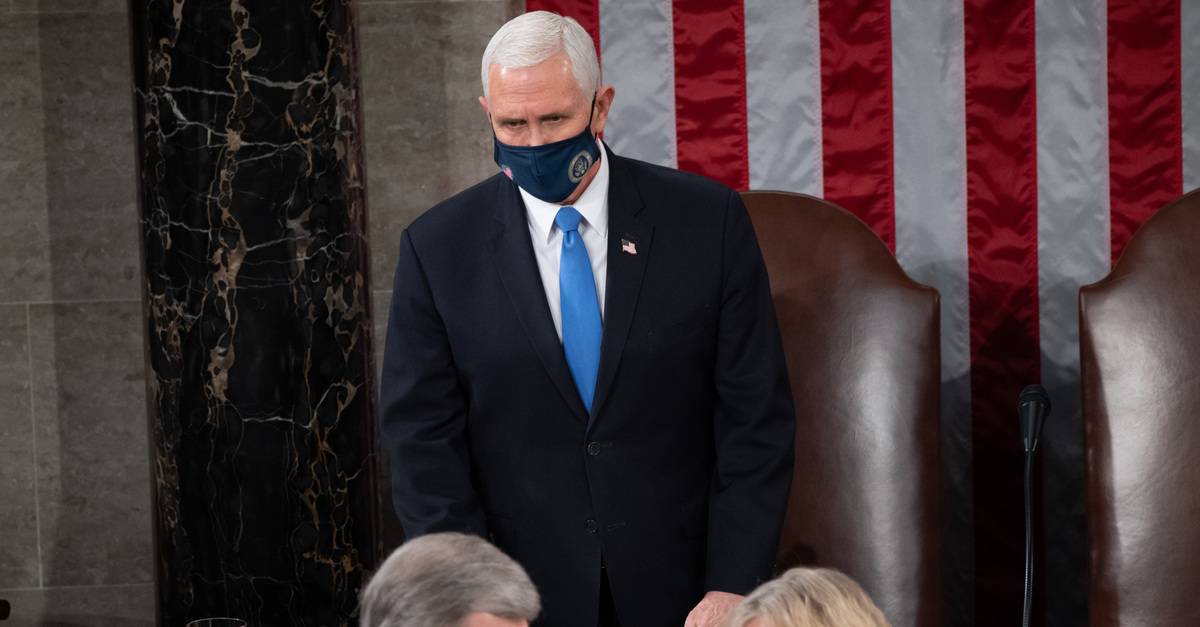 Vice President Mike Pence broke with President Donald Trump on Wednesday afternoon by declining to support a challenge to the validity of the 2020 election just moments before Capitol Hill devolved into an extraordinary scene of mob violence.

In a three-page letter to the U.S. Congress, Pence uncharacteristically defied his boss and patron for the first time in his political career. Pence’s move left Trump with one less institutional supporter for the 45th and lame duck president’s increasingly quixotic determination to maintain grasp on state power in Washington, D.C.

“It is my considered judgment that my oath to support and defend the Constitution contains me from claiming unilateral authority to determine which electoral votes should be counted and which should not,” Pence wrote in the message.

“Our Founders were deeply skeptical of concentrations of power and created a Republic based on separation of powers and checks and balances under the Constitution of the United States,” Pence went on to explain. “Vesting the Vice President with unilateral authority to decide presidential contests would be entirely antithetical to that design.”

The president responded to Pence’s abandonment of his lost cause — to remain in office — in typical fashion.

“Mike Pence didn’t have the courage to do what should have been done to protect our Country and our Constitution, giving States a chance to certify a corrected set of facts, not the fraudulent or inaccurate ones which they were asked to previously certify,” Trump tweeted. “USA demands the truth!”

Public response to Pence’s 11th hour break with the MAGA movement was mixed. Many online comments expressed gratitude for the stance while an equal number suggested that the vice president’s words evidenced the behavior of rodents aboard leaky boats.

Legal experts were largely nonplussed by the vice president’s last-second break with the White House.

“Even Mike Pence has limits: who knew?” mused national security attorney Bradley P. Moss in a message to Law&Crime.

True to Republican Party messaging, however, Pence also used the opportunity to repeat baseless accusations that the 2020 electoral contest was somehow not on the up and up.

“After an election with significant allegations of voting irregularities and numerous instances of officials setting aside state election law, I share the concerns of millions of Americans about the integrity of this election,” the vice president alleged.

“The American people choose the American president, and have every right under the law to demand free and fair elections and a full investigation of electoral misconduct,” he continued. “As presiding officer [of the U.S. Senate], I will do my duty to ensure that these concerns receive a fair and open hearing in the Congress of the United States. Objections will be heard, evidence will be presented, and the elected representatives of the American people will make their decision.”

But before that electoral college count could happen, hundreds of Trump adherents — as judged by their flags and clothing — quite literally stormed the U.S. Capitol Complex. Their move prompted an evacuation of U.S. senators and representatives via a network of underground tunnels.

Pence himself was quickly moved to a secure location to avoid the possibility of violent retribution by those who once supported him.