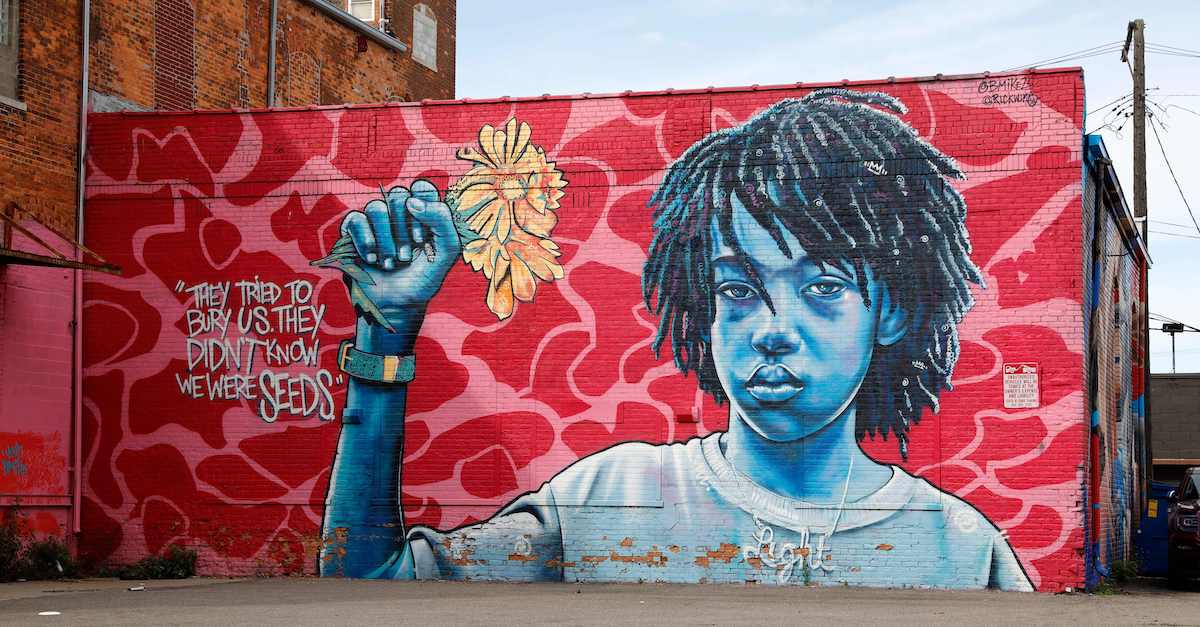 A mural is seen in Eastern Market in Detroit, Michigan, on October 24, 2019, part of the Murals in the Market project which has created over 100 murals over the years. In majority-black Detroit, and nationwide, African-Americans overwhelmingly support Democrats.

President Donald Trump’s campaign wants to disenfranchise nearly half of Michigan’s Black population through a federal lawsuit as “unprecedented” as it is “unconscionable,” the Wolverine State’s NAACP branch said in a blistering legal filing on Wednesday.

“Over a week after the presidential election ended, and after all votes across Michigan had been properly counted, the [Trump campaign and its allies] filed this lawsuit, seeking to throw out results from just one of Michigan’s 83 counties,” attorney Eugene Driker wrote on behalf of the Michigan Conference of the NAACP. “By targeting Wayne County, the Plaintiffs’ requested relief would effectively disenfranchise over seven hundred and fifty thousand voters, including nearly half of Michigan’s Black population.”

The NAACP notes that the Trump campaign asked for this mass purge of Black voters on the basis of little evidence:

Plaintiffs argue that this undemocratic, heavy-handed, and racially disproportionate remedy is necessary to address vague, unsubstantiated claims about alleged voter fraud, purported irregularities with voting machines, duplication of ballots, and other aspects of election administration impacting a small number of votes, and the amount and quality of access Republican challengers had to review election processes and alleged interference with that access.

The Trump campaign’s legal team behind their Western District of Michigan is led by the same lawyer who failed in state court: Thor Hearne of the St. Louis-based True North Law firm, whose “hearsay within hearsay” evidence left one judge so unimpressed that she scolded: “Come on now!” Hearne also made the news for filing an election lawsuit in a court that had no authority to hear the case.

In the state court case, the double-hearsay in question came from Jessica Connarn, a designated poll watcher whose affidavit the campaign included to bolster its arguments, but her sworn testimony about a rumor she heard from an unidentified person failed to impress Michigan Court of Appeals Judge Cynthia Stephens on Nov. 6.

“The assertion that Connarn was informed by an unknown individual what ‘other hired poll workers at her table’ had been told is inadmissible hearsay within hearsay, and plaintiffs have provided no hearsay exception for either level of hearsay that would warrant consideration of the evidence,” Stephens wrote at the time.

Undeterred, the Trump campaign’s legal team is giving federal court a try, with their case landing on the docket of U.S. District Judge Judge Janet Neff, a George W. Bush appointee. Wayne County certified its election results on Tuesday night after Republicans on the board of canvassers initially tried to invalidate the will of the county’s voters.

In another legal brief filed in the same federal case, the city of Detroit stated bluntly that the Trump campaign does “not expect to win.”

“Having lost the State of Michigan by more than 146,000 votes, no recount, no audit, no judicial review could possibly change the outcome of the election,” the city’s lead attorney David Fink noted in a 23-page legal brief. “Instead, a judicial ‘victory’ for the Trump campaign would lead to only two possible outcomes: (1) a delay so severe that Michigan loses its ability to appoint its electors in time to cast their votes; or (2) a process that gives credence to the conspiracy theories that call into question the integrity of our elections and undermine our democracy.”

Behind these machinations, Detroit spotted a “more sinister purpose.”

“The only logical purpose of this lawsuit is to give supporters of President Trump a talking point, something they can use to bolster their baseless claims of widespread voter fraud,” it continues. “Something to sow doubt about the integrity of the presidential election.”

Fink noted that the fact that the Trump campaign waited until shortly before certification to file the lawsuit exposes the game behind their alleged request for “emergency” relief.