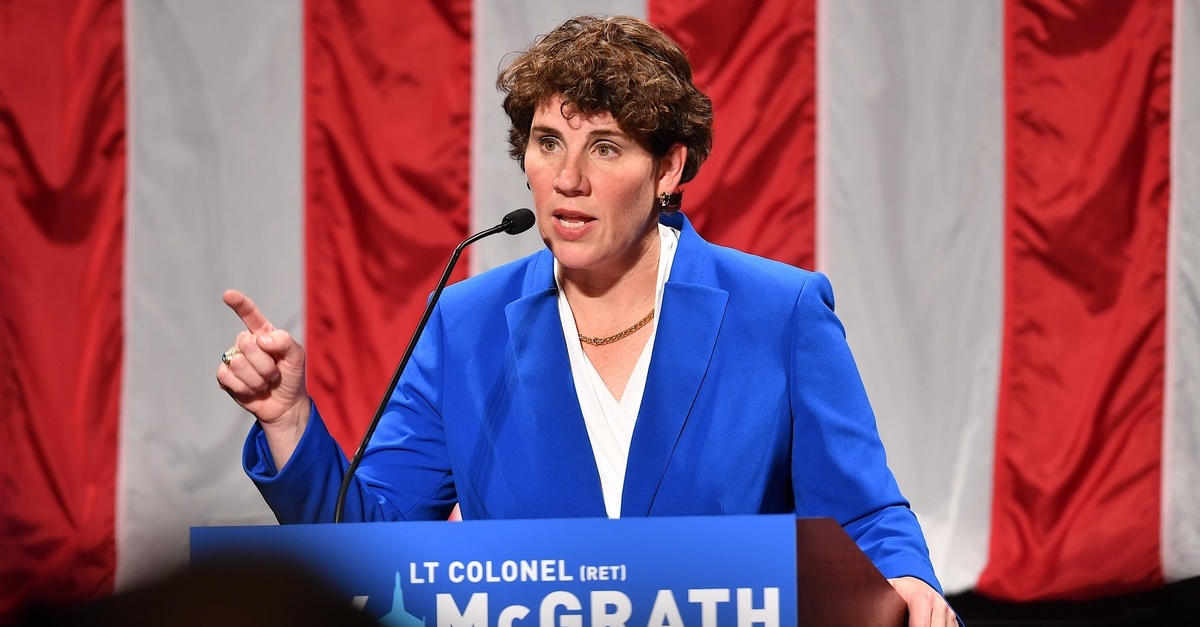 Kentucky Secretary of State Michael Adams (R) on Tuesday won the dismissal of a lawsuit filed by Amy McGrath, a Democratic Party Senate candidate, against the commonwealth’s absentee ballot system.

In a statement welcoming that dismissal, Adams characterized the McGrath campaign’s legal effort as a “last-minute” attempt “to game the electoral system” that would have resulted in “confusing and disenfranchising voters on a mass scale.”

“On April 24, Governor [Andy] Beshear and I reached a bipartisan agreement to expand voting options and ensure voting would be both safe and convenient for the June 23 election,” Adams said. “We negotiated this agreement two months before election day in order to provide clarity for election officials, candidates and voters.”

“However, on June 12, the McGrath campaign sued the Governor she has been on paid radio praising, and challenged the plan she has been on paid radio endorsing,” the secretary of state continued. “The McGrath campaign asked a federal judge to declare unconstitutional ‘the current system of absentee voting’ that Governor Beshear and I worked so hard in good faith to establish, so that we could protect Kentucky voters from the coronavirus.”

Adams also claimed that McGrath’s lawsuit, if successful, could have invalidated many already-cast absentee ballots.

“Most troubling is that the McGrath campaign took aim at the overall bipartisan agreement, seeking to have it declared unconstitutional, potentially invalidating the votes that hundreds of thousands of Kentucky voters already have cast safely from home,” the secretary of state said.

Filed on June 12 as a motion to intervene in an already extant federal lawsuit, McGrath cast her legal challenge as an effort to secure more polling locations and extend the absentee ballot deadline for the Bluegrass State’s upcoming primary election.

McGrath’s intervention put her at odds with both Adams, a Republican, and Beshear, the state’s Democratic governor, who agreed in April that all Kentuckians would be allowed to vote by mail and to push back the election date from May to June. The ultimate form of that agreement left the number of physical polling locations up to individual counties–pending approval from the state elections board–and set the absentee ballot-request deadline to June 15.

The campaign’s lawsuit sought to extend the absentee ballot request deadline to June 21. Adams said such an extension “would not allow time for ballots to be timely delivered to voters and then returned – thus confusing and disenfranchising voters on a mass scale.”

The secretary of state also rubbished McGrath’s efforts to have her campaign “complete ballot requests over the phone, just as Clerks are able to do” as a “conflict of interest” and “an invitation to election fraud.”

McGrath, a retired Marine fighter pilot, previously praised agreed-upon elections measures in statements and paid advertisements but attempted to join the lawsuit against it late last week. Her apparently shifting stance on the system earned her a significant amount of ire from Adams.

“Amy McGrath called the plan ‘a win for democracy,’ and even just recently the McGrath campaign aired a radio ad called ‘A Lot Easier’ that praised Governor Beshear for this plan,” the secretary of state noted. “I will always defend the sanctity of our elections, and I am glad to have stopped a hypocritical lawsuit that was a direct threat to this election.”

McGrath, who has been described as “centrist,” is facing two progressive challengers in the Democratic primary election: Kentucky State Rep. Charles Booker and retired Marine Mike Broihier, who is currently a teacher and farmer. The winner of that contest will go on to challenge Senate Majority Leader Mitch McConnell (R) in the November general election.

“Candidates should not attempt to game the electoral system to gain an advantage over their competitors, nor should they destabilize an already challenging election by trying to rig its rules mere days before it occurs,” the Adams statement concluded. “The McGrath campaign’s lawsuit was manifestly unfair to the Booker campaign, the Broihier campaign, and her other competitors, and repugnant to all Kentucky voters who want a fair election.”