Jay Sekulow Accuses Some Trump Supporters of ‘Quasi-Anarchy’: ‘That’s Not Good for a Constitutional Republic’ 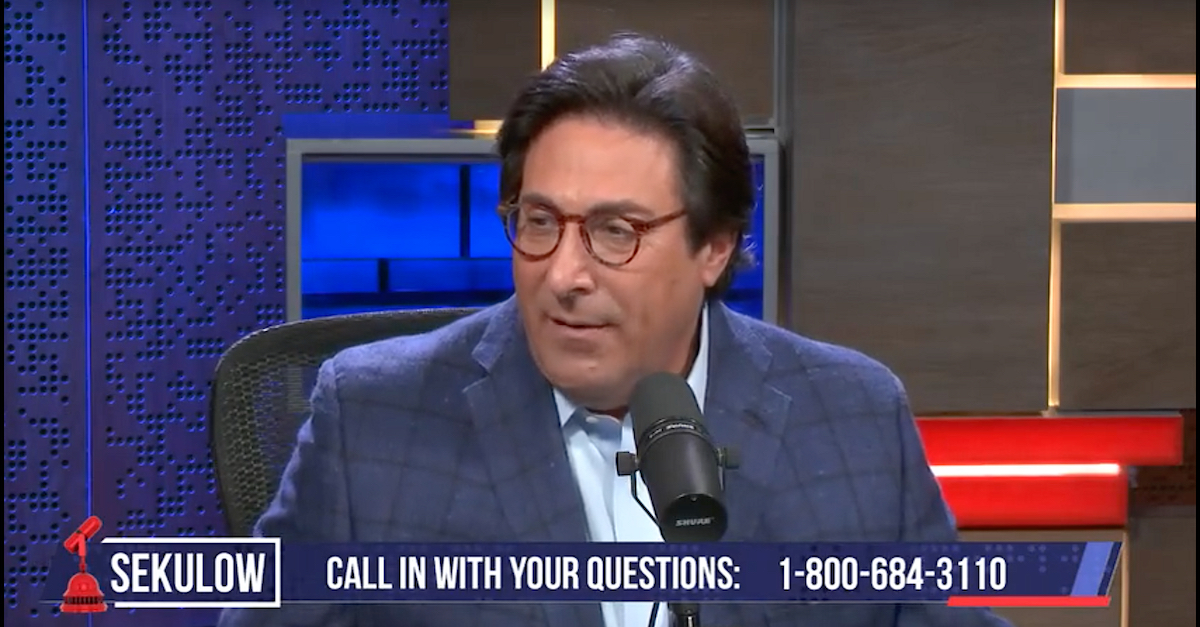 Conservative attorney Jay Sekulow, who is also counsel to President Donald Trump, bailed Tuesday on theories that Vice President Mike Pence could or should materially and unilaterally alter the Electoral College’s selection of Joe Biden as President of the United States.

“The idea is the Vice President could make the selection of electors,” Sekulow said to recap and ultimately deflate several theories popular among pro-Trump Republicans on his radio show. “That’s just not true.”

Such a procedure would result in there being “no guiderails” against the actual stealing of elections, a guest then said.

“No, because then, Kamala Harris, if they came into office, and the next election’s in 2024 — so let’s say President Trump or another Republican or whoever wins the next election, and she [Harris] just says, ‘I’m not going to accept the electors from these five states.'”

In other words, Sekulow fears Harris using the tactic, and that’s part of the reason he says it’s not allowed.

“There’s no way that’s what the constitution means,” he later said.  “So we should not put a false expectation on Mike Pence.”

However, Sekulow also suggested that maybe, if Congress voted against a particular state’s slate, Pence could entertain asking states to re-certify their election results.  But Sekulow admitted he “wasn’t sure” on this scenario.

Sekulow addressed and dismissed arguments by Trump supporters that conservative attorneys were “giving up” by failing to successfully attack the certified results of the election in favor of Biden. Sekulow said he and others have “fought on every front” for Trump but that the constitution and laws needed to be respected. In essence, he argued that extreme positions were being hatched by too many people yearning for victory at any cost — and that those people were stretching the constitution too thin (if not shredding it).

Sekulow then quoted Barack Obama: “the way it works is:  ‘elections have consequences.'”

He then waxed further on the Supreme Court’s recent refusal to take up election-related litigation.

“What was that relief?  Throw out the vote,” Sekulow reminded his viewers and listeners.

A guest then debunked the claim that alternate slates of state electors could be promulgated by various state legislatures and be considered by Pence without signatures by state governors. The Electoral College Act requires governors to sign off on such slates, he said, or they would not comply with federal law.

Indeed, per federal law, where disagreements occur, “the votes of the electors whose appointment shall have been certified by the executive of the State, under the seal thereof, shall be counted.”

Congress will meet at 1:00 p.m. Eastern time on Wednesday to certify the election.