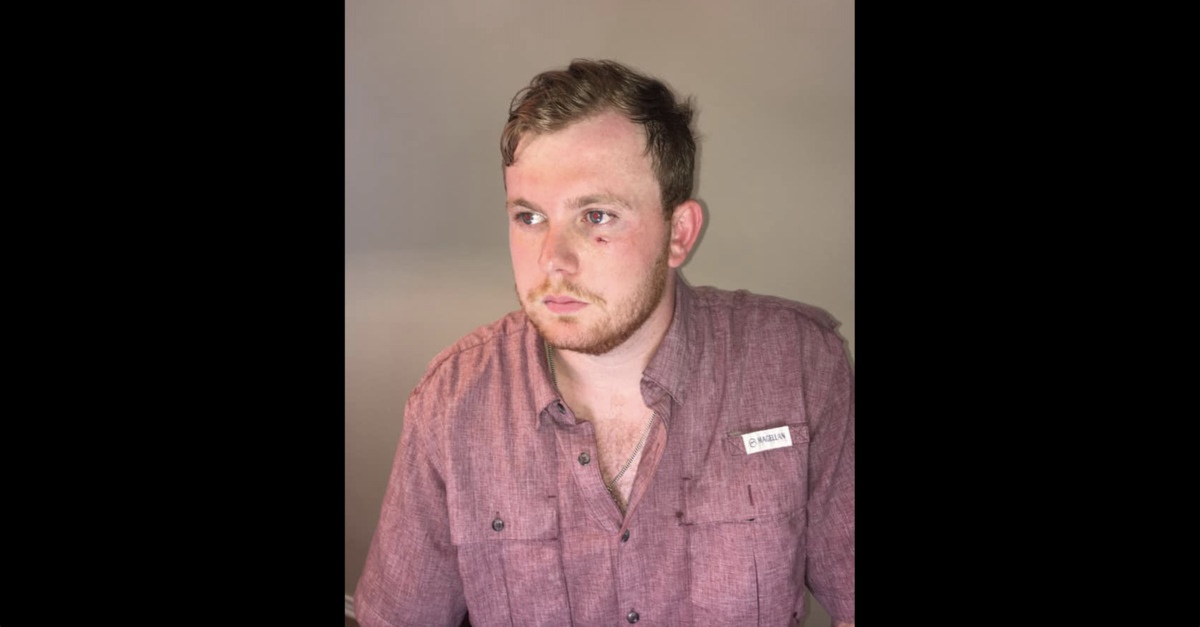 Ryan Miller works on the campaign of cattle rancher, anti-eminent domain activist, and Democrat Hank Gilbert. The alleged attack occurred in the midst of a protest against federal police actions in Portland–and a counter-protest–on Sunday in downtown Tyler, Texas.

“We had more than 100 people RSVP to participate in this protest, and were flooded with calls, texts, and emails in the 20 minutes before it began with folks telling us they would not be getting out of their cars after seeing the mass of armed counter-protesters who had descended upon the square,” Gilbert campaign consultant Vince Leibowitz told The Gilmer Mirror.

Gilbert previously promoted the rally via his social media feeds and asked his supporters to stand up “in the face of unconstitutional paramilitary oppression” while bemoaning that “downtown Portland has been illegally occupied” by federal forces.

Those forces have been identified as members of Customs and Border Protection (CBP) who are operating under the cross-authority of the Department of Homeland Security (DHS) and the Federal Protective Service, though the agents in question are not personally identifiable via badge numbers, name tags, or similar accoutrements Americans typically expect to see adorning law enforcement officers.

Gilbert told Law&Crime that Miller started his career as a professional gamer and is currently in college in Tyler, Texas–adding that Miller is likely going to need medical attention due to lingering headaches and jaw pain from the incident. The candidate said Miller’s wallet was also stolen but that his staffer is sanguine about the incident and committed to continue working on the campaign.

“Miller was attacked by at least four protesters, some of whom were armed, and sustained blows to the head and other parts of his body, as well as a large gash under his eye,” a press release from the Gilbert campaign alleged–while also accusing local law enforcement of effectively doing nothing about the violence. “The incident occurred as officers from the Tyler Police Department drove around the square idly, waving at the Blue Lives Matter counter-protesters who had come to support Gilbert’s opponent.”

My campaign manager, Ryan Miller, was assaulted, beaten, and had his iPhone stolen at our protest on the square in Tyler today by Blue Lives Matter protestors. Dozens and dozens of people who came to our protest were scared away by these thugs with guns and let our campaign know in phone calls and texts.

These thugs had every intention of starting a violent altercation from the minute we set foot on the square. They were chanting “Louie! Louie! Louie!” While my campaign manager was being beaten.

I call on Louie Gohmert to immediately denounce the violence that his supporters wrought today on peaceful protesters.

“Louie Gohmert needs to immediately denounce the violence that occurred in his name in downtown Tyler today,” Gilbert added in comments to Mirror. “When your armed thugs are shouting your name as they beat the hell out of a 21-year-old political operative, you need to get your people under control.”

The Texas Democrat also said he was asking Lone Star State’s chief executive to launch an investigation into the Tyler Police Department by way of the storied law enforcement agency the Texas Rangers.

“I immediately call upon Texas Governor Greg Abbott to direct the Texas Rangers to investigate why the Tyler Police Department was not actively working to prevent violence when more than 100 armed thugs descended on the square,” Gilbert continued. “I also call upon the city of Tyler to immediately undertake an internal investigation of this matter, to determine if proper procedures were followed.”

In a phone call, Gilbert said his campaign was readying a formal letter to Abbott, Texas Attorney General Ken Paxton and the Texas Legislature requesting the Texas Rangers take up the investigation.

Gohmert’s office told Law&Crime the congressman was unaware of the incident and traveling at the time the alleged attack occurred.

“He has consistently condemned violence and supports the president’s efforts to stop the riots in Portland,” a Gohmert spokesperson said.

[image via Hank Gilbert for Congress with permission]