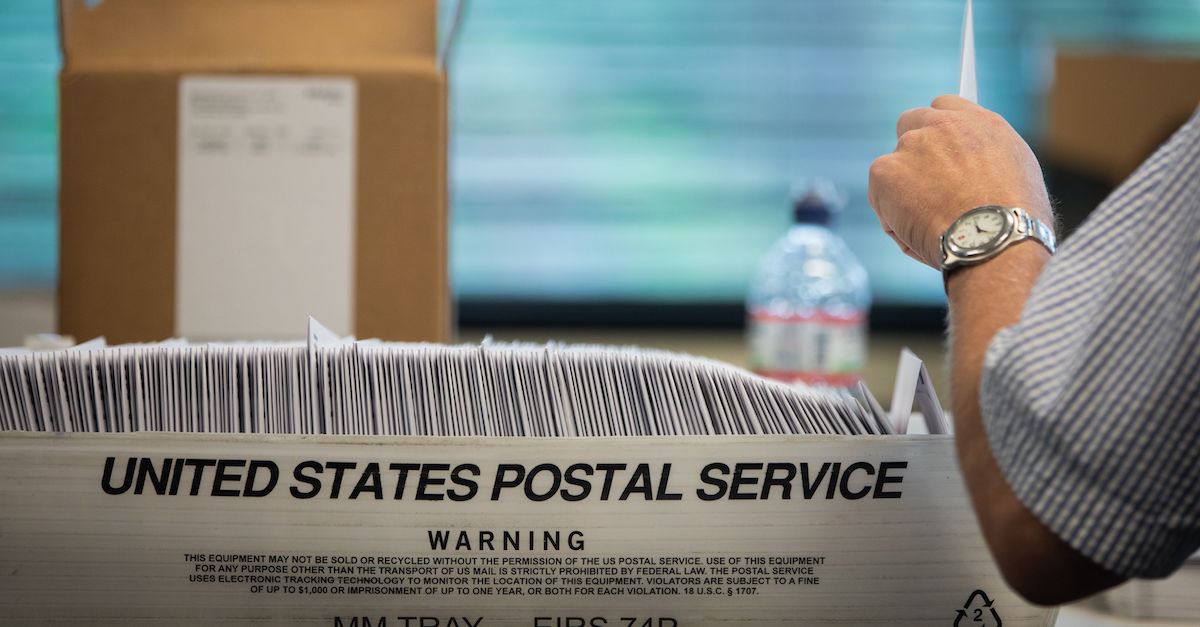 A federal appeals court in Wisconsin upheld voting restrictions that may lead to many voters’ mail-in ballots being tossed out by elections officials–and the lone dissenting judge on the three-judge panel had harsh words for the instantly controversial decision.

The battle here is of recent legal vintage but focuses on one of the major election-related issues facing courts and voters this fall: state deadlines for the return of mail-in ballots.

U.S. District Judge William Conley, a Barack Obama appointee, previously ruled that ballots postmarked by Election Day should be counted if received up to six days later–by November 9, 2020. Republicans called foul–as they repeatedly have on vote-by-mail expansion attempts. The GOP moved to make sure such votes would be invalidated.

Thursday’s decision is a direct reversal of a prior decision by the same three-judge panel issued late last month which did not address the merits of the case but decided that Wisconsin’s Republican-controlled legislature simply lacked standing to contest a lower court ruling in favor of the Democratic Party and voting rights advocates. After asking the Wisconsin Supreme Court to answer the standing question, the Seventh Circuit addressed the facts of the controversy.

“The State Legislature offers two principal arguments in support of a stay: first, that a federal court should not change the rules so close to an election; second, that political rather than judicial officials are entitled to decide when a pandemic justifies changes to rules that are otherwise valid,” the majority opinion says. “We agree with both of those arguments, which means that a stay is appropriate under the [relevant] factors [in Supreme Court case law.]”

Tulane Law Professor Ross Garber said the ruling was a “win” for Republicans via Twitter. University of Texas Law Professor Steve Vladeck tweeted that the decision would make “it harder for registered voters to vote.”

“This is a travesty,” Rovner writes, accusing her colleagues of adopting “a hands-off approach to election governance that elevates legislative prerogative over a citizen’s fundamental right to vote.”

The judge then excoriated the decision in no uncertain terms:

At a time when judicial intervention is most needed to protect the fundamental right of Wisconsin citizens to choose their elected representatives, the court declares itself powerless to do anything. This is inconsistent both with the stated rationale of Purcell and with the Anderson-Burdick framework, which recognizes that courts can and must intervene to address unacceptable burdens on the fundamental right to vote. The inevitable result of the court’s decision today will be that many thousands of Wisconsin citizens will lose their right to vote despite doing everything they reasonably can to exercise it.

The dissent also faulted the majority for taking words of “caution” issued by the Supreme Court about last-minute election law changes and fashioning them into a “rule” that has been used selectively.

Rovner’s criticism extended towards the structural as well, taking aim at and issue with the high court’s newfound reliance on its so-called “shadow docket.”

“In a series of stay rulings on its shadow docket since that decision, the Supreme Court has evinced a pronounced skepticism of judicial intervention in the weeks prior to an election but has put little meat on the bones of what has become known as the Purcell doctrine,” the dissent noted–before also pointing out that the John Roberts court judicially intervened during Wisconsin’s primary on the same issue.

“Although the [Supreme] Court had critical things to say about the last-minute change in rules ordered by the district court’s injunction (in part because the district court had ordered relief beyond what the plaintiffs themselves had requested), it then proceeded to impose one of its own, ordering that absentee ballots must either be delivered or postmarked on or before election day in order to be counted,” Rovner noted.

The dissent went on to say that U.S. District Judge Conley issued his original order invalidating the stringent ballot return deadline “six weeks prior to the election” and argued that this left “ample time for Wisconsin election officials to alter election practices as ordered and communicate the changes to the public.”

Rovner additionally criticized the decision by her colleagues as an egregious burden placed on voters amid the ongoing novel coronavirus (COVID-19) pandemic.

“I submit that our foremost duty in this case is to protect the voting rights of Wisconsin citizens, which are seriously endangered, rather than discretionary action (or inaction) by one branch of state government, in the face of a pandemic,” she wrote. “To the extent [Conley’s] modifications intrude modestly upon the State’s ability to establish its own rules for conducting elections, they are more than justified by the present pandemic and the unacceptable risks that in-person voting presents to the citizens of Wisconsin.”

We are seven months-plus into this pandemic. The Legislature has had ample time to make modifications of its own to the election code and has declined to do so. The Wisconsin Elections Commission, divided 3-3 along party lines, concluded that it lacks the authority to order such modifications. This leaves voters at the mercy of overworked state and local election officials, a hamstrung Postal Service, and a merciless virus. What we must ask, as Judge Conley did, is whether Wisconsin’s election rules, which were not drafted for pandemic conditions, effectively restrict a Wisconsin citizen’s right to vote under current conditions. The answer, I submit, is yes.

“Today, in the midst of a pandemic and significantly slowed mail delivery, this court leaves voters to their own devices,” Rovner concluded.