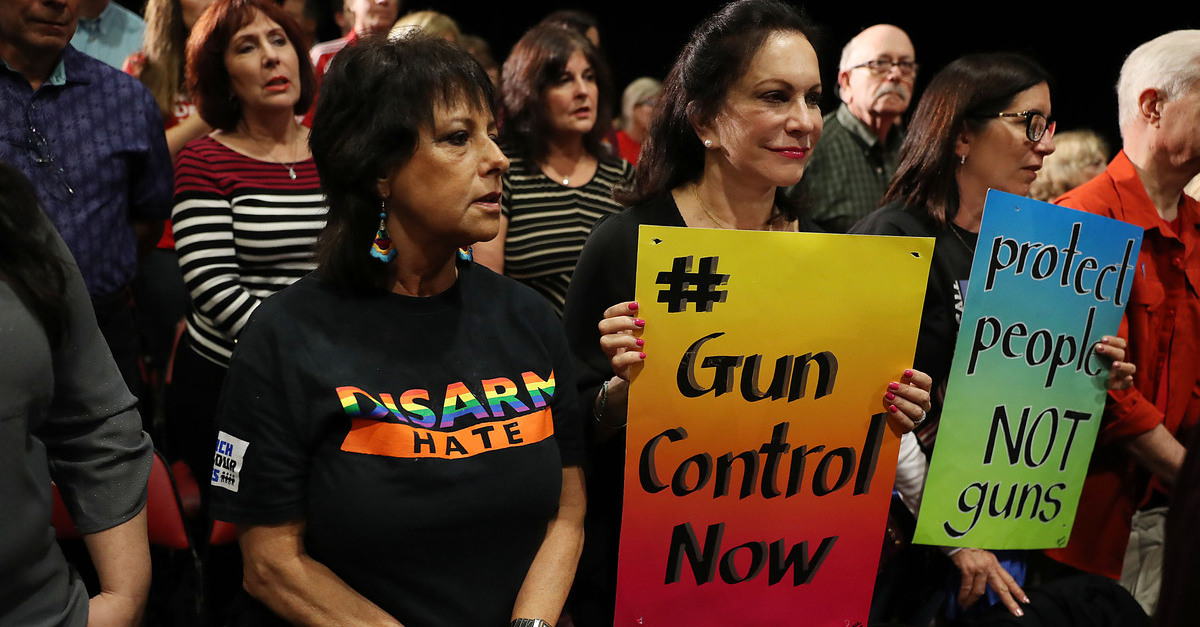 People listen as Rep. Eric Swalwell (D-CA) speaks during a gun violence town hall at the BB&T Center on April 09, 2019 in Sunrise, Florida. Rep. Swalwell held the town hall not far from Marjory Stoneman Douglas high school which was the site of a mass shooting in 2018.

The Florida Supreme Court has removed a citizen-backed initiative from the November ballot that would define and ban “assault weapons” over ancillary language deemed “misleading.”

In a per curiam decision–issued in the name of the court rather than listing the specific judges involved–the conservative majority voted 4-1 against a lone centrist holdout to scrap the initiative due to a discrepancy between the text of the proposed statute and a summary of what the proposed statute actually prohibits.

Ballot summaries are necessarily brief and mandated under Florida law. They must appear on ballots for voters to understand the impact of any given effort to amend the Sunshine State’s Constitution.

Sponsored by the Miami-based group Ban Assault Weapons NOW, the proposed initiative would have defined and codified the controversial term “assault weapons” in Florida law and banned the purchase of most rifles.

Handguns were expressly left alone and so-called “assault weapons” would have included: “any semiautomatic rifle or shotgun capable of holding more than ten (10) rounds of ammunition at once, either in a fixed or detachable magazine, or any other ammunition-feeding device.”

A retroactivity provision in the initiative would have allowed current rifle owners to remain in good standing with the proposed law so long as they registered their rifle(s) within one year of the law’s passage.

The judges, however, claimed not to have actually had any problem with the proposed language of the law itself. Rather, their ruling placed the blame on the language used in the ballot summary.

The ballot summary provided by the group reads:

Prohibits possession of assault weapons, defined as semiautomatic rifles and shotguns capable of holding more than 10 rounds of ammunition at once, either in fixed or detachable magazine, or any other ammunition feeding device. Possession of handguns is not prohibited. Exempts military and law enforcement personnel in their official duties. Exempts and requires registration of assault weapons lawfully possessed prior to this provision’s effective date. Creates criminal penalties for violations of this amendment.

But, according to the judges, the second-to-last sentence contained a fatal flaw.

That sentence purportedly “Exempts and requires registration of assault weapons lawfully possessed prior to this provision’s effective date.”

Per the Florida Supreme Court’s decision [emphasis in original]:

In other words, the court made a judgment that the ballot initiative works toward full illegality and would eventually phase out the legal ownership of most rifles as owners part with them via death or because they don’t want them anymore. Essentially, the judges determined that the “person” language limits the ownership of legal rifles to those in possession of them at the time the law would have potentially been passed.

In other other words, the ballot initiative would have prohibited the transfer of any such already-owned rifles from one person to another by inheritance, devise, gift or otherwise. Giving a semi-automatic gun as a birthday present would be off-limits.

Justice Jorge Labarga dissented–saying the language wasn’t misleading whatsoever and castigating the majority for placing overwhelming importance on the summary language because voters have a duty to research potential changes to the law.

“The ballot title clearly communicates the chief purpose of the Initiative, and the ballot summary clearly summarizes the content of the proposed amendment,” Labarga said. “In fact, the language is accurate, and the majority simply concludes that the language is insufficiently narrow.”