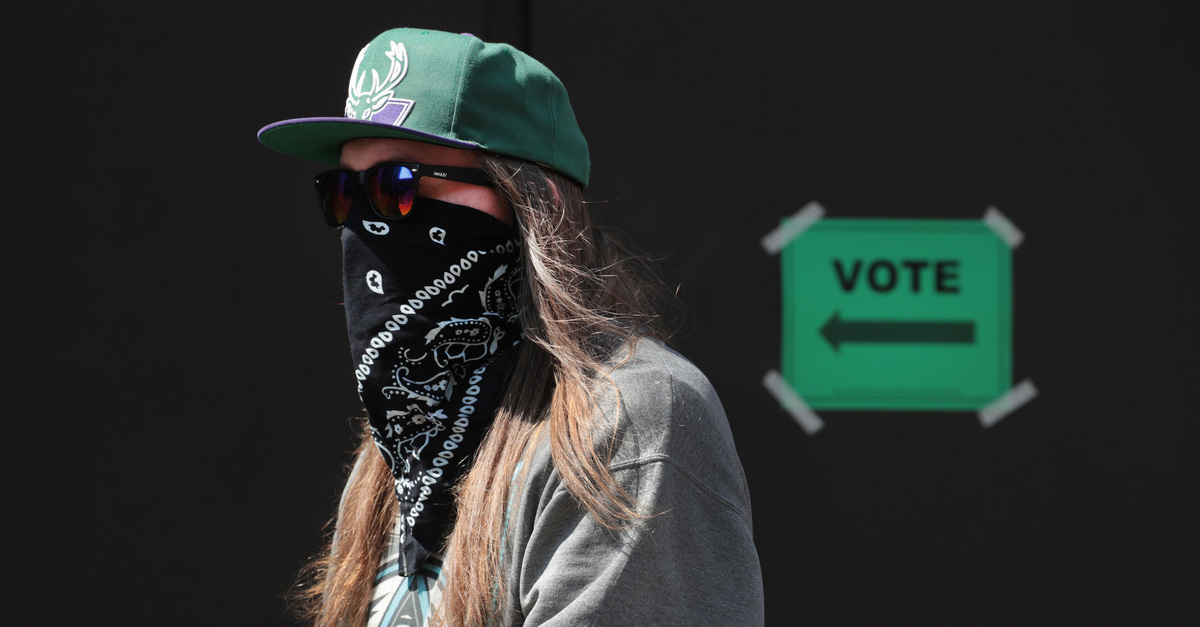 A resident waits in line to vote at a polling place at Riverside University High School on April 07, 2020 in Milwaukee, Wisconsin.

And that’s exactly what happened to the Milwaukee Election Commission over the weekend.

According to the Milwaukee Journal Sentinel, the commission’s meeting was cut short and without warning on Sunday after a videoconference was hacked by someone, or a number of people, who posted “crude pornographic images and racial slurs” as well as videos of roughly the same kind of content.

By virtue of the way the software itself works, those images and videos were immediately broadcast onto the computer screens of every person engaged in the conference call at the time. All in all, that means that some two dozen election commissioners and other public officials in the Brew City were subject to the visual attack.

It’s not immediately clear if the videos had sound.

But the smut-filled efforts reportedly continued on for quite awhile–nearly seven uninterrupted minutes, according to local Fox affiliate WITI. And while no one on the commission is being blamed for Zoom’s alleged security flaws, the warning signs were there.

[F]rom the beginning it appeared the public meeting would get off to an inauspicious start. Before the meeting officially started, a number of users signed in on the conference call had listed names that were a double entendre, in nature.

After the dirty barrage, it was minutes before the commissioners realized their meeting had been taken over by an outside group of online trolls, Milwaukee Election Commission Executive Director Neil V. Albrecht told the outlet.

A “brief conversation” with an individual who said they were a Zoom technician ensued but that discussion apparently went nowhere. Assistant City Attorney Patrick McClain ordered a halt to the proceedings and the meeting was eventually rescheduled.

The purpose of the meeting was to discuss the application of state law to a problem likely plaguing many municipalities across the Badger State: what to do with absentee ballots that don’t fit into the highly stringent guidelines handed down by higher courts.

On the eve of last Tuesday’s primary and general election, the U.S. Supreme Court issued a controversial 5-4 decision–with the conservatives in the majority–which determined that absentee ballots had to be hand-delivered or postmarked by Tuesday in order to count.

The use of absentee balloting increased dramatically in response to the novel Coronavirus (COVID-19) pandemic but state election officials were not prepared for the surge in requests and, for many voters, this was their first time voting by mail.

The mix of novelty and a state bureaucracy half-way working to reconfigure balloting on the fly–with last-minute changes from state authorities and then the Supreme Court–all but ensured variegated confusion and many invalid ballots. And that’s precisely what happened.

According to Albrecht, election officials in Milwaukee received 354 ballots with no postmark whatsoever. Some of them made their way to his office by April 8 or April 9 but others arrived a day or two later than that–casting doubt as to whether the ballots should count.

The video conference attendees had hoped to hash out the details about what to do with those 354 stray postmark orphaned ballots but the Zoom-bombers had other things in mind.

On Sunday evening, the meeting was rescheduled for Monday morning. Zoom was not used during that meeting and no action was taken about the stray 354 ballots.