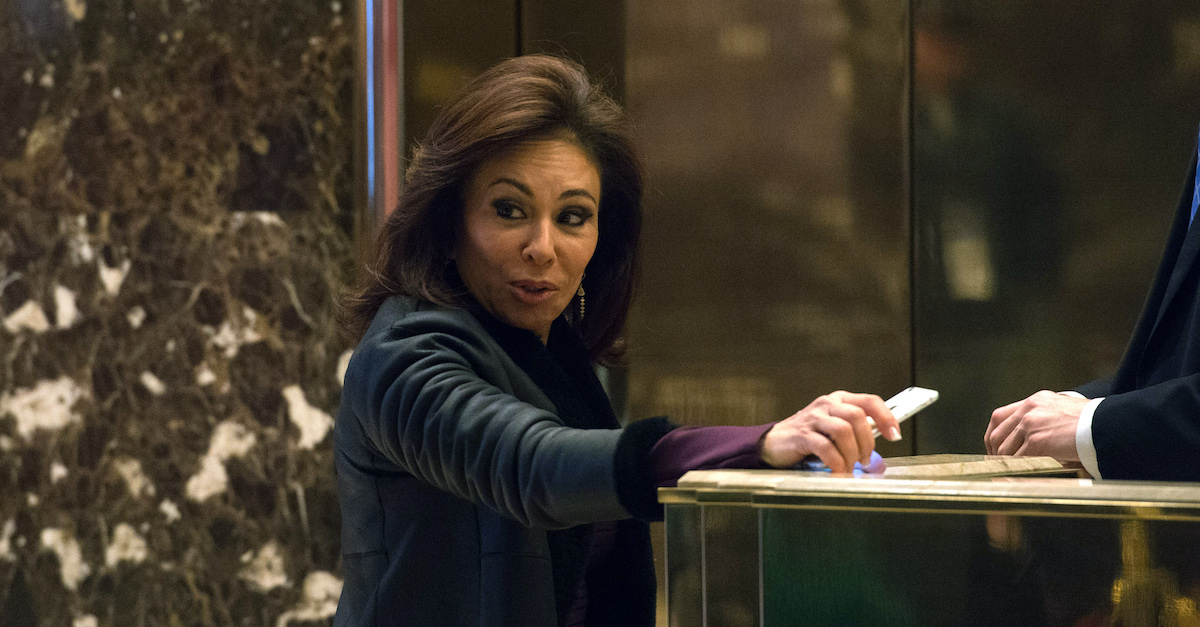 In June, a Delaware judge advanced a $1.6 billion civil defamation lawsuit against Fox Corporation and Fox Broadcasting Company. Pirro is not a defendant in the lawsuit, and though Fox Broadcasting was captioned in one complaint, the judge removed that entity as a defendant.

As first reported by NPR, Dominion claims that they obtained evidence exposing Pirro’s key role in the case through discovery, the evidence-sharing phase of proceedings that began months ago. The company claims that Fox News finally produced some of it at the eleventh hour before Pirro was scheduled to take the hot seat.

“Thirteen hours before her deposition, and several months since first requesting her deposition, Fox News produced several texts from Ms. Pirro,” the partially sealed public version of the filing states, followed by multiple lines of redactions.

Obtained by Law&Crime, the filing indicates that Pirro took her deposition on Aug. 23, but Dominion wants another chance to question her about recently obtained discovery.

“Despite having logged over [REDACTED] emails as protected by the reporter’s privilege, Fox did not withhold or redact these emails,” the company’s lawyer Brian E. Farnan wrote in the motion to compel. “Nor has it asked for them to be snapped back since they were used at the August 23 deposition.”

According to the filing, the messages give context to Pirro’s interview with conspiracy theorist and attorney Sidney Powell on her show on Nov. 14, 2020, in a segment that she promoted on Twitter. The tweet about the interview referred to “intense focus” on “allegations of voter fraud,” without noting that such claims were unsupported. The embedded video of their conversation shows the host gave her and her views a friendly reception.

“It is one huge, huge criminal conspiracy that should be investigated by military intelligence for its national security implications,” Powell asserted.

“Yes,” Pirro affirmatively replied, before casting vague doubt on federal prosecutors. “And hopefully, the Department of Justice, but who knows any more?”

Pirro then wished Powell “good luck” on her “mission,” before giving the lawyer an opportunity to fundraise for her non-profit group Defending the Republic, associated with her so-called “Kraken” litigation.

“She not only allowed Ms. Powell to air such nonsense, not only amplified it on her Justice with Judge Jeanine program,” Dominion’s lawyers reportedly wrote, “[but] Ms. Pirro’s conduct and role in the spread of this disinformation lies at the heart of Dominion’s claims.”

Named after the mythical, octopus-like monster dramatized in the Hollywood blockbuster Clash of the Titans, the “Kraken” also became Powell’s nickname for four lawsuits that she and others filed in Arizona, Georgia, Michigan and Wisconsin. All four actions sought to overturn President Joe Biden’s victories in key battleground states. Federal judges dismissed each in turn, in scathing rulings. A Michigan-based judge judge referred Powell and every other lawyer involved in that case to their respective bar associations for possible discipline or disbarment, calling their lawsuit a “historic and profound abuse of the judicial process.”

But Powell, now fighting for her law license, appeared as a guest on multiple Fox News shows in the wake of the election.

Dominion’s attorneys did not immediately respond to Law&Crime’s emails requesting comment. Neither did a spokesperson for Fox.

In both the Dominion case and litigation filed by Smartmatic — another voting machine company that was the subject of 2020 election conspiracy theories — Fox released nearly identical statements casting the lawsuits as a threat to freedom of the press.

The hefty potential penalties do “nothing more than a flagrant attempt to deter our journalists from doing their jobs,” the company previously told Law&Crime.

According to NPR, Dominion wants to force Fox to turn over the full employment contracts of 13 top network executives, including Fox News Media CEO Suzanne Scott and Fox president and executive editor Jay Wallace. The motion disclosing these names was reportedly filed on the open docket, before being removed from the public record and replaced with a redacted version sealing the names.

The $2.7 billion lawsuit filed by Smartmatic against Fox News in Manhattan Supreme Court casts a wider net that Dominion’s suit. In addition to suing two of Fox’s corporate entities, Smartmatic’s suit names Maria Bartiromo, Lou Dobbs, and Pirro, who was later dismissed as a defendant.