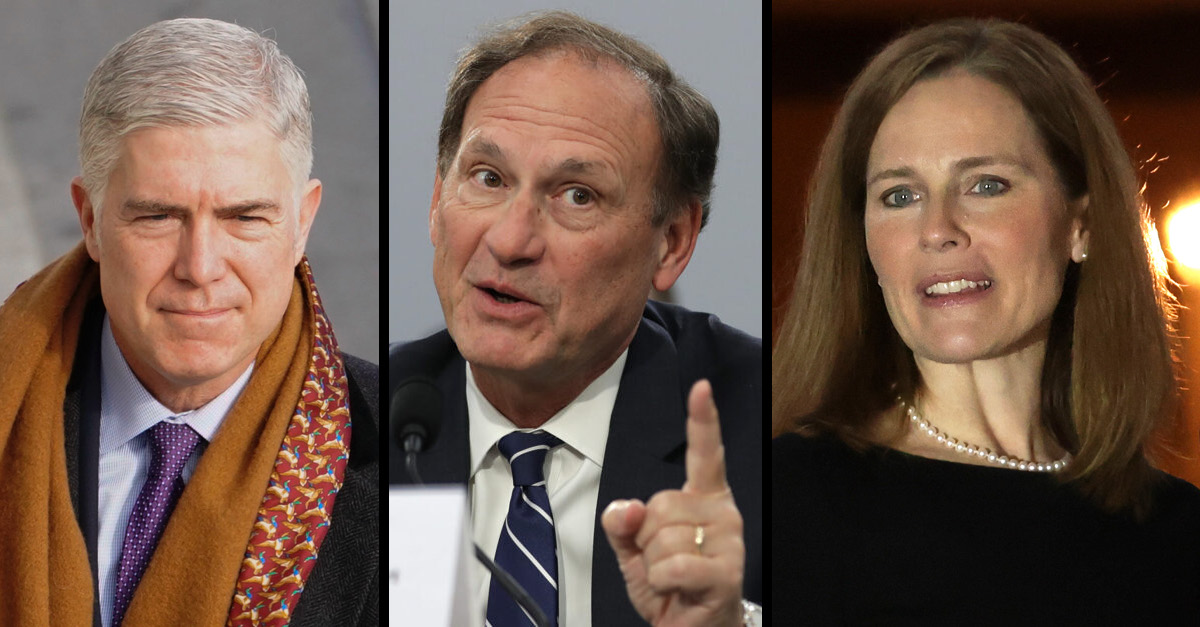 The United States Supreme Court released an opinion from its shadow docket late Friday night which dealt the latest blow to state-imposed COVID-19 restrictions during the global pandemic. As a result, California churches can now open their doors for indoor worship services.

A hotly divided (and utterly predictable) 5-4 decision stated that worship services can resume, but California’s ban on singing and chanting and its 25% attendance limit may stay in place for the immediate future.

Two Southern California churches with multiple locations, South Bay United Pentecostal Church and Harvest Rock Church, raised the challenge.  They argued that that the Golden State’s restrictions were unconstitutional given that some secular businesses were permitted to stay open.  The churches argued that the Supreme Court’s November decision in Roman Catholic Diocese of Brooklyn v. Cuomo constituted a “seismic shift” in COVID-19 jurisprudence which warranted a concomitant change in California’s regulations.

This latest Friday-night ruling showcased the justices’ differing ideologies on the topic of religious freedom. Justices Clarence Thomas and Neil Gorsuch were clear that they preferred lifting all restrictions imposed on churches.

In a statement that was joined by Justices Thomas and Samuel Alito, Gorsuch characterized the case as one in which California clearly singled out religious exercise in its COVID-19 regulations. Calling into question what they called California’s contention that it “can thread the needle” by prohibiting what is especially dangerous about religious worship services, the pair of justices suggested that California’s regulations had gone too far.

Not all church services involve large groups of people sitting in close proximity, nor do they all involve singing. Further, they argued, similar limitations are not placed on secular activities. Raising what the Court considered to be relevant examples, the justice wrote, “Yet, California is not as concerned with the close physical proximity of hairstylists or manicurists to their customers,” and, “no one is barred from lingering in shopping malls, salons, or bus terminals.”

“If I have a quibble with the Court’s order, it is with how it addresses California’s final factor, singing,” Gorsuch wrote. That “quibble,” though, was to be short-lived.  Just a few lines later, the justice explained, “on further inspection, the singing ban may not be what it first appears.”

Gorsuch then slammed California for acquiescing to the demands of Hollywood: “It seems California’s powerful entertainment industry has won an exemption. So, once more, we appear to have a State playing favorites during a pandemic, expending considerable effort to protect lucrative industries (casinos in Nevada; movie studios in California) while denying similar largesse to its faithful.”

Justice Samuel Alito joined the statement, but clarified that he would rule to give California the chance to demonstrate that its COVID-19 restrictions capacity limits and singing/chanting bans are necessary to thwart the pandemic.

Justice Amy Coney Barrett issued her first words as a SCOTUS justice in a brief opinion that was joined by Justice Brett Kavanaugh. In a single-paragraph opinion, Barrett said she disagreed with Gorsuch’s statement on one point: the singing and chanting.  The churches should have provided information as to whether the ban against singing and chanting was specific to them, or was applicable to secular institutions as well.

“Of course,” Barrett wrote, “if a chorister can sing in a Hollywood studio but not in her church, California’s regulations cannot be viewed as neutral. But the record is uncertain, and the decisions below unfortunately shed little light on the issue.”

Chief Justice John Roberts also wrote an opinion which raised a view (one that we’ve seen before in SCOTUS COVID-19 cases) that federal courts should sometimes take a back seat to the judgment of elected officials and public health experts. On the issue of singing indoors, Roberts said that because California concluded it poses a heightened risk, he sees “no basis in this record for overriding” that finding.

However, on the issue of total prohibition of worship services — which Roberts said “appears to reflect not expertise or discretion, but instead insufficient appreciation or consideration of the interests at stake” — he held differently. The judiciary has a role in safeguarding individual rights, he explained. “Deference, though broad, has its limits,” wrote the Chief Justice.

Justice Elena Kagan penned a dissent, joined once again by Justices Stephen Breyer and Sonia Sotomayor. Kagan began the dissent with a rebuke of her fellow members of the bench:  “Justices of this Court are not scientists. Nor do we know much about public health policy,” she wrote.  “Yet today the Court displaces the judgments of experts about how to respond to a raging pandemic.”

Reducing the Court’s ruling to one that demands that California “must instead treat worship services like secular activities that pose a much lesser danger,” Kagan slammed the ruling that “defies our caselaw, exceeds our judicial role, and risks worsening the pandemic.”

Noting that the First Amendment does not require distinct activities be treated the same way, Kagan looked at the case through a practical eye. “Given California’s mild climate,” she wrote, the state’s COVID-19 restriction “does not amount to a ban on the activity.” Other gatherings have taken place outdoors, and so too can church services. Furthermore, shoppers are not in close proximity with one another for as long as are religious congregants, and if we’re talking about Hollywood, there are specific safety procedures in place rendering the comparison a poor analogy. “Film production studios in California,” Kagan wrote, “must test their employees as many as three times a week—a requirement that ‘could not feasibly be applied to the congregation of a house of worship.'”

Kagan continued to say the Court’s error in judgment “is no garden-variety legal error.” Rather, it cripples California’s ability to address a public health emergency by forcing it to ignore science—all without doing any independent scientific research beyond simply reading legal briefs.  “In the worst public health crisis in a century,” wrote Kagan, “this foray into armchair epidemiology cannot end well.”