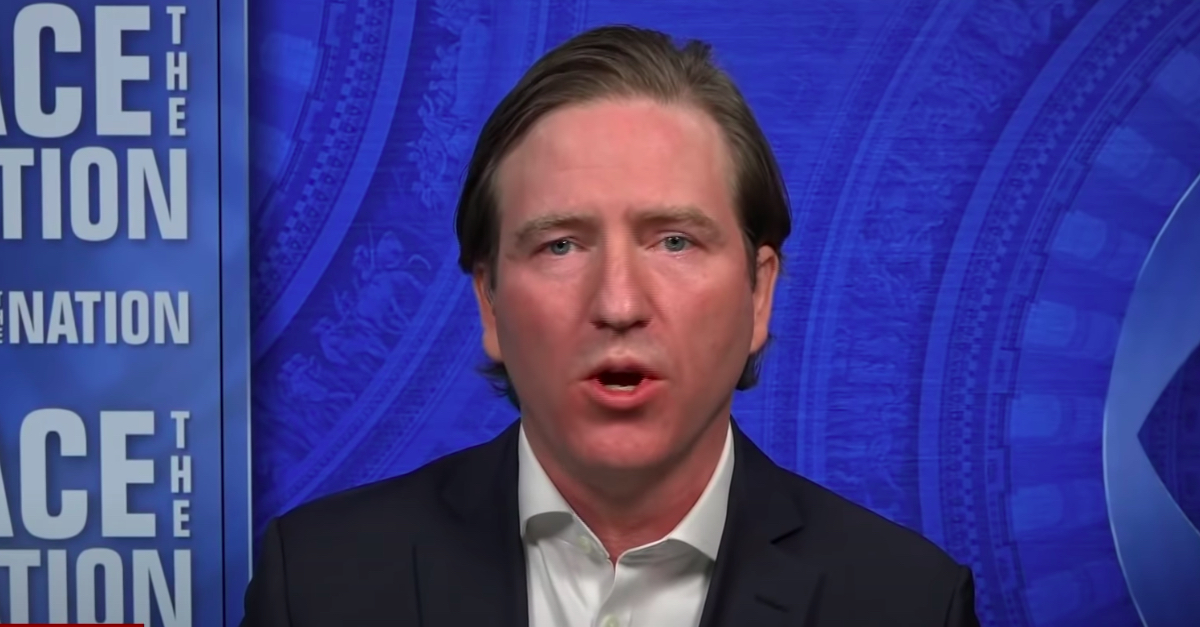 Former head of the U.S. government’s cybersecurity agency Chris Krebs filed a lawsuit on Tuesday against the Trump campaign and Trump campaign lawyer Joe diGenova, accusing them of defamation and intentional infliction of emotional distress as part of a “calculated and pernicious conspiracy” to harm President Donald Trump’s enemies.

The lawsuit stems from comments diGenova, a former U.S. Attorney, made roughly a week ago during an appearance on the right-wing network Newsmax. The network is also named as a defendant in the suit.

After being introduced as a member of President Trump’s legal team, diGenova said that Krebs—who was fired last month for saying the 2020 election was the “most secure in American history” —should be “taken out at dawn and shot.”

“Anybody who thinks the election went well, like that idiot Krebs who used to be the head of cybersecurity. That guy is a class A moron. He should be drawn and quartered. Taken out at dawn and shot,” diGenova said.

DiGenova later claimed he was joking, but Krebs said the Newsmax interview immediately placed him in the crosshairs of the president’s most hardcore supporters.

“Defendant diGenova’s call to execute Plaintiff was received, as Defendant diGenova intended, by numerous angry Newsmax viewers as confirmation that Plaintiff was one of the ‘traitors’ who was stealing the election from President Trump,” the suit stated. “An angry mob immediately bombarded Plaintiff with a barrage of death threats and harassment, which continue to this day. The Defendants’ threats have upended Plaintiff’s life, as well as his family’s security, and caused serious fear, distress, suffering, and even physical damage.”

The complaint recounted how Krebs and his wife, who have already been forced to relocate with their five children, were approached by their 10-year-old who asked if “Daddy’s going to be executed?”

Krebs, a lifelong Republican, is seeking to have the court order the defendants to pay monetary damages and require Newsmax to remove the video of diGenova’s interview from its archives.

The filed complaint also alleges that Krebs was not the only victim of the campaign’s vicious attacks against those inside the GOP perceived to be working against the president by contradicting false claims that Trump was somehow the true winner of the 2020 election.

“After the results of the election became clear, the Defendant Campaign and its emissaries and agents, including Defendant diGenova, spread, stoked, and instigated unfounded allegations of system-wide voter fraud, abuse, and interference—without proffering any evidence deemed credible by any state or federal court—in a naked and politically motivated effort to undermine public confidence in the election,” the lawsuit stated.

According to the lawsuit, the effort was intended to encourage “unlawful threats and actual violence” upon anyone willing to speak truth in the face of the campaigns falsehoods.

“[T]his objective—retaliating against Republicans who publicly rejected the “rigged election” narrative—was, upon information and belief, a central element of the Defendants’ conspiracy to use unlawful means to: (a) deter other Republicans from diverging from the Defendant Campaign’s desired narrative; (b) discredit and intimidate public servants, including Plaintiff, who are potential witnesses in ongoing litigation, who have critical information concerning the integrity of the 2020 election; and (c) fraudulently entice the Defendant Campaign’s supporters to donate money for its future political activities,” the suit stated.

In a brief interview with the New York Times, Krebs said he filed the lawsuit to encourage other Republicans not to be “intimidated into silence.”

“We need to make it clear that these behaviors are not acceptable in a civil society,” he added.

Krebs Complaint by Law&Crime on Scribd