Arizona Secretary of State Says She and Family Have Received Violent Threats, Points a Finger at President Trump 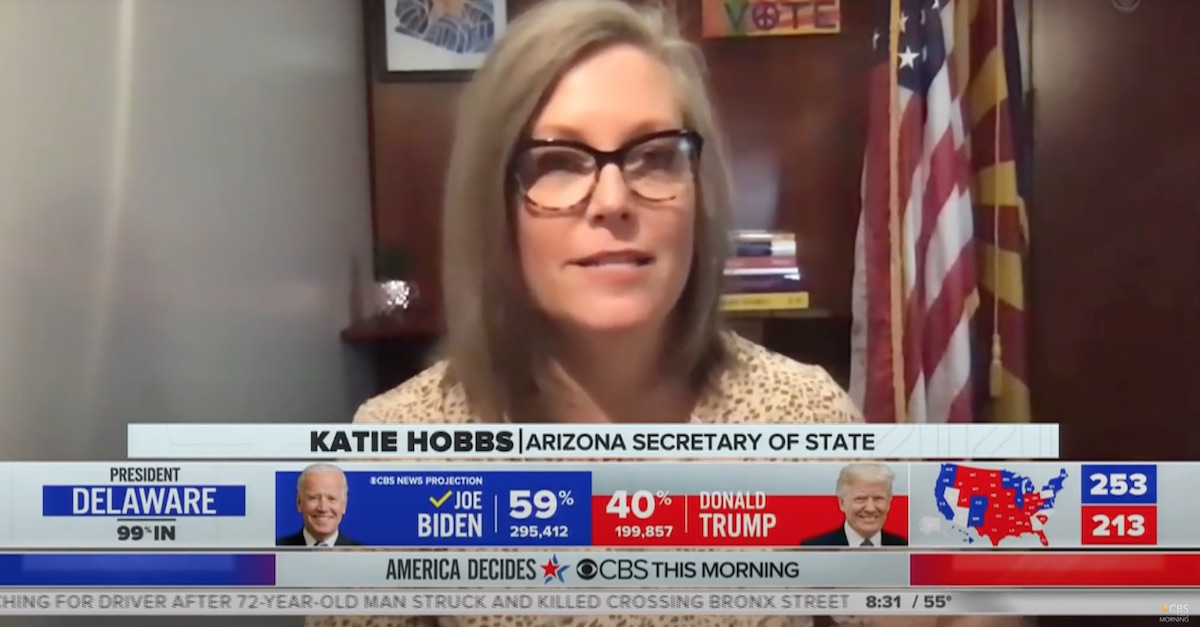 Arizona’s Secretary of State blamed the violent threats she and her family have received on President Donald Trump’s misinformation campaign regarding the 2020 election results. Secretary Katie Hobbs, a Democrat, said in a statement Wednesday that the president and his allies in the Republican Party have “encouraged” and stoked distrust in the election outcome.

“Their words and actions have consequences,” Hobbs said, linking the threats against her, her family, and her office to widespread misinformation. The threats were described as “ongoing and escalating.”

“Sharpiegate” or “Penghazi,” as some have called it online, is one example of a debunked conspiracy theory particular to Arizona. Officials in the state, whether Hobbs or Republican Attorney General Mark Brnovich, have rejected allegations of widespread fraud as having no basis in fact.

Arizona Secretary of State Katie Hobbs released this statement in response to ongoing and escalating threats of violence directed at her family and her office. pic.twitter.com/SzsRxzvOl1

“The truth is, I was prepared for these threats of violence and vitriol. I have been a social worker for many years and can anticipate this reaction when certain people feel powerless and angry,” Hobbs’s statement began. “These actions are utterly abhorrent, especially when directed at my family and my staff. They are a symptom of a deeper problem in our state and country—the consistent and systematic undermining of trust in each other and our democratic processes.”

Hobbs then noted that the “president, members of Congress, and other elected officials […] are perpetuating misinformation and are encouraging others to distrust the election results in a manner that violates the oath of office they took.”

“It is well past time that they stop,” Hobbs continued.” Their words and actions have consequences.”

The Arizona Secretary of State called on Republican Arizona Gov. Doug Ducey and other elected officials in the state to “stand up for the truth.”

12 News, an NBC affiliate, reported early Wednesday that Arizona law enforcement is investigating a death threat made against Hobbs on Parler.

Hobbs said she was doxed on Parler. Her son’s cell phone number and the family’s address was posted on the social networking site, she said.

“The threat was something like, ‘Let’s burn her house down and kill her and her family, and teach these fraudsters a lesson,’” Hobbs told 12 News.

President-elect Joe Biden won the Grand Canyon State by around 11,000 votes; Trump defeated Hillary Clinton by around 90,000 votes in 2016. The Trump campaign’s lawsuit in Arizona, which did not allege fraud, fell flat.

A New York man who had allegedly parroted the president’s baseless “stolen” election rhetoric was recently arrested. Brian Maiorana was accused of threatening Senate Minority Leader Chuck Schumer (D-N.Y.) and others online because he was angry about the election results.

“The Department of Justice will not stand idly by when people like the defendant allegedly threaten to kill elected officials, lawful protesters and law enforcement simply because of animus towards the outcome of an election,” the Eastern District of New York’s Acting U.S. Attorney Seth DuCharme said in a statement. “Americans have a constitutional right to voice their opinions, but this office will not tolerate violence or threats of violence used to intimidate others with whom they disagree.”