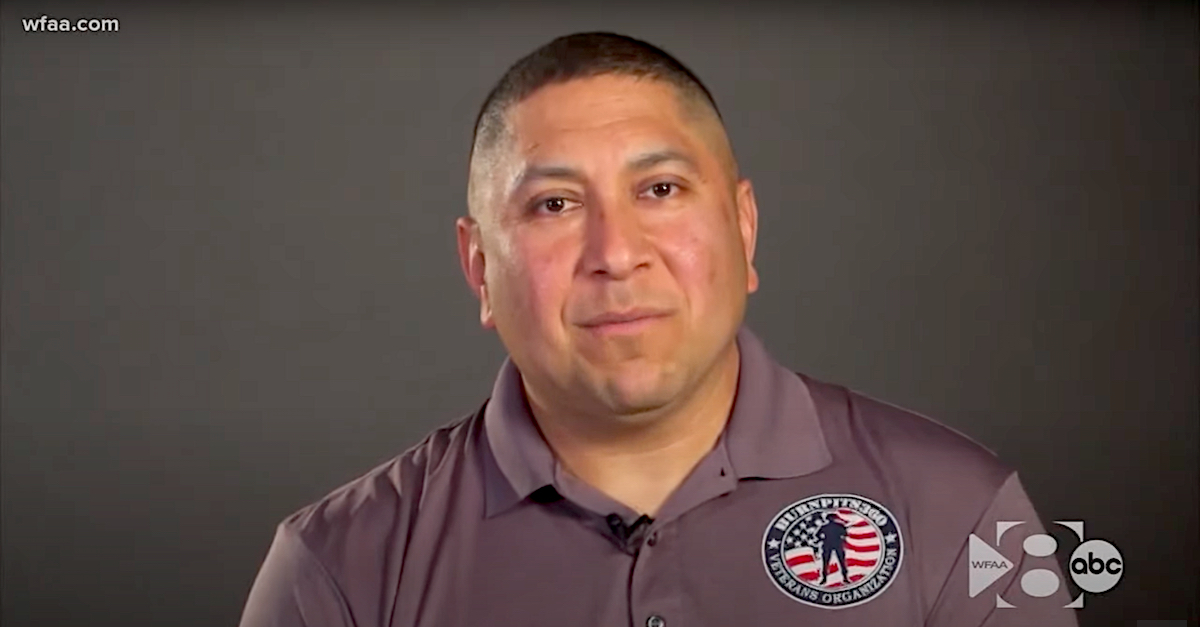 Le Roy Torres appears in a screengrab from a WFAA-TV interview.

The Supreme Court of the United States on Wednesday agreed to hear the case of an Army reservist who says he was forced to resign from his job as a state trooper due to lung damage sustained from “burn pits” near a military base where he once was stationed in Iraq. The case is stylized as Torres v. Texas Department of Public Safety, and it raises the legal question of whether Texas is immune from Torres’s lawsuit based on “sovereign immunity.”

Le Roy Torres was a state trooper with the Texas Department of Public Safety (TDPS). He had been a member of the U.S. Army Reserves for 18 years when he was called to active duty and deployed to Iraq in 2007.  There, he was exposed to toxic waste. According to Torres’ petition to the SCOTUS:

While deployed, Petitioner, like thousands of fellow soldiers serving in Iraq, suffered lung damage after being exposed to toxic fumes emanating from the now-infamous “burn pits.” These huge open-air pits smoldered 24 hours a day on many military bases, spouting thick, black smoke as they burned everything from trash, to ammunition, to medicine, to human waste.

A year after Torres’ deployment, he was honorably discharged from the Army and sought to resume his work with TDPS. However, Torres had developed constrictive bronchiolitis — which, according to his petition, is “a devastating respiratory condition that causes narrowing of the airways and difficulty breathing.” Torres was unable to continue working as a state trooper and requested reassignment within TDPS.

His request was refused, and Torres was given a choice: report for duty as a state trooper or be fired. Torres chose to resign. He has since co-founded the nonprofit organization Burn Pits 360 with his wife Rosie Lopez-Torres; the group advocates for service members injured by toxic burn pits.

After Torres was forced to resign, he sued TDPS in state court for discrimination based on his military service and asked for more than $5 million in damages. Torres’s claim was based on the federal Uniformed Services Employment and Reemployment Rights Act (USERRA), which makes it illegal for employers to discriminate on the basis of military service.

USERRA has been on the books since 1994, when it was signed into law by President Bill Clinton in the wake of the Persian Gulf War. USERRA’s sponsor, then-Senator Jay Rockefeller (D), said the law was enacted “to compensate for the disruption of careers and the financial setback that military service meant for many veterans.”

In state court, TDPS argued that it had sovereign immunity from Torres’s lawsuit and moved to dismiss the case. After a hearing, the trial court sided with Torres. On appeal, though, TDPS prevailed. A state appellate court dismissed the lawsuit by holding that USERRA could not constitutionally authorize lawsuits against states. The appellate court said Congress lacked any power to abrogate state sovereign immunity pursuant to its War Powers.  The Supreme Court of Texas refused to intervene, leaving the appellate court’s dismissal in place.

Torres next appealed to the United States Supreme Court, which will now consider the limits of sovereign immunity in such matters. In his petition to SCOTUS, Torres argues that unless the justices step in to overturn the Texas court’s dismissal, “USERRA’s protections will die
by a thousand cuts” and that servicemembers who work for state governments will suffer, uncertain whether they can rely on USERRA’s protections.”

By contrast, Texas argues that the justices should not use the Torres case as a vehicle to subject non-consenting states to private lawsuits. From the state’s reply brief to SCOTUS:

The Biden administration also weighed in on the case by urging the justices not to hear the case.  The federal government argued that USERRA is constitutional — but also that USERRA plaintiffs like Torres “retain other mechanisms to obtain relief against state employers.”

No argument date has yet been set for the case. However, the case has already attracted significant media attention. Le Roy and Rosie Torres appeared on the pilot of Jon Stewart‘s show “The Problem With Jon Stewart” in an episode dedicated entirely to discussion of the horrific health effects and deeply troubling lack of government response to servicemembers’ injuries caused by burn pits. On the episode, Torres described the federal government’s attitude toward himself and other servicemembers wounded by burn pits as one of “delay, deny, hope you die.”

Brian J. Lawler, an attorney for Torres, provided the following statement to Law&Crime Wednesday via email:

We are thrilled that the Supreme Court has taken up this important issue, which is vital to protecting those who serve this country in the military from discrimination upon their return to civilian employment. State employers cannot be immune from discriminatory conduct against our servicemen and women, and this is the next step to ensuring they are held to the same standard as other employers.

Counsel for the State of Texas did not immediately respond to request for comment by Law&Crime.

Watch WFAA’s interview with Torres below:

Editor’s note: This piece was updated from its original version to include comment from counsel.