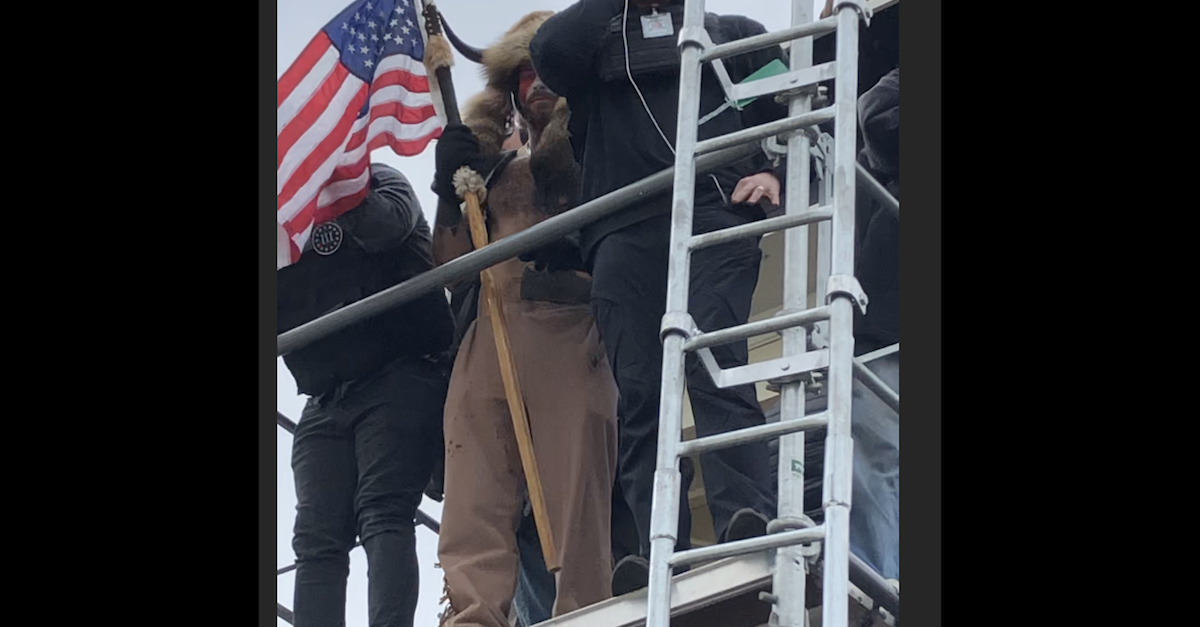 When deciding to keep Jacob Chansley behind bars pending trial, a federal judge wrote that the rioter who became known as the “QAnon Shaman” had “blatantly lied” in his 60 Minutes+ interview by claiming that authorities left the door open for the pro-Trump mob to enter. The court just released two videos debunking Chansley’s claim.

The two compelling videos document the chaos on the scene as rioters smashed through the windows of the U.S. Capitol building.

“Not only is defendant unable to offer evidence substantiating his claim that he was waved into the Capitol, but evidence submitted by the government proves this claim false. A video submitted by the government captures rioters breaking through the windows of the Capitol building,” Lamberth wrote in a scathing 32-page opinion on March 8. “At the same moment that rioters smash the glass and crawl through the windows, the video pans over to show a large group of rioters walking through an adjacent doorway into the Capitol building. Included in that group is defendant, who is easily identifiable by his horned headdress.”

The judge noted that was not the image that Chansley and his mother presented to 60 Minutes+.

“The government’s video shows that defendant blatantly lied during his interview with 60 Minutes+ when he said that police officers waved him into the building,” Lamberth added. “Further, this video confirms that defendant did not, as defense counsel claims, enter the building” contemporaneously with the exiting by Capitol Police.” […] Nor did he enter, as defense counsel represents, in the ‘third wave’ of the breach. To the contrary, he quite literally spearheaded it.”

The network also interviewed Martha Chansley, the accused rioter’s mother, whose dubious remarks that her son “walked through open doors” and was “escorted into the Senate” did her son no favors.

“The Court is not persuaded that defendant’s mother will ensure his compliance with any conditions of release imposed, and defendant identifies no other custodian,” Lamberth wrote.

Experts on shamanism likewise have found Chansley’s claims to the faith questionable.

“Jacob Chansley’s shamanism bears scant resemblance to the real thing, although he gets high sartorial marks for headgear and ink,” Professor Michael F. Brown, the president of the Santa Fe-based School for Advanced Research and author of The Channeling Zone: American Spirituality in an Anxious Age, told Law&Crime. “Traditional shamans consume organic foods largely because that’s all they have access to. Some take hallucinogens as part of their practice, while others don’t. But traditional shamanism is closely connected to specific communities and their cultural understandings, which hardly seems to be the case for him.”

The judge characterized the TV interview as little more than a “media publicity stunt” for Chansley’s lawyer Albert Watkins.

“Such media appearances are undoubtedly conducive to defense counsel’s fame. But they are not at all conducive to an argument that the only way defense counsel could privately communicate with his client is if defendant were temporarily released,” Lamberth wrote. “Given defense counsel’s decision to use what could have been a confidential videoconference on a media publicity stunt, that argument is so frivolous as to insult the court’s intelligence.”

Following the court’s release of the interview, Watkins claimed that the footage had “irregularities” that his team wanted to investigate.

“Subsequent scrutiny of the video footage (including the The New Yorker video specifically cited by the Government) has given rise to the identification of numerous ambiguities, irregularities, inconsistencies, timeline issues and concern about the assertions of the Government about the actions of Mr. Chansley based on the Government’s video footage,” Watkins said in a statement, insisting that forensic examination would help “garner a heightened degree of appreciation for the peaceful and non-violent nature of the Shaman and that which really occurred on January 6.”

Prosecutors call Chansley a “leader” of QAnon, but Watkins vigorously denied that in an interview for Law&Crime’s podcast “Objections,” making an offer about what he would do about the government memo claiming that.

“Do me a huge favor and scan that, and send it to me I’ll be the first one to shove it right up my rectum,” Watkins said in the video interview. “I’ll do it on public TV.”

Chansley defense team set up a Gmail address, depicting their client as a “Shaman,” and requesting the public send them videos.

Listen to that podcast below:

Update—March 16 at 11:53 a.m. Central Time: This story has been updated to include a statement by Chansley’s defense team.