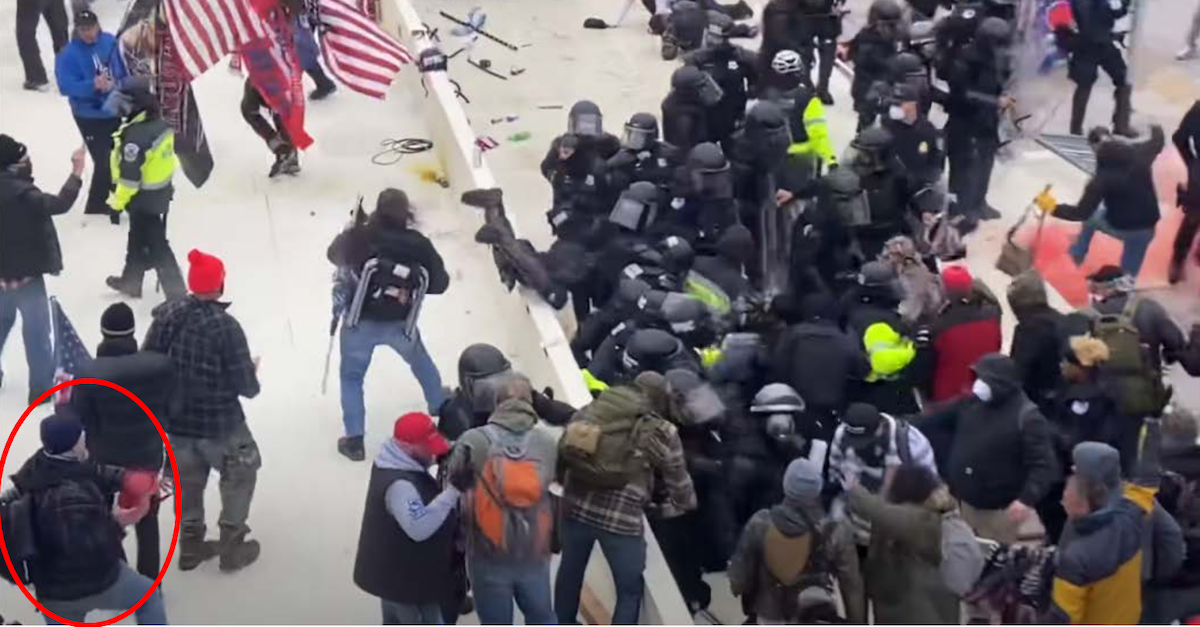 This photograph from the government’s statement of facts against retired firefighter Robert Sanford circles the accused holding an extinguisher, which authorities claim he used to assault three Capitol Police officers.

Instead of fighting the conflagration of documented Donald Trump supporters who stormed the U.S. Capitol, a retired firefighter allegedly fed the flames of insurrection with a tool of his former trade.

Federal prosecutors have charged Robert Sanford, a 55-year-old from Pennsylvania, with four federal crimes, including allegations that he assaulted three Capitol Police officers by hitting them in the head with a fire extinguisher.

Sanford can be seen in photographs wearing a “CFD” hat, referring to the Keystone State’s Chester Fire Department.

Prosecutors credit Sanford’s detection in part based on a tip to the FBI two days ago, from someone who told authorities Sanford confessed that he was the person the Bureau was looking for.

Authorities also matched the suspect to the alleged offenses through two videos of the riots linked in footnotes to court papers, which screenshots one of them to show what appears to be Sanford holding the fire extinguisher. YouTube slapped content warnings with age restrictions for the disturbing footage, showing the pro-Trump mob attacking and taunting police officers.

According to the tipster, Sanford traveled to Washington, D.C. by bus in order to listen to Trump’s speech and then “followed the President’s instructions and [went] to the Capitol.”

Officer William Young was one of the Capitol Police on the scene who “felt a hard strike to the back of his helmet,” authorities say.

“When he turned to see where the blow had originated, Officer Young saw a fire extinguisher on the ground but could not determine who had struck him,” according to the statement of facts. “Officer Young was subsequently evaluated at a hospital and cleared to return to duty.”

The other two officers are not named in court papers.

The Chester Fire Department did not immediately respond to a voicemail requesting comment.

Read the statement of facts against Robert Sanford below:

[Photo courtesy of the U.S. Department of Justice]