School Therapist, Who Resigned to ‘Expose’ Pedophilia in Government, is Charged in D.C. Insurrection 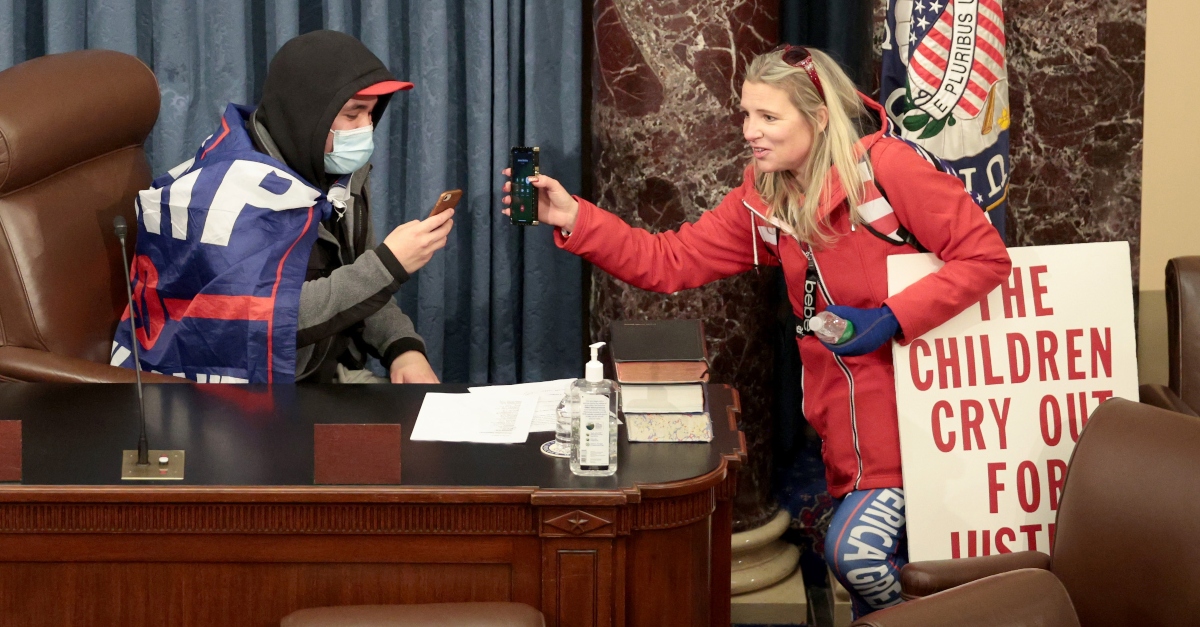 A former school occupational therapist has been arrested for her alleged part in the D.C. insurrection. Federal authorities say Christine Priola, 49, of Willoughby, Ohio, appears in the picture above holding a sign reading, “the children cry out for justice.” She was with another rioter in the Senate chamber and appears to be wearing “Make America Great Again” pants.

Priola is among the dozens of Trump supporters currently charged with raiding the capitol building after President Donald Trump continued to lie that he actually won the 2020 presidential election and that it was being stolen from him.

The Federal Bureau of Investigation said pictures such as the one above helped them identify Priola. A tipster told federal agents that it was her.

Priola quickly fell under scrutiny after the deadly Jan. 6th protests. Local outlet WKYC found the Federal Bureau of Investigation searching her home and detailed activities there in a Friday report.

The FBI noted that agents found clothes, a sign, and other materials consistent with those seen in pictures from the capitol said to be of Priola. Her cell phone data also put her at the area of the Capitol Building, but it appears she may have tried to scrub her phone.  Data was missing from between the dates of Jan. 4 and Jan. 7, according to charging documents.

Priola resigned from the Cleveland Metropolitan School District in a letter dated Thursday. She refused to take the COVID-19 vaccine to return to in-person learning, announced plans to switch “paths to expose the global evil of human trafficking and pedophilia, including in our government and children’s services agencies,” and that she did not want her union dues to “help fund people and groups that support the killing of unborn children,” according to documents obtained by WKYC.

The resignation letter and the sign Priola is accused of brandishing in the legislative chamber both evoke the QAnon conspiracy theory. Supporters of the baseless idea assert that Trump is in conflict with the “deep state” run by Satanist pedophiles. However, charging documents in Priola’s case do not say whether or not she espoused the theory.