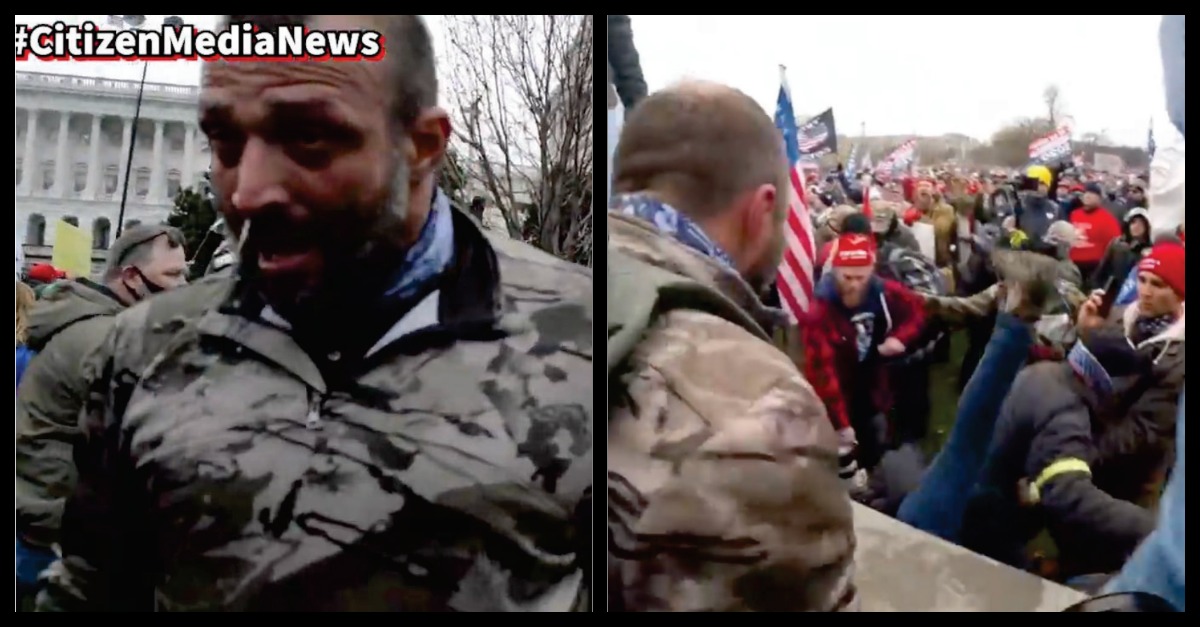 An Oklahoma man has been arrested for allegedly attacking the media during the Jan. 6 pro-Trump riot at the U.S. Capitol Complex. Benjamen Scott Burlew, 41, stands accused of assault in a special territorial jurisdiction and physical violence on restricted grounds.

According to charging documents filed in the U.S. District Court for the District of Columbia, “two videos from separate sources taken during the riots” show the defendant attacking an Associated Press photographer.

“This assault included physically grabbing and shoving the [member of the news media] victim and pushing him forcefully over a low wall,” the court papers allege. “These crimes occurred in the general area of the Lower West Terrace of the U.S. Capitol Building.”

According to the FBI, the photographer was wearing a lanyard identifying him as a journalist and “was carrying at least one camera” while standing on a wide set of stairs when he was “was pulled backwards down the stairs by at least two unknown” assailants.

In video cited by the government, the photographer puts his hands up and backs away from his attackers–only to eventually find Burlew allegedly waiting for him.

The defendant “appears to yell” at the photographer “and approach him aggressively,” according to the government. The first unknown assailant can then be seen grabbing the photographer’s lanyard and then using it “to forcefully drag” the journalist back down the stairs.

The photographer is then pushed, shoved and dragged “parallel to the stairs,” the unnamed FBI special agent notes.

For a few moments, the photographer is then repeatedly pushed and shoved by two additional unknown assailants and yelled at by another. Eventually, the government alleges, Burlew makes his way back to the scene of the ongoing pummeling of the photographer.

According to the FBI, multiple videos–including police body camera footage–corroborate the allegations against the Sooner Stater.

Burlew, for his part, denied to the FBI that he was in Washington, D.C. on Jan. 6 during a brief phone interview where he said the law enforcement agency was lying after invoking his right to an attorney.

The defendant’s identity was confirmed, the government alleges, by four confidential witnesses–including a member of Burlew’s family.

Since then, the FBI claims, eight more people have come forward to identify Burlew based on a federal “Be On the Look Out” poster.

According to the U.S. Department of Justice, “Burlew is one of eight individuals in this investigation who have been arrested for allegedly destroying media equipment, assaulting journalists or inciting violence against members of news media.”