New Hampshire Man Who Drank Wine Inside Capitol on Jan. 6 Is Hoping His Arrest Will ‘Help’ Him Win Congressional Seat 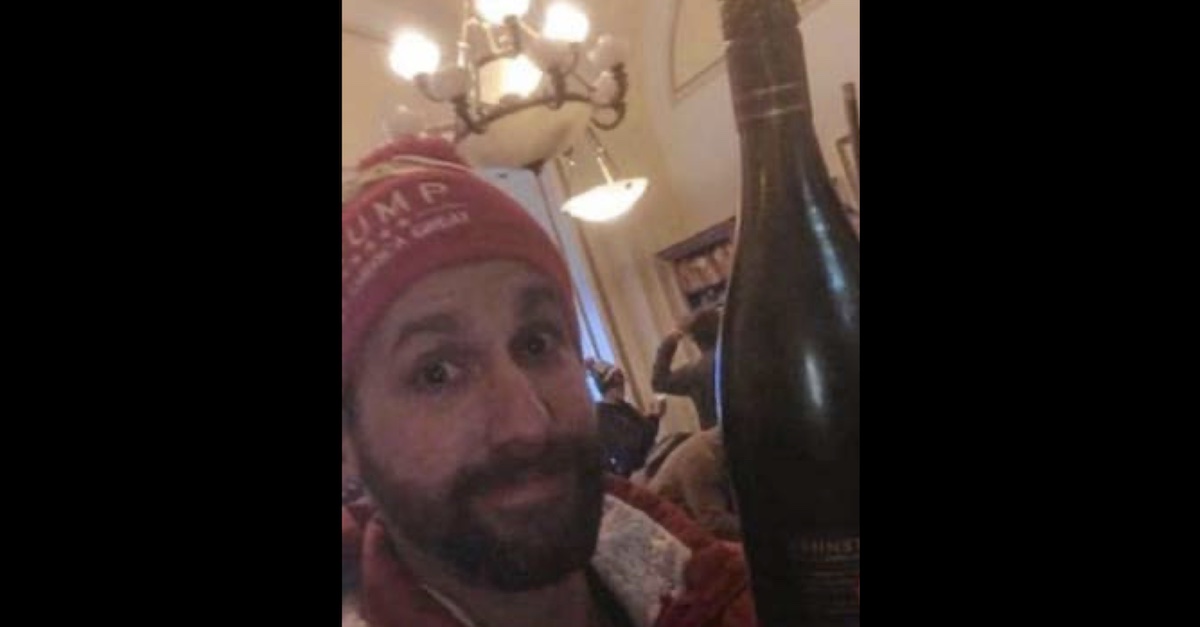 A New Hampshire man facing federal charges for his alleged role in the Jan. 6 siege on the U.S. Capitol announced that he is hoping to return to the nation’s capital in the near future, this time as a member of Congress.

Accused Capitol rioter Jason Riddle, 32, on Sunday told NBC10 Boston that he was running to serve as the House representative for New Hampshire’s Second Congressional District. He would be running to unseat Democratic incumbent Ann L. McLane Kuster who has represented the district since 2013.

Asked about the particulars of his nascent congressional campaign, Riddle told the outlet that he hadn’t nailed down a lot of the details, but said his campaign slogan was going to be something like, “Let’s get back to work.”

A staunch supporter of former President Donald Trump (see the picture above), Riddle said he’s gotten a mix of death threats and fan mail since his arrest for participating in the Capitol riot, but concluded that his actions on Jan. 6 will ultimately assist, rather than hinder, his candidacy for office.

“In the long run, if you’re running for office, any attention is good attention, so I think it will help me,” Riddle said of his arrest. “It tells them I show up,” he said, adding, “I’m going to actually keep my promises and make some changes.”

The FBI arrested Riddle in February after he appeared on NBC10 for a televised interview where he described what he observed inside the Capitol on Jan. 6, as well as his own conduct.

“They were smashing computers, and printers, and breaking things, and throwing papers and lamps around,” Riddle said of those inside the Capitol Building. He also told the reporter that he went inside because he “just had to see it,” and said he had “no regrets.”

According to the charging documents filed in the U.S. District Court in D.C., Riddle in February sat down for an interview with FBI agents, telling them that he remembered walking into the office of a member of Congress where he “found an open bottle of wine on or in a refrigerator and poured himself a glass.”

“RIDDLE admitted he also took a book from the office where he drank the wine. RIDDLE explained he took the book from a desk, believed it was titled something to the effect of ‘Senate Chambers’ and described it as old looking, bound in reddish-brown leather, and it was ‘like a dictionary,’” according to the charging documents. “RIDDLE stated that, shortly after he exited the Capitol, he sold the book to an unknown male individual for $40. RIDDLE also admitted that he stole a small Fox News football from the same office, but tossed it aside as he exited the Capitol building.”

Riddle, who continued to falsely maintain that the 2020 election was stolen from Trump during the interview, also said he wasn’t worried about the fact that he was legally prohibited from entering the District of Columbia—where Congress meets—while his charges are pending.

“Despite my ongoing legal problems, I’m supposed to live my life the way I want, and I want to do this, so why not?” he told the outlet.

Riddle previously told local news outlet The Sentinel Source in January that he was planning to run for Cheshire County Commissioner.