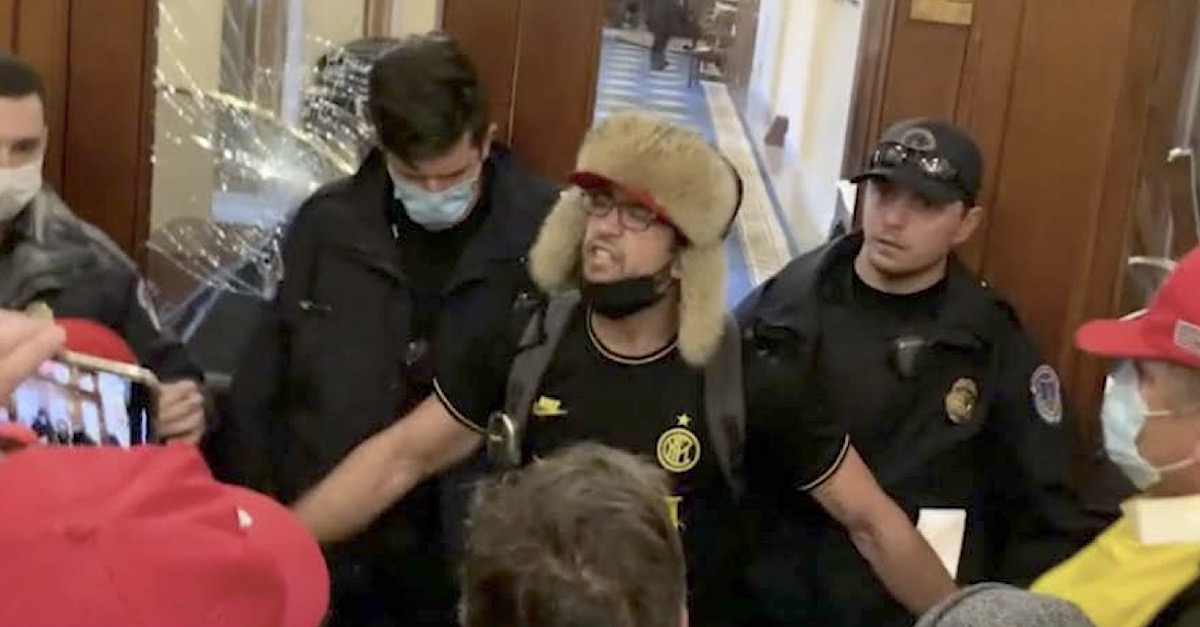 Zachary Alam (center, fur-lined hat) appears near where Ashli Babbitt was shot in an image taken from an FBI affidavit.

A defendant charged in connection with the Jan. 6 breach of the U.S. Capitol Complex repeatedly butted into a proceeding on Wednesday to attempt to file a motion of his own — much to the apparent concern of the judge and his own attorney.

Zachary Jordan Alam is charged with smashing windows in the Speaker’s Lobby moments before Ashli Babbitt was shot and killed by Lt. Michael Byrd. Alam was originally charged with several crimes: (1) assault on a federal officer with a dangerous or deadly weapon; (2) destruction of government property valued at more than $1,000; (3) obstruction of an official proceeding; (4) unlawful entry on restricted buildings or grounds; and (5) violent entry and disorderly conduct.  However, that list was expanded significantly in a First Superseding Indictment.

At a Wednesday hearing, federal prosecutor Candice Wong indicated that case-specific discovery was handed over to Alam’s defense attorney the previous day. Wong also said that the parties to the litigation were discussing a possible plea offer.

Attorney Michael E. Lawlor, who is now representing Alam, concurred with Wong’s description of the trajectory of the matter. He said both sides were “negotiating in earnest” with hope of reaching a “pretrial resolution” — which he said was the “best course forward at this stage.”

Alam piped up and said he wished to make a motion of his own in reference to an alleged misquote in another case. Judge Dabney L. Friedrich shut him down and suggested he speak with his attorney before further communicating with the court about any strategy matters. Alam claimed he spoke with his attorney already and tried to continue; Judge Friedrich said she wanted Alam to speak with Lawlor again before going further.

The hearing, which was handled via videoconference, was paused while Alam and Lawlor spoke in a breakout session.

After about 10 minutes, Lawlor said the connection froze and that he wished to get his client back on the line. He also asked that his client be muted so that he could address the court — apparently without being interrupted. (That didn’t happen.)

Another pause of approximately 15 minutes ensued. Alam had accidentally logged himself out of the videoconference and was subsequently re-joined to the proceeding by phone, a voice in court indicated.

Lawlor returned and attempted to wrap up the hearing; Alam again jumped in to complain about allegations that a transcript or an opinion in another case changed a judge’s quote from the word “corrupt” to the word “criminal.” The defendant said the alleged change proved, in his opinion, that the court process was “deceptive” and “dishonest.”

Alam tried to goad the judge into describing how she viewed the alleged change.

The judge said any mistaken document would “not change” any of her rulings, but she retreated when further provoked by Alam.

“That is not your case, and I’m not going to” touch the issue, the judge said to Alam. Rather, she said she’d look into it.

At one point, the judge said that a number of judges had upheld obstruction charges against other defendants.

Alam suggested that he would have to file a motion about the matter.

“I guess I’ll have to address this with Mr. Alam one on one,” Lawlor then indicated — as if to suggest his previous conference with the defendant resulted in nothing of substance. “Typically we don’t litigate motions while we negotiate dispositions.”

The suggestion that the lawyer might continue with the plea talks instead of trying to fight about an alleged discrepancy in a document in an unrelated case seemed to anger Alam.

“Then we’re not going to do that anymore,” the defendant said in a statement that suggested he wished to shut down plea talks. “We’re going to be filing a motion to dismiss count five of the superseding indictment.”

The judge seemed content that Lawlor would confer with Alam about the concern.

For now, however, the judge noted that “the parties have agreed on a future status hearing.” That hearing was set for Feb. 23.

“How am I supposed to file a motion, though?” Alam asked the judge.

The parties present quickly noted to Alam that documents could be filed remotely.

The defendant then complained that he “can’t really give him [Lawlor] a motion to file” since the hearings were proceeding remotely and not in person. He continued to claim that a judge’s words were misconstrued in an earlier case document in another proceeding — which he claimed occurred on Dec. 10, 2021.

“Every time after that it was incorrect,” Alam continued — claiming the error was oft-repeated.

Alam may have been referring in part to a Dec. 10 ruling in a case also before Judge Friedrich involving two other defendants. That opinion surrounded the nature of a “corrupt” obstruction of an official proceeding.

Beyond merely suggesting she would check into any possible error and that any error did not affect her analysis or ruling, the judge seemed eager to kick the can down the road.

“Happy holidays, everyone,” the judge said while wrapping up the proceeding.