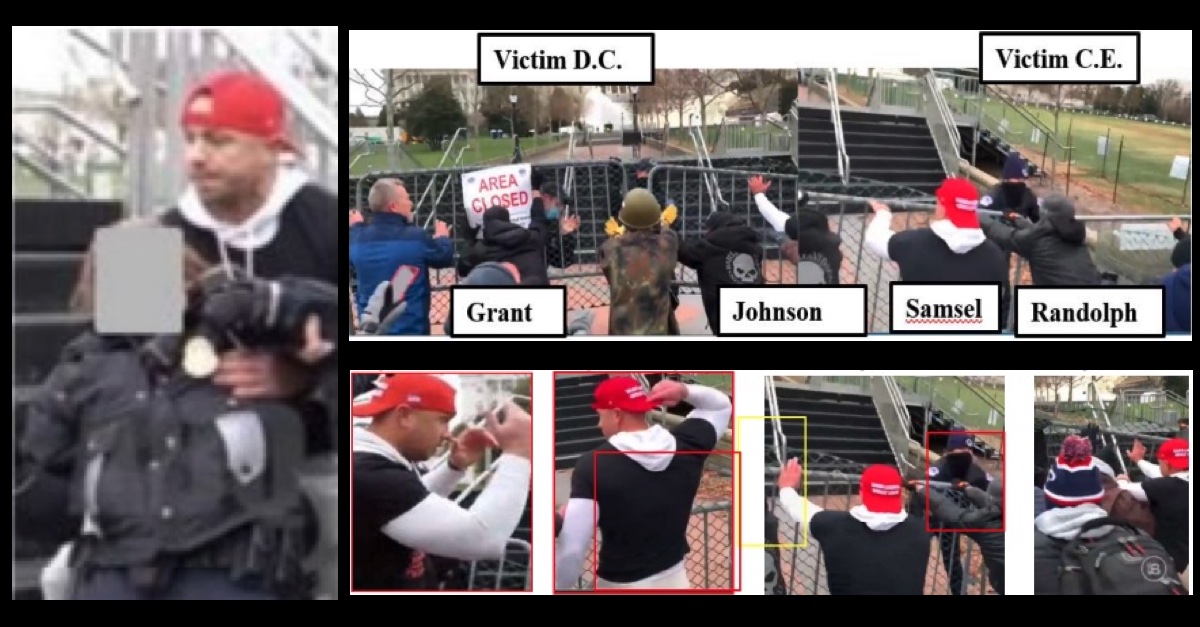 The Pennsylvania man in the backwards “Make America Great Again” hat charged with giving a police officer a concussion on Jan. 6 has a fifth co-defendant joining his criminal indictment, federal prosecutors revealed in court on Thursday, staying mum on that person’s identity.

Ryan Samsel, of Bucks County, was among several men who faced off against police at the Capitol-area roundabout known as the Peace Circle. Hundreds of members of the Donald Trump-supporting mob sought to stop Congress from certifying Joe Biden‘s win in the 2020 presidential election.

Prosecutors charged Samsel together with James Grant and signaled plans to combines those cases with those of Paul Johnson, and Stephen Randolph, whose docket was currently before U.S. District Judge Jia Cobb. Another person whose identity is unknown to the public has joined as-yet-unseen five-person indictment.

“It is under seal because the additional defendant who has been added has not yet been arrested,” Russo said.

Russo said that a redacted version of the indictment has been provided to the defense. As of press time, the documents were not publicly available.

“Present Evidence Against Them in a Single Trial”

According to prosecutors, Samsel and others approached a row of metal barricades that were blocking access to the Capitol building. A handful of Capitol Police officers were on the other side of those barricades. Prosecutors allege that Samsel and the others then began pushing and pulling on the barricades. They eventually caused one of the officers, identified in court filings as “Officer C.E.” and “O-1,” to fall backwards and hit her head on the concrete steps behind her, losing consciousness.

According to prosecutors, Samsel picked the officer up and said: “We don’t have to hurt you, why are you standing in our way.” That same officer blacked out twice more that day, and was later taken to the emergency room and diagnosed as having suffered a concussion.

Samsel’s legal team is expected to try to fight the plan to combine the cases and urge a speedy trial for his client.

On Wednesday, prosecutors announced that intention in a written notice.

A footnote said that the government “anticipates adding a fifth uncharged subject, who also participated in the Peace Circle incident described above, and who also pushed and pulled on the barricades, resulting in injuries to Officer C.E., to this indictment.”

As of the status conference on Thursday, the anticipation had ended. Prosecutors revealed that the multi-defendant indictment already has been issued. The plan might meet resistance from the presiding judge.

“Why Not Bring Together 725 Defendants in the Same Indictment?”

At Thursday’s hearing, Kelly said he wasn’t clear on which judge would oversee the new case, him or Cobb, a Joe Biden appointee.

“On the civil [litigation] side it is very typical that in an analogous situation [the case would go before] the judge who had the earliest filed case,” Kelly said. “If that holds here, it would be Judge Cobb who would inherit this case.”

Russo said that Cobb, confirmed to the bench in October 2021, was “new to these matters,” but the government did not have a preference as to which judge would handle the case.

Samsel’s attorney, however, said his client’s case should stay before Kelly.

“We’re very concerned about a number of things,” attorney Stanley Woodward Jr. said. “We do think there’s some value [in] having the judge who has the most familiarity with the medical issues in this case.”

Samsel has faced several medical issues while in detention. In April, he accused two guards at the D.C. jail of beating him so severely that they broke his nose, dislocated his jaw, and left him suffering seizures.

Prosecutors agreed to allow Samsel to be transferred to custody in Pennsylvania, where he is currently being held in a state facility. Woodward said Thursday that the U.S. Marshal Service hadn’t provided medical records, and Samsel himself, who spoke briefly, said that that a cyst in his chest might have “grown into a cancerous cyst.”

Samsel expressed that “having a new judge address that and get up to speed” on these issues would cause unnecessary delay to his client.

Woodward also indicated that he would oppose the government’s prosecution of the five defendants under one indictment.

“This is not a conspiracy allegation, they’re simply alleged to have been together at the same time,” Woodward said, adding that all the Jan. 6 defendants essentially met that same criteria.

“Why not bring together 725 defendants in the same indictment?” he asked.

Woodward, hinting at future legal fights in the case, told Kelly that the judge’s “background knowledge of the procedural posture of the case” would be “valuable in resolving those issues.”

Woodward also said another issue of concern is Samsel’s right to a speedy trial, an issue he previously raised in October.

“Mr. Samsel has been detained since Jan. 30,” Woodward said. “You’re aware of all the issues we’ve had with his detention. Now , a third or fourth superseding indictment presents a challenge to all of the defense counsel in this case to provide adequate defense to our clients, including with respect to something seemingly as simple as challenging the indictment itself.”

Kelly said that he understood Woodward’s concerns, and that he would take steps to move things along as quickly as reasonably possible, but that the government’s requests to toll the speedy trial statute have been reasonable.

“If there were an allegation that this were gamesmanship on the government’s part, I could see that eroding their argument that I should toll speedy trial for some period of time,” Kelly said. “But no one is really saying that [or] that the government delayed arresting [another defendant] in some way to manipulate the speedy trial clock.”

Read the government’s notice of related cases, below.