A former friend of murder defendant Chandler Halderson, 23, testified to gifting the accused a rifle and 480 rounds of ammunition. Halderson used that gun the following month when killing parents Bart Halderson, 50, and Krista Halderson, 53, before chopping up their bodies in a grisly attempt to hide their remains across the state of Wisconsin, prosecutors say.

Authorities are using testimony from former U.S. Army soldier Andrew Smith to show that Halderson had possession of the gun.

From prosecution opening statement, this is a photo of Andrew Smith when he visited #ChandlerHalderson and gave him the gun. @LawCrimeNetwork pic.twitter.com/jjAtH93Ti1

The defendant, who was living at home with his parents, killed them after his father learned he was lying about attending college, prosecutor William Brown told jurors in opening statements. It turned out he was mooching off of Krista and Bart. His job at an insurance company was a lie, prosecutors say. So was his volunteer work on scuba rescue teams, his new job at SpaceX in Titusville, Florida, and the head injuries he sustained from a notably timed fall down stairs, which just happened to prevent him from moving out to take the new work. 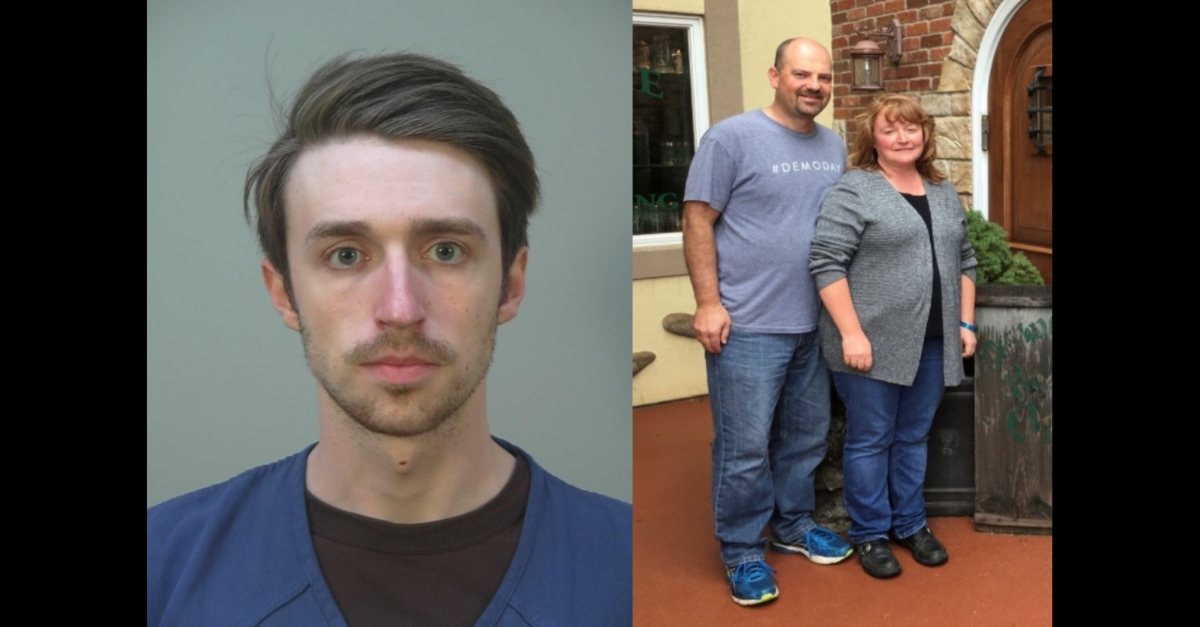 If we take that at face value, Halderson was lying to Smith, too. Smith testified Tuesday that the defendant claimed to be going to college in a Wisconsin town. Later, Halderson claimed to have gotten a job at SpaceX, but then also sustained a head injury, which required a neck brace and a hole in his head to relieve the pressure.

The men had bonded playing video games online every day, although Smith was initially stationed overseas with the U.S. Army. That service ended when Smith got a legitimate head injury in a Humvee crash in Germany, he testified. He moved to Kansas. If anything, the men started playing video games together more because they were in the same time zone now.

Smith testified to visiting Wisconsin in June 2021 while his wife was with family in Ohio. He said he took a day off from work to spend the weekend with Halderson, and he brought a gift with him: an SKS rifle and 480 rounds of ammunition. Smith said he only fired it once, and he was not using it, so he decided to give it to Halderson because he might appreciate it more. The defendant had joked about getting it as a gift, but Smith said it was mostly his idea. Halderson was happy. Brown asked how Smith knew this.

“Because he had a big smile on his face when I had given it to him as a gift,” Smith said.

According to him, Halderson said his parents understood why firearms were in this world, and that while they didn’t necessarily support having them, they knew these are helpful in situations. In this version of events, Halderson said he was going to move soon, taking the gun to Florida when he moved for his new job in SpaceX. The purported head injury followed after.

Smith said that, when gifting the rifle, he took a picture of Halderson’s Wisconsin ID with the rifle serial number to confirm the transfer.

“So that way, if anything like this would occur, that it wouldn’t necessarily come back to me,” he said.

Smith said he reached out to investigators on learning authorities arrested Halderson.

Smith: I reached out to them [police officials] immediately upon figuring out that he [Chandler Halderson] had been arrested … To put it blankly, sir, I served in the Army and I’m not going to get f***** for something I didn’t do. #ChandlerHalderson @LawCrimeNetwork pic.twitter.com/agumqFYdsF

Prosecutors said Halderson shot Bart in the back on July 1, at about the same time the father planned on them meeting college officials. That rifle was found in a barn on property belonging to his girlfriend’s family. His father’s torso was found nearby. Authorities have only found pieces of Krista’s legs, but they cannot confirm how she specifically died. Prosecutors maintain her son murdered her when she returned home by 5 p.m. that July 1.

Dr. Rogalska: I do not actually know what injury caused the death of Krista Halderson. But I believe she died as a result of some violence, a non-natural death. And the cause of death is described as homicidal violence.#ChandlerHalderson @LawCrimeNetwork pic.twitter.com/oTe3Z1khTn