In Capitol Siege Lawsuit, Judge Refuses to Side with Rep. Eric Swalwell Against Rep. Mo Brooks — For Now 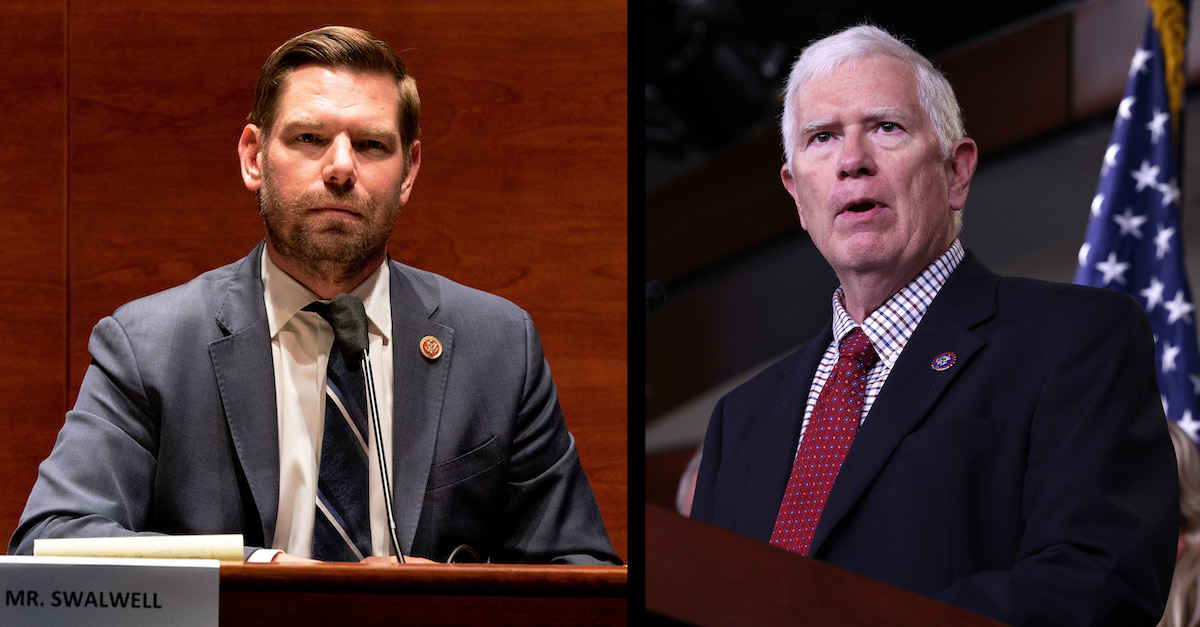 A federal judge has settled an intermediate skirmish in a civil lawsuit filed by Rep. Eric Swalwell (D-Calif.) against Donald Trump, Donald Trump Jr., Rep. Mo Brooks (R-Ala.), and Rudy Giuliani in connection to the Jan. 6th siege on the U.S. Capitol.

Judge Amit P. Mehta of U.S. District Court for the District of Columbia refused to enter a default judgement on Monday against Rep. Brooks after a request by Rep. Swalwell to do so.

Swalwell argued in court papers dated July 1 that Brooks failed to “timely respond” to his lawsuit which alleged that the various named defendants — including Brooks — committed a series of civil wrong by stoking and inciting the Jan. 6th attacks. Generally, as a matter of civil procedure law, failing to respond to a lawsuit will result in a default judgement against a named defendant. That’s what Swalwell wanted to occur viz. Brooks, as this paragraph tidily sums up — all while rebuking on Brooks for being somewhat difficult to find in general (citations omitted):

After some effort, Defendant Brooks was served with the summons and complaint on June 6, 2021 “at [his] dwelling or usual place of abode with someone of suitable age and discretion who resides there.” The affidavit of service was filed on June 8. Under the federal rules, Brooks was required to serve his response within 21 days of service of the complaint, in this case no later than June 27, 2021. To date, Brooks has not done so.

“Where, as here, the complaint does not allege damages in an amount certain, the moving party must apply to the Court directly for a default judgment,” the aptly named Motion for a Default Judgment continues. “Plaintiff does so now.”

Judge Mehta did not completely agree with Swalwell’s assertion that Brooks “has not” replied to the original lawsuit. Rather, Mehta said that because Brooks filed a “Petition to Certify,” he “cannot be considered ‘an essentially unresponsive party'” to the case. That fact — and because “strong policy reasons favor [the] resolution of disputes on their merits” — together led Mehta to deny Swalwell’s motion and to give Brooks a pass. For now. The order denying the motion was without prejudice. In other words, if Brooks continues to skirt the case, then such a move could — and likely would — legally backfire.

The 65-page Swalwell lawsuit, which was filed March 5th, will therefore continue.  It alleges nine counts in total against all of the aforementioned defendants including Brooks: (1) conspiring to violate civil rights, (2) neglecting to stop a civil rights interference, (3) and (4) two counts of negligence per se, (5) bias-related crimes, (6) intentional infliction of emotional distress, (7) negligent infliction of emotional distress, (8) aiding and abetting common-law assault, and (9) negligence.

“The peaceful transfer of power is a sacrament of American democracy,” the lawsuit argues. “Donald Trump, his son Donald Trump Jr., his advisor Rudy Giuliani, and Congressman Mo Brooks, together with many others, defiled that sacrament through a campaign of lies and incendiary rhetoric which led to the sacking of the United States Capitol on January 6, 2021.”

Donald Trump lost the 2020 presidential election; he was unwilling to accept defeat. Trump lied to his followers, telling them that the certification of Joe Biden’s election was a “coup” and that their country was being stolen from them. The Defendants filed frivolous lawsuits, all of which failed. The Defendants tried to intimidate state officials, none of whom caved to the pressure. Out of options and out of time, the Defendants called their supporters to Washington, D.C. on the day Congress met to certify Joe Biden’s win, telling them to “Stop the Steal” and “be wild.” Thousands came to the District in response. Some planned violence at the Capitol in advance; some were stirred to violence by the Defendants’ words on that day.

Trump implored the crowd to “fight like hell” and “walk down Pennsylvania Avenue . . . to the Capitol.” According to an analysis of cell phone location data, approximately 40% of the rally attendees did just that.

More specifically, the document alleges that Brooks stated as far back as November 5, 2020 that he “lack[ed] faith that this was an honest election” and would be “very hesitant to certify the results of this election if Joe Biden wins.” On November 27, 2020, he said via Twitter that “Joe Biden DID NOT win lawful vote majority in Georgia.”

Because of this rhetoric, the lawsuit claims, then-President Trump asked Brooks to speak at the January 6, 2021 rally which preceded the attack on the Capitol.

“The theme of Brooks’ speech was that patriots are sometimes required to make extraordinary sacrifices for their country, and that day, January 6, was one such occasion,” the lawsuit alleges. “Brooks told the crowd, just one minute into his speech, ‘We are great because our ancestors sacrificed their blood, their sweat, their tears, their fortunes, and sometimes their lives.’ He continued that the country faced a crisis of historical magnitude, its greatest crisis since World War II, and perhaps even the Civil War.”

Brooks continued on Jan. 6th to inflame the crowd, the lawsuit alleges, with the following rhetoric:

We are here today because America is at risk unlike it has been in decades, and perhaps centuries.

Today is the day American patriots start taking down names and kicking ass! [Crowd cheers.] Now, our ancestors sacrificed their blood, their sweat, their tears, their fortunes, and sometimes their lives, to give us, their descendants, an America that is the greatest nation in world history. So I have a question for you: Are you willing to do the same? My answer is yes. Louder! Are you willing to do what it takes to fight for America? Louder!! Will you fight for America?!

“Congressman Brooks urged rally attendees to seek redress at the ballot box in the 2022 and 2024 elections and never, in any way, shape or form, asked rally attendees to engage in any violent behavior at the U.S. Capitol,” Brooks’ office said in a March 3, 2021 press release.

Brooks has demanded apologies from the media and from his detractors, including Democrats, who suggested his words played a role in what later occurred on Jan. 6th:

The full Brooks statement is here.

[both images via Anna Moneymaker/Getty Images]