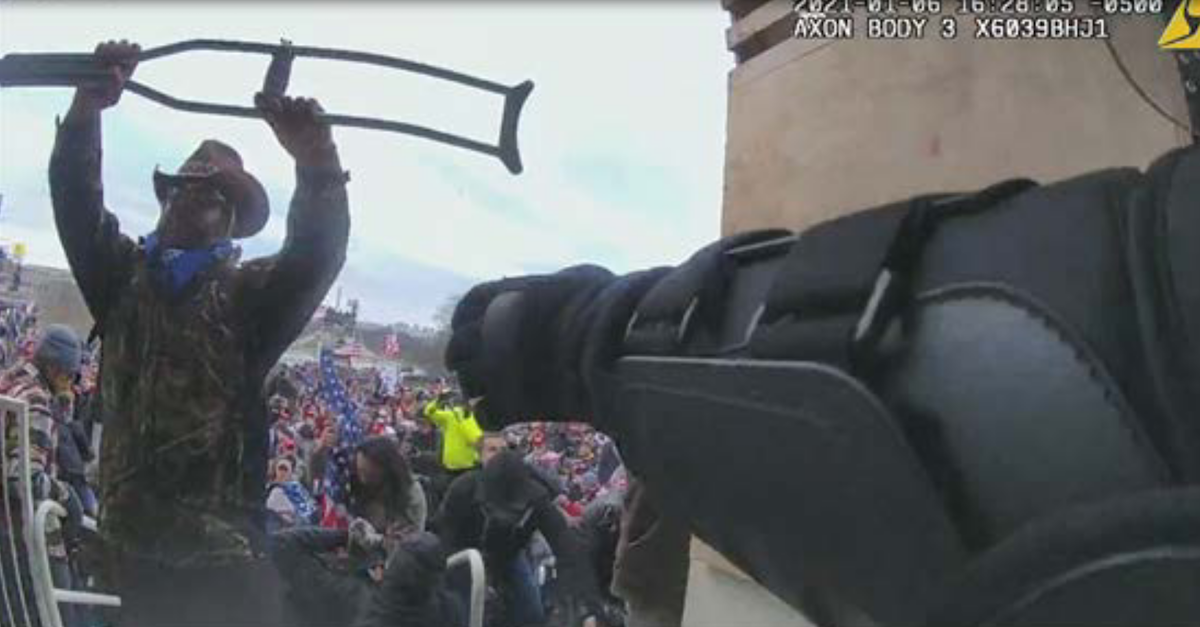 Of the many videos that impeachment managers unspooled during former President Donald Trump’s Senate trial, one of the most brutal scenes showed rioters engaging in hand-to-hand combat with authorities inside the tunnel leading to the U.S. Capitol. Federal prosecutors charged one of the alleged combatants captured by police body cameras using a crutch as a weapon against the officers.

On Feb. 11, just one day after footage of the melee inside the tunnel became public, the FBI Newark Field Office interviewed an unidentified witness who contacted them about Dallas resident Luke Coffee, whom authorities believe to be the crutch-wielding assailant.

Using this tip, the FBI’s field office in Dallas picked up the investigation two days later on Feb. 13, and prosecutors say that Coffee conceded to authorities that he was the man pictured holding up the crutch above his head. But Coffee denied attacking anyone with it.

“Coffee stated he did not engage in any type of physical confrontations with the police while at the Capitol Building,” FBI agent Jeffrey Johannes wrote in a 20-page statement of facts.

Believing that was false, authorities kept collecting tips on Coffee from the public and secretly opened a sealed case against him on Feb. 16, charging him with six counts that included assault with a dangerous weapon.

Those charges became public on Thursday, in court papers replete with images of the confrontations inside, outside and around the tunnels.

“This video shows that, after being forced back from the officers, Coffee charged at the officers while still holding the crutch,” Johannes wrote in a 20-page statement of facts. “The video also shows Coffee holding the crutch in a more aggressive manner and position towards the police officers. It appears to your affiant, based on this footage, that Coffee intended to further use the crutch as blunt object weapon by positioning the crutch directly toward the officer’s upper chest/head area. During this same recorded MPD body cam footage, it appears to your affiant that two MPD officers are required to hold back Coffee.”

Authorities embedded still frames from the video in court papers. 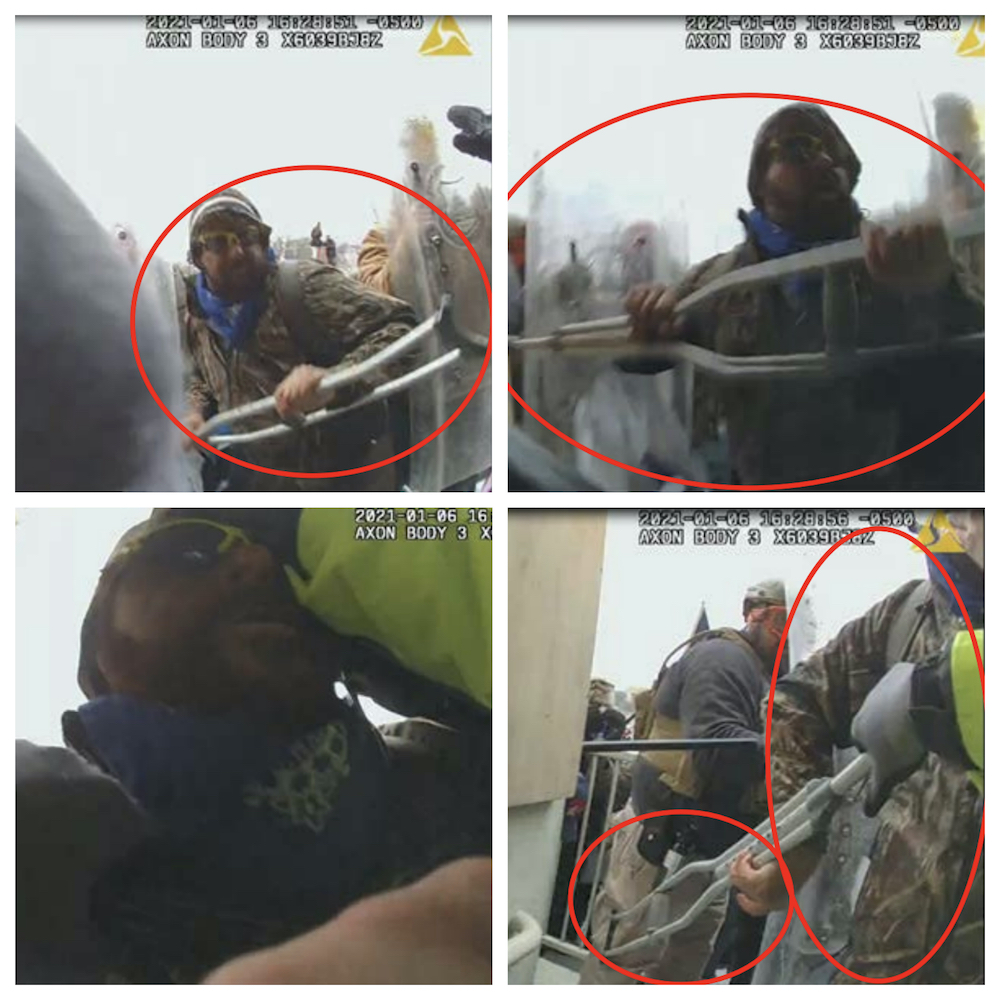 Inside the FBI agent’s statement of facts, images show the melee inside, outside and surrounding the Capitol tunnel from various angles, including from security camera footage and YouTube videos shot by civilians. 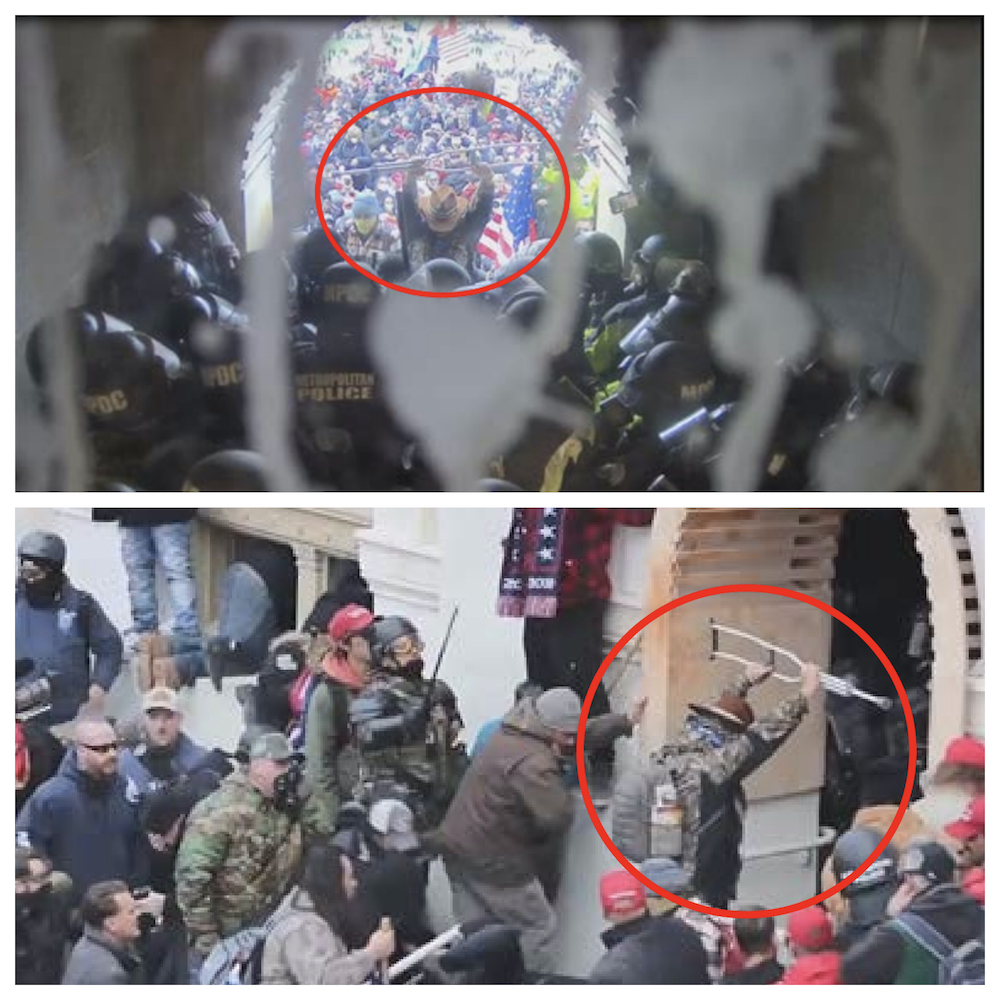 Authorities note that Coffee was hardly alone in these attacks—or even in his alleged choice of weapons.

“In the various videos I have reviewed in connection with my investigation, I have observed this same crutch used by rioters to attack MPD and USCP officers,” the FBI agent wrote.

Prosecutors have previously estimated that there were some 140 assaults against U.S. Capitol and Metropolitan police on Jan. 6.

Court papers refer to Coffee’s Facebook page, which currently appears to be inactive.

In an article titled “The Insurrectionists Among Us in North Texas,” the Dallas publication Central Track quoted Coffee calling Jan. 6th an “Historic Day for ‘Merica!!” in a caption of photographs taken in Washington, D.C.

(Photos courtesy of the Justice Department)