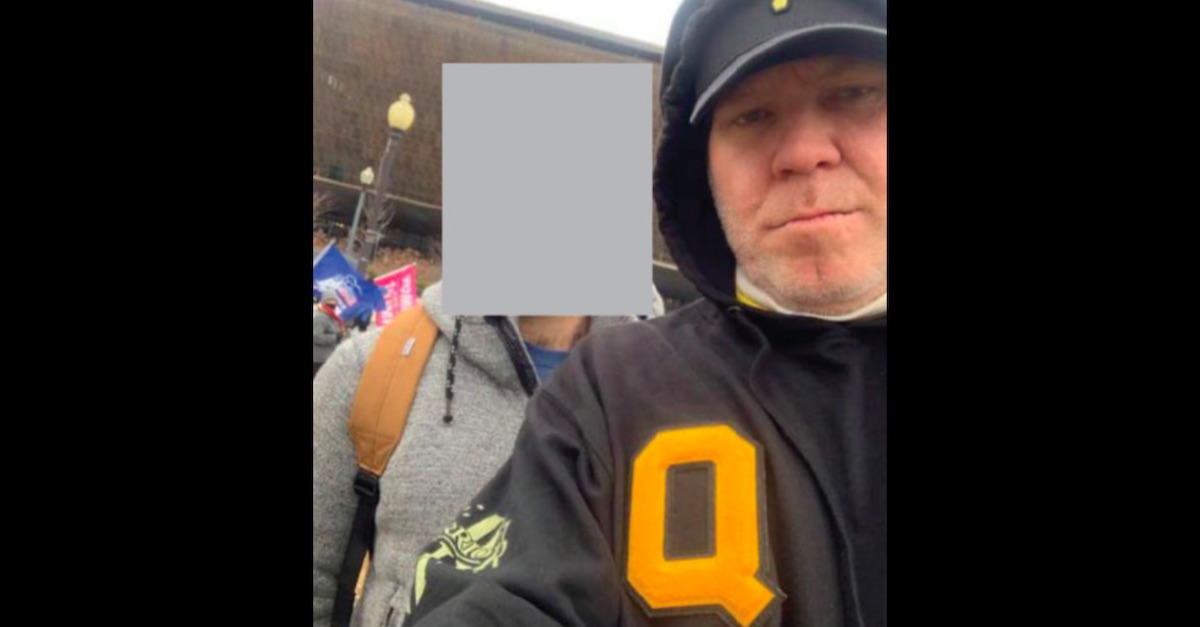 The 51-year-old Pennsylvania resident was previously ordered released on bond by the Western District of Pennsylvania over the weekend despite vociferous objections from the FBI and Pittsburgh-area Assistant U.S. Attorney Soo C. Song.

That order was held in abeyance pending intervention by the D.C. U.S. Attorney’s Office–who ultimately said they did not want Grayson locked up pending trial in spite of his alleged lack of remorse over the Jan 6. attack on the U.S. Capitol Complex.

Monday’s hearing largely went by without controversy until the D.C. Pre Trial Services Agency raised the issue of an outstanding warrant for Grayson’s arrest in West Virginia.

The pre-trial services representative sprung this information on the court, the government and the defense near the tail end of the proceedings, saying they wanted Grayson to “resolve” the warrant “as an additional condition of his release.”

That request threw the otherwise placid and agreeable proceedings into a briefly hectic tailspin as the government attorney, defense counsel and the judge all wondered out loud about the development and then subsequently scrambled to understand just what, exactly, pre-trial services actually wanted the defense to do about it.

Grayson’s defense attorney said they were “surprised” and quickly called for a private breakout room to confer with their client.

“They were not gonna come get him,” Pittsburgh-based attorney Stanley Greenfield said, claiming the issue only came about due to a misunderstanding and an inaccurately-worded report from pre-trial services about what the West Virginia State Police wanted.

“Things are already underway to resolve this outstanding warrant,” Grayson’s D.C.-based attorney added. He also noted that this issue was raised during the Pittsburgh bond hearing but said that the defense ultimately had no objection to resolving the warrant as a condition of Grayson’s release.

Smith, for her part, was unclear and said she didn’t know what “resolve” actually meant in context here. And pre-trial services was initially not much help on the matter. The government eventually said it would make sense for Grayson to turn himself in.

Judge Meriweather very slowly, to the point of intentionally ploddingly and with extreme skepticism in her voice, asked if pre-trial services really wanted the defendant to turn himself in since D.C. wasn’t even seeking his detention in the present case.

“Do you. Want him? To…turn himself in?” she asked.

Pre-trial services, when pressed on the particulars, repeatedly answered with the vague suggestion that the warrant be “resolved” before finally saying that one way this could happen is that Grayson could turn himself in to authorities in West Virginia.

After initially voicing their own lack of position on the matter, however, the government and pre-trial services requested that Grayson turn himself in within 24-48 hours.

The court cautiously agreed to having Grayson “resolve” the warrant issue but stopped just short of having him turn himself in within that requested time frame as the only way of resolving the issue.

The massive winter snowstorm currently battering the northeastern United States was the foremost practical concern with fully endorsing the government’s request. Secondarily, the court credited the defense’s position by saying that there were valid concerns about “conflicting information.” Specifically, as to whether the offense the warrant is based on was actually “extraditable.”

“We could have a situation where the left hand doesn’t know what the right hand is doing,” Meriweather said, expressing a strong desire for Grayson not to be detained unnecessarily. He was ultimately given 72 hours to surrender himself or otherwise clear up the warrant issue in the Mountain State.

The hearing was focused on “courtesy supervision,” a form of release in situations where another jurisdiction refers a defendant for prosecution.

Grayson, who was pre-outfitted with an ankle monitor on Monday morning, was granted home detention subject to the following conditions: pre-trial supervision in Pennsylvania, he must surrender his passport, have his travel restricted to Western District of Pennsylvania and D.C., he must avoid contact with victims or witnesses, is not allowed to possess any weapons, cannot engage in any excessive alcohol use, cannot use any other controlled substances unless prescribed, he must submit to drug testing and participate in therapy if directed by pre-trial services and must report any change in contact information or law enforcement contacts.

Grayson’s original release on bail, despite being paused, ruffled feathers in the U.S. Department of Justice.

“He harbors continued aspirations of violence,” Song said last week. “He would do it again, in his own words.”

Some of those alleged words include the following messages Grayson sent to an accomplice following a pro-Trump event in November 2020, according to the FBI:

“I left one unconscious so I did my little part and got the fuck out before I got arrested,” he allegedly said in a private message on November 16, 2020.

“We were smashing bro,” he allegedly wrote in another message, “went to the van I rented and geared up..had to leave at 7pm though, it wasn’t really bad yet..I was beating commies with a flag pole I picked up and looked like it wasn’t going to be that bad Proud Boys were everywhere..cops weren’t doing a fukin thing watching old people get fucked with it was sickening.”