College Student Who ‘Didn’t Even Vote’ in 2020 Election But Carried ‘Members Only’ Sign into Senate Chamber on Jan. 6 Gets One-Month Sentence 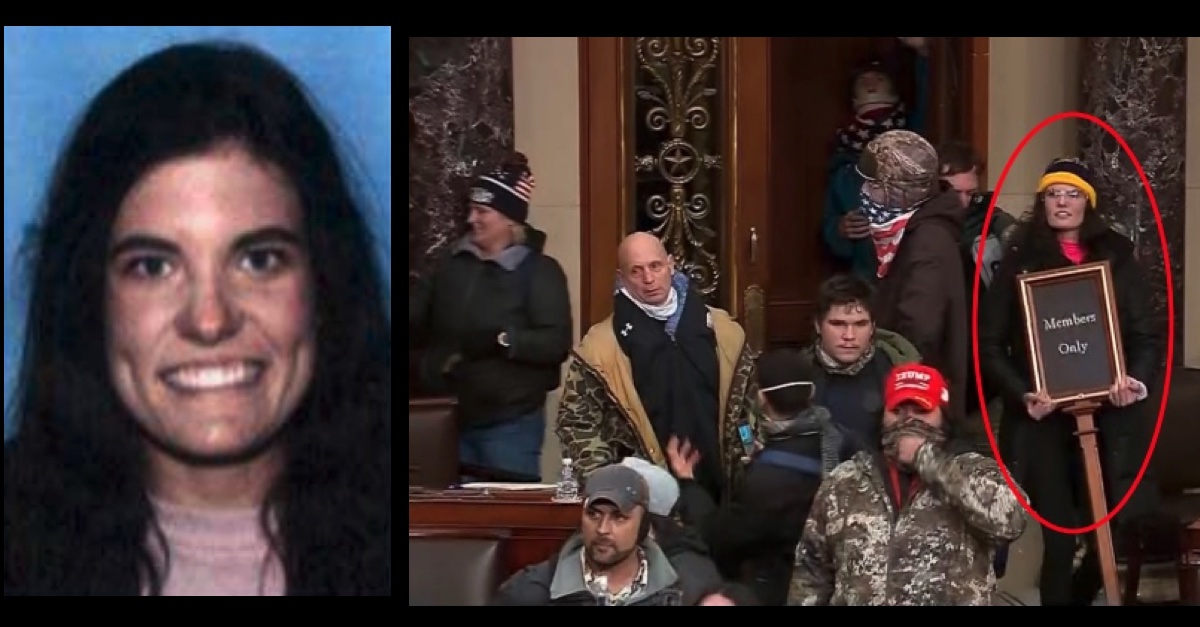 The college student who was seen carrying a “Members Only” sign through the Capitol building on Jan. 6 has been sentenced to 30 days behind bars.

Gracyn Courtright, who was 23 years old and a college student at the University of Kentucky, pleaded guilty in August to one count of entering and remaining in a restricted building.

She is seen in pictures and on surveillance video carrying a sign that said “Members Only” throughout the Capitol and into the Senate chamber that had been evacuated just moments before members of the mob forced their way in.

Prosecutors had sought six months of incarceration; Courtright had asked for 30 days.

Courtright, who is originally from West Virginia, had also been charged with theft/embezzlement of U.S. property, disorderly conduct, and parading, demonstrating, or picketing in a Capitol building. In arguing for a 6-month prison sentence, Assistant U.S. Attorney Rachel Fletcher said that the government had received evidence that Courtright was on the Senate floor on Jan. 6 only after she had entered her guilty plea, and said that if they had that evidence prior to her plea, prosecutors would have seriously considered charging her with obstructing an official proceeding.

Courtright’s attorney, Thomas Abbenante, pushed back on this, saying that Courtright didn’t know that she was in the Senate chamber, a position she maintained when questioned by U.S. District Judge Christopher Cooper.

Fletcher also pointed to Courtright’s social media posts and texts after the riot, saying they indicated a lack of remorse.

Indeed, after the Capitol attack, Courtright posted to Instagram a defiant message that said: “Infamy is just as good as fame. Either way I end up more known. XOXO.” 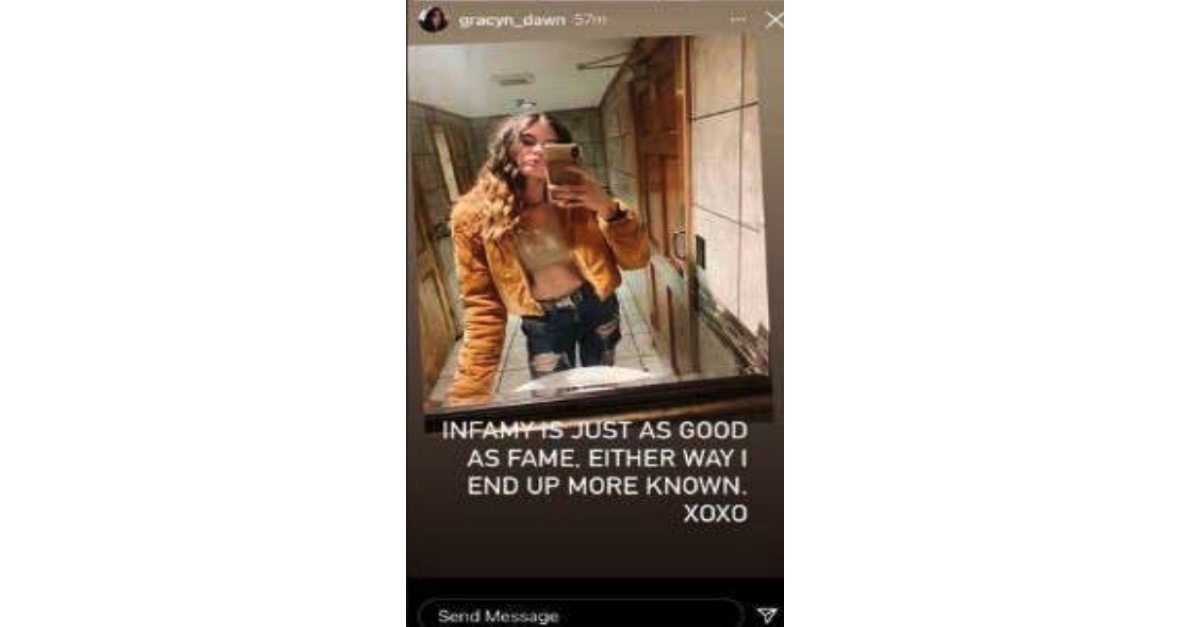 In arguing for a 30-day prison sentence, Abbenante said Courtright is a “foolish young lady” who “didn’t even vote in the election, had no political agenda.” Essentially, he said, she just got “caught up” in the moment.

Friday’s hearing was briefly sidelined when it came time for Courtright to speak on her own behalf. As she began to speak, she said that she was going to read from a piece of paper, but she was audibly emotional and struggled to speak.

“Take a deep breath, compose yourself,” Cooper told her. “There’s no rush.”

A moment later, Cooper announced that there would be a five-minute break and requested that a nurse be summoned. Abbenante said that he would read Courtright’s statement on her behalf, but Cooper insisted on pausing the hearing.

Once the hearing resumed, Courtright spoke on the record. She said that the Instagram post was an act of self-defense.

“I didn’t understand where all this was headed just yet,” Courtright told Cooper. “I didn’t realize that what I had done was so horrible in that moment. I was just trying to defend myself. I couldn’t take anymore of people telling me that I’m a horrible person,” she said, adding: “I am a horrible person.”

Courtright has been suspended from the University of Kentucky as a result of her presence in the Capitol on Jan. 6. She told Cooper that even though she “just followed the crowd,” she understands her actions that day will follow her forever.

“Future employers will only see the girl who trespassed in the nation’s Capitol and took pictures and posted pictures thinking she was just so cool,” she said.

Courtright spoke about her daily life since Jan. 6, and said tries to avoid revealing her identity to other people.

“I have no one else to blame but myself,” she said. “I even hold my head down and dod’t make eye contact with my neighbors when I see them driving on the road for fear of what they might think of me.”

“I hate having to say my name out loud,” she also said. “Certain encounters, like when you check out at a store and when they ask you for email or phone number, have become almost unbearable for me. The whole time, I wonder do they recognize my face, do they recognize me?”

Cooper questioned Courtright directly, and tried to impress upon her just how dangerous things were on that day.

“You know who Ashli Babbitt is, right?” Cooper, a Barack Obama appointee, asked her, after she told him she had no idea she was on the Senate floor.

“No, Your Honor,” Courtright said.

“2:42,” Cooper said. “When she was killed it was 2:42. She was on the House side trying to climb through a window. You went in on the Senate side. Did you know what was on the other side of some of those doors you saw people trying to break down?”

“Was it cool to have been there?” Cooper later asked.

“No,” Courtright responded, her voice emphatic.

Cooper spoke to the fact that Courtright didn’t vote in the 2020 presidential election, despite being among the hundreds of Donald Trump supporters who stormed the Capitol in an attempt to stop the counting of Electoral College votes and the certification of Joe Biden’s win.

“In my view, if you or any citizen wants to participate in our democracy or get involved in government or politics, casting an informed vote is the price of admission,” Cooper said.

Cooper also took note of Courtright’s age, and drew comparisons to the younger congressional staffers who were in danger as rioters stormed the Capitol.

“Luckily, because of coronavirus there weren’t as many staffers there,” Cooper said. “But there were some folks just about your age, congressional staffers on the other side of those doors thinking they better call their family, because this may be it.”

At the end of the hearing, Cooper agreed to allow Courtright to voluntarily surrender to federal custody to serve her sentence.