Biden Criticized, Compared to Trump after Stating Support for DOJ Prosecution of Anyone Who Ignores Jan. 6th Committee Subpoenas 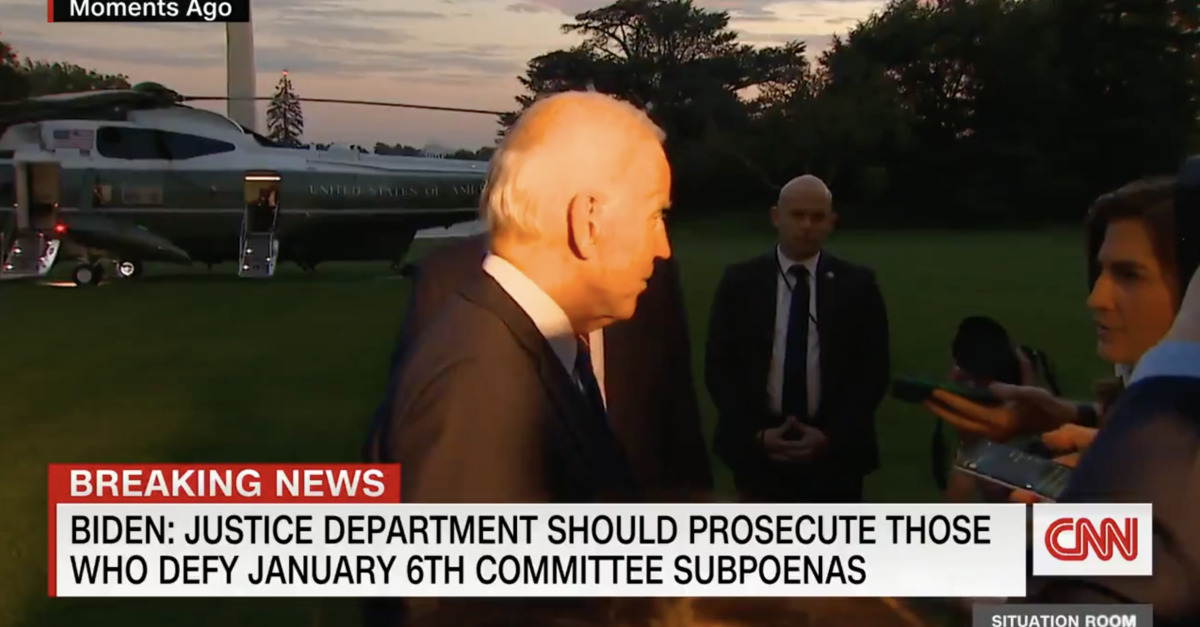 President Joe Biden was accused of violating a campaign promise to not intervene in the activities of the U.S. Department of Justice after making comments on the South Lawn as he left Marine One on Friday night.

The 46th president was asked by a reporter what his message was to “those who defy congressional subpoenas” issued by the Select Committee to Investigate the January 6th Attack on the U.S. Capitol.

“I hope that the committee goes after them and holds them accountable,” Biden said.

CNN’s Kaitlyn Collins immediately followed up by asking if they should be prosecuted by the DOJ.

Reaction was swift and decidedly negative among some Washington, D.C. and New York City media circles.

“Biden publicly supporting prosecution in individual cases conflicts with his pledge of a wall between the [White House] and [Department of Justice] to depoliticize the department,” Politico’s Alex Thompson tweeted.

Maggie Haberman of The New York Times categorized Biden’s comments an attempt to thread the needle between two national conversations about the superstructure of U.S. democracy during the past presidential administration. Haberman cautioned, however, that U.S. Attorney General Merrick Garland wouldn’t necessarily be moved to criminally prosecute select committee stonewallers just because of the president’s comments.

Product of the tension between “trump’s a national emergency” and “restore norms,” though it doesn’t mean Garland moves ahead. https://t.co/alKkrdAsXJ

Several former members of the Donald Trump administration have acceded to their ex-boss’s demand that they refuse to provide either documents or testimony to congressional investigators regarding the pro-Trump attack on the national seat of legislative government on Jan. 6. Premised on claims of executive and attorney-client privilege, legal experts have generally criticized those denials, particularly in the case of former chief White House strategist Steve Bannon.

In turn, allies of the current president have been adamant in their calls for Bannon to be prosecuted in light of his refusal. The committee itself has said they plan to move forward and enforce their subpoenas by initiating criminal contempt proceedings.

But Biden’s comments surrounding the affairs of the DOJ could potentially complicate any such prosecution going forward.

The comments might also be interpreted as clashing with an internal policy memo about White House contacts with other agencies and departments.

That memo reads, in relevant part [emphasis in original]:

Communications with the Department of Justice: Specific procedures apply to communications with the Department of Justice (DOJ) in order to ensure that DOJ exercises its investigatory and prosecutorial functions free from the fact or appearance of improper political influence. DOJ plays many different roles—including as a prosecutorial and law enforcement agency, legal advisor to the President and Executive Branch departments and agencies, litigator that defends U.S. government policies and actions, and policymaker on a range of issues. The proper White House approach to the Department depends on which DOJ function is involved. Review the specific policies carefully, but note that with certain exceptions described below, initial contacts with DOJ should be made by the Counsel’s Office.

Biden’s answers to a reporter’s questions during a flurry of press activity likely wouldn’t qualify as a direct contact here, but the White House and DOJ itself nevertheless both issued statements immediately seeking to backtrack from the recommendation to prosecute.

“As @potus has said many times, January 6th was one of the darkest days in our democracy,” White House Press Secretary Jen Psaki tweeted in full damage control mode. “He supports the work of the committee and the independent role of the Department of Justice to make any decisions about prosecutions.”

“DOJ will make its own independent decisions in all prosecutions based solely on the facts and the law,” DOJ spokesperson Anthony Coley added. “Period. Full stop.”