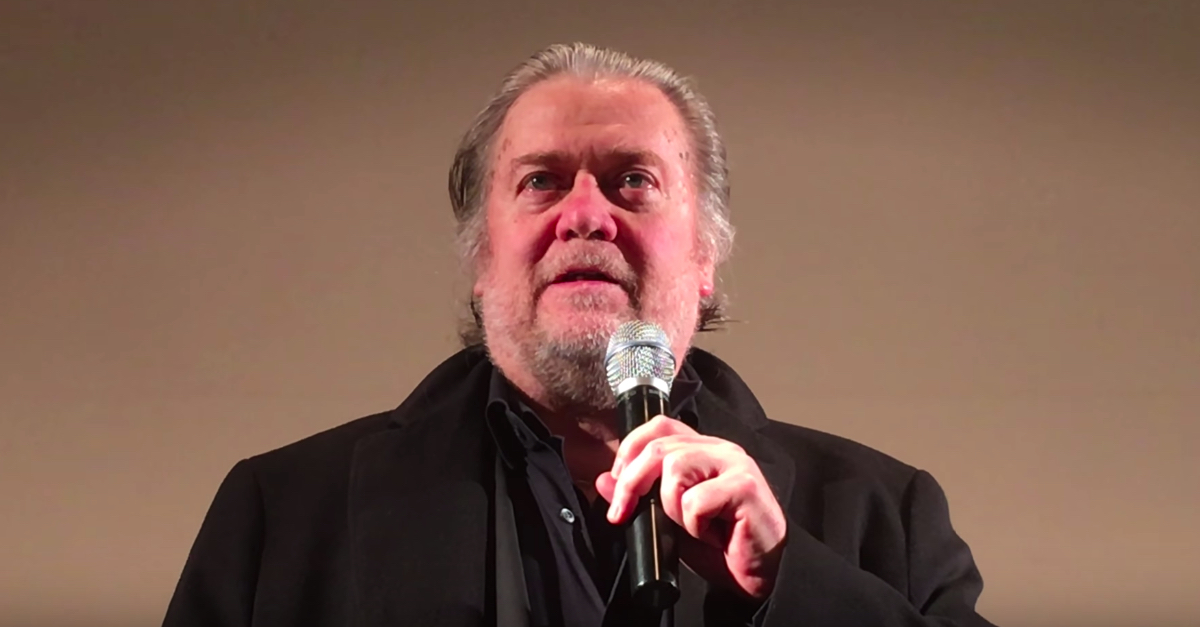 Former chief White House strategist Steve Bannon has rebuffed a congressional subpoena related to the Jan. 6 attack on the U.S. Capitol Complex by claiming executive privilege through his attorney.

The refusal came by way of a letter sent to the select committee by Robert Costello. In the letter, Bannon’s lawyer said that former president Donald Trump asked his former aides to assert privilege and deny the subpoena requests for documents and testimony.

“It is therefore clear to us that since the executive privileges belong to President Trump, and he has, through his counsel, announced his intention to assert those executive privileges enumerated above, we must accept his direction and honor his invocation of executive privilege,” Costello wrote. “Until these issues are resolved, we are unable to respond to your request for documents and testimony.”

“We will comply with the directions of the courts, when and if they rule on these claims of both executive and attorney client privileges,” the two-page letter concludes. “Since these privileges belong to President Trump and not to Mr. Bannon, until these issues are resolved, Mr. Bannon is legally unable to comply with your subpoena requests for documents and testimony.”

Bannon, however, was not working in the executive branch when the pro-Trump mob attacked the national seat of legislative government.

“These privilege invocations will mostly fail on the merits, but that’s not the point,” national security and federal employment attorney Bradley P. Moss told Law&Crime. “This is a desperate play for time to run out the clock until after the midterms, and everyone knows it. If the Select Committee doesn’t move swiftly on this, its fundamental ability to get information will be crippled.”

“Not only do they argue executive privilege for a person outside the executive branch, they also, somehow, invoke ‘attorney-client privilege,'” Honig wrote. “You’re not missing anything, folks: this is nonsense.”

In quick succession, the Biden White House announced that, at least as to how the select committee’s request pertains to records sought from the Trump White House, those executive privilege claims would not be respected.

“After my consultations with the Office of Legal Counsel at the Department of Justice, President Biden has determined than an assertion of executive privilege is not in the best interests of the United States, and therefore is not justified as to any of the Documents,” White House Counsel Dana Remus wrote in a letter to David Ferriero, the archivist in charge of the National Archives.

“The effect of this decision may be limited,” Remus added — noting that the determination only relates to one small set of records that the White House was provided on Sept. 8.

Trump and his attorneys will have at least 30 days to challenge the White House’s decision in court before the records are provided to the Jan. 6 commission, according to Politico.

That leaves the Bannon refusal ripe for the U.S. Congress to do what it seldom does — enforce a subpoena through judicial processes.

Legal observers say they’ll believe it when they see it.

“During the Trump era the House Democrats demonstrated an inability (and arguably an unwillingness) to enforce its subpoenas,” Tulane Law Professor and political investigations expert Ross Garber told Law&Crime. “This is the natural consequence. Given that the Trump team’s move has long been anticipated, it would be incomprehensible if the House didn’t have a plan that it implemented expeditiously. One option would be to make a criminal contempt referral to the Department of Justice. This would put Attorney General Garland in the hot seat to decide whether to initiate a prosecution.”

The bi-partisan committee, for its part, made noises about doing exactly that late Friday afternoon.

“Bannon has indicated that he will try to hide behind vague references to privileges of the former President,” the select committee chairs wrote in response. “The Select Committee fully expects all of these witnesses to comply with our demands for both documents and testimony . . . We will not allow any witness to defy a lawful subpoena or attempt to run out the clock, and we will swiftly consider advancing a criminal contempt of Congress referral.”