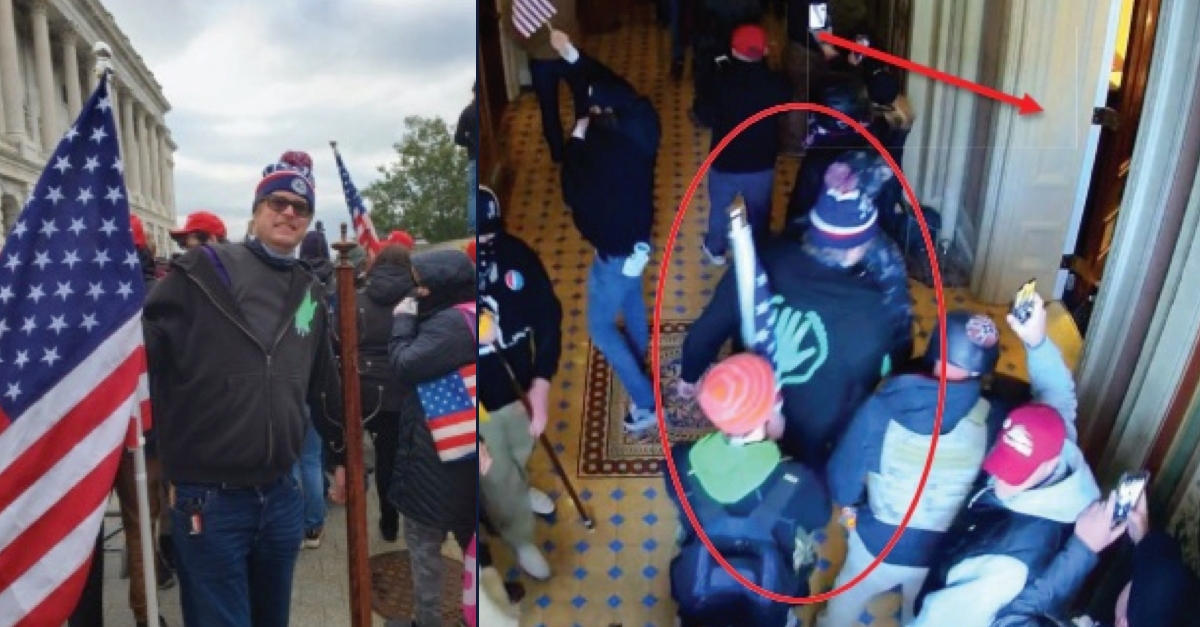 Dustin Thompson seen holding a flagpole he allegedly stole from the U.S. Capitol on Jan. 6 (images via FBI court filings)

The Ohio man who stole a bottle of bourbon and a coat rack from the U.S. Capitol building on Jan. 6 — and admitted lying in his trial testimony about why he did it — will spend years in prison.

Dustin Thompson, 38, was convicted in April after a three-day jury trial of obstruction of an official proceeding, a felony, and five misdemeanors, including theft of government property and offenses relating to disorderly conduct and trespassing.

According to prosecutors, Thompson and his co-defendant, Robert Anthony Lyon, 28, went to the Capitol on Jan. 6 after Donald Trump, falsely claiming that Joe Biden’s 2020 electoral win was due to voter fraud, instructed his supporters to protest Congress’ certification of the Electoral College vote.

Thompson and Lyon were on restricted Capitol grounds by around 2:00 p.m., and Thompson was the first to go inside. He went to the Senate Parliamentarian’s office and grabbed a bottle of bourbon before being directed to leave the building by Capitol Police. Thompson later re-entered the building, this time with Lyon, and nicked a coat rack from the same office.

“We need to get the f*** out with this trophy,” Thompson said in a message to Lyon in an apparent reference to the coat rack.

Later that evening, Thompson was stopped by U.S. Capitol Police officers while waiting for an Uber while still on Capitol grounds. Thompson fled — leaving the coat rack behind — while his co-defendant, Lyon, was arrested.

Thompson faced a maximum 20 years in prison on the obstruction charge. Prosecutors requested a sentence of 70 months, while Thompson asked to serve 12 months and one day behind bars.

At Friday’s sentencing hearing, Assistant U.S. Attorney William Dreher noted that while a short time in the Capitol is usually a mitigating factor in determining an accused rioter’s sentence, Thompson’s relatively brief stints in the building actually warrant a steeper punishment.

“Unlike those other individuals, Mr. Thompson was stealing property from the U.S. Capitol,” Dreher said. “It is unsurprising that he only spent a few minutes inside the Capitol each time, because what else was he going to do, walk around and say ‘hi’ to the Capitol Police officers while attempting to cart out stolen property that he had just removed from the Senate Parliamentarian’s office? I think not.”

Dreher added that Thompson left the building “as quickly as he could while he was possessing that property.”

Dreher also argued that a 70-month prison sentence is not extraordinary in federal criminal cases, citing as an example people who are found with “a pound of methamphetamines” in their home.

“Parents of small kids get sentenced to that all the time,” Dreher said, adding that far less attention gets paid to those types of cases. “Those individuals serve significant time. And they did not participate in one of the most disgraceful events in the history of this country.”

Thompson’s lawyer Andrew Stewart tried to convince the judge that his client was indeed remorseful, despite the fact that he defended his actions to the jury during his trial.

“The thing that’s admirable about Mr. Thompson is that he’s putting the work in,” Stewart said, trying to separate his client from rioters who have expressed “persistent reluctance to really accept responsibility for what they did and acknowledge that their belief system is wrong and based on a lie.”

“I think it’s important to acknowledge that Mr. Thompson has done that,” Stewart added.

The defense lawyer also pointed to his client’s testimony before the House Committee investigating the Jan. 6 attack.

“When he spoke with the Jan. 6 committee he completely acknowledged his actions, what his intent was,” Stewart said. “There wasn’t the same equivocation that we heard or lack of candor that was present during the trial.”

Thompson, speaking on his own behalf, insisted that he has regrets.

He also apologized directly to Senior U.S. District Judge Emmet Sullivan “for not being candid and truthful with you” during his trial testimony. According to prosecutors, Thompson made several false statements during trial and told the jury that he had taken the coat rack so that it could not be used as a weapon against law enforcement.

Thompson said that his “participation in the insurrection threatened the government,” adding that he takes “full responsibility” and is “truly sorry.”

Sullivan appeared skeptical, saying that he didn’t understand how someone like Thompson, a college graduate, could go down a “rabbit hole” of misinformation and end up stealing government property during an insurrection at the U.S. Capitol.

“We had officers who died because of this,” Sullivan said. “I’m not saying you had anything to do with that but the mob mentality created these circumstances that resulted in people losing their lives.”

Sullivan, a Bill Clinton appointee, said that far from being discouraged by the blaring alarms and physical altercations going on around him, Thompson celebrated breaching the building.

“When you get in, you’re gleeful, you’re happy,” the judge said. “You’re saying things that [encourage] other people to believe that what they are doing is righteous.”

Sullivan grew particularly irate when he recalled Thompson’s testimony about the coat rack.

“What are you going to do with a coat rack?” the judge asked, rhetorically. “I guess, like you said, it was a trophy. And then you come into this courtroom and you lie. You get on the stand and you lie.”

“You must think that those 12 people sitting over in that jury were fools, to think that you could convince them that you took this coat rack and the reason you took that coat rack was to keep it from being used as a weapon against the cops,” Sullivan said. “How did you think anybody would believe that?”

“I don’t,” Thompson replied, adding that “contributing factors,” such as being laid off and abusing alcohol, led to him joining the riot that day.

Sullivan said that the danger of what happened on Jan. 6 cannot be overstated.

“I’m not unsympathetic to people being radicalized to engage in abhorrent behavior,” the judge said. “We saw it happen in Nazi Germany. A very intelligent, educated population was able to be swayed to participate in atrocities in Nazi Germany by a demagogue.”

“It seems to me that you bought into that same mentality,” Sullivan said to Thompson, later adding: “I find that utterly scary that we still have millions of people in this country who are still buying a lie that’s not based on anything other than someone who’s unhappy because they didn’t get what they want.”

Sullivan also said he didn’t entirely buy Thompson’s post-trial “change of heart,” noting that other Jan. 6 offenders have pleaded guilty to offenses only to publicly say they did so in order to get a lighter sentence.

“I don’t know if you’re running a game on me or not,” the judge said.

Ultimately, Sullivan opted for a sentence considerably lower than what the prosecution had wanted, but he did not hold back his disdain for the actions of the defendant and the hundreds of others who stormed the Capitol.

Thompson’s co-defendant Lyon pleaded guilty in March to two misdemeanors: theft of government property and disorderly and disruptive conduct in a restricted building or grounds. He was sentenced in September to 40 days in jail, one year of supervised release, a $1,000 fine, and $2,000 restitution.