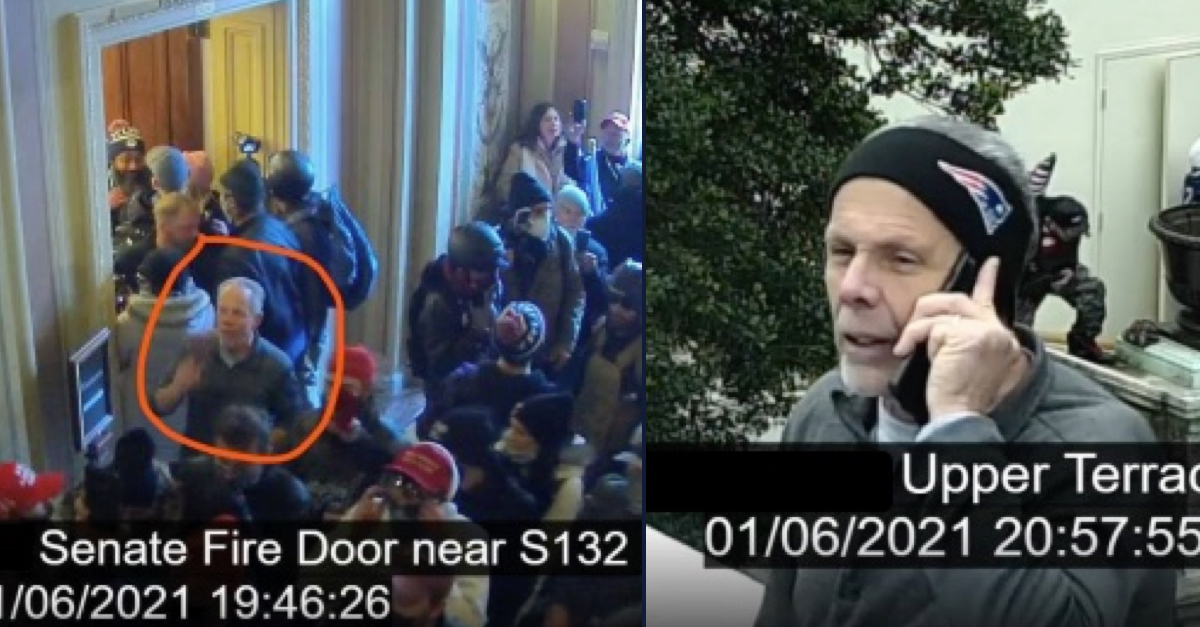 Paul Colbath inside and outside the Capitol on Jan. 6 (via court filings).

A South Carolina man who texted his wife that the scene outside the U.S. Capitol on Jan. 6 was “wild” and that he saw “tear gas” being deployed before entering the building has been sentenced to probation.

Paul Colbath, 65, will spend three years on probation, including 30 days of home detention, although he will be allowed to leave his house for work and other essential functions. U.S. District Judge Randolph Moss also ordered Colbath to complete 60 hours of community service.

Colbath admitted that he travelled from South Carolina to Washington on Jan. 6 to attend Donald Trump‘s so-called “Stop the Steal” rally, and joined the crowd on its march to the Capitol.

Once there, he saw rioters climbing the scaffolding outside the building and police using chemical spray in an attempt to control the crowd.

Undeterred by law enforcement’s obvious attempts to protect the building from the crowd of Trump supporters, Colbath proceeded to the Capitol. Although he was not accused of engaging in violence or destruction of property, he was ultimately part of the mob that successfully breached the building, forcing the evacuation of lawmakers and temporarily stopping Congress’ certification of Joe Biden‘s win in the 2020 presidential election.

Colbath was in the crowd that pushed inside the Senate Fire Door after someone yelled “Go!” and pushed forward toward the building. Once inside, he helped a man who had been hit with chemical spray into a nearby room to get some air. While in that room, prosecutors say, Colbath saw signs of vandalism and a broken window, but he continued deeper into the building.

He briefly exited the same door through which he had entered, but then went back in around 30 seconds later, staying inside for around six minutes.

He pleaded guilty in January to one count of parading, demonstrating, or picketing inside the Capitol building, a misdemeanor punishable by up to six months in jail. Under the plea deal, Colbath will pay $500 in restitution for the estimated $1.5 million in damage to the Capitol.

At his sentencing hearing on Wednesday, Colbath told Moss that he regrets his actions that day.

“I did something I never thought I would do,” Colbath said. “It will never happen again … I did what I shouldn’t have done. I’m 100 percent responsible for my actions.”

Moss, a Barack Obama appointee, said that although Colbath’s actions were on the “less culpable side” of those who participated in the Jan. 6 attack on the Capitol, his role in the riot was “not entirely passive.”

Colbath “knew that there was tear gas,” Moss said, adding that Colbath had seen police use tear gas and knew that law enforcement was “desperately trying to get people out of the building.”

Moss said that it was crucial that Americans not become “desensitized” to the fact that an angry mob nearly brought the government to a standstill during a crucial moment.