‘Smoke Out the Capitol, Baby’: Long Island Man Who Lit Up in the Capitol Rotunda on Jan. 6 Pleads Guilty 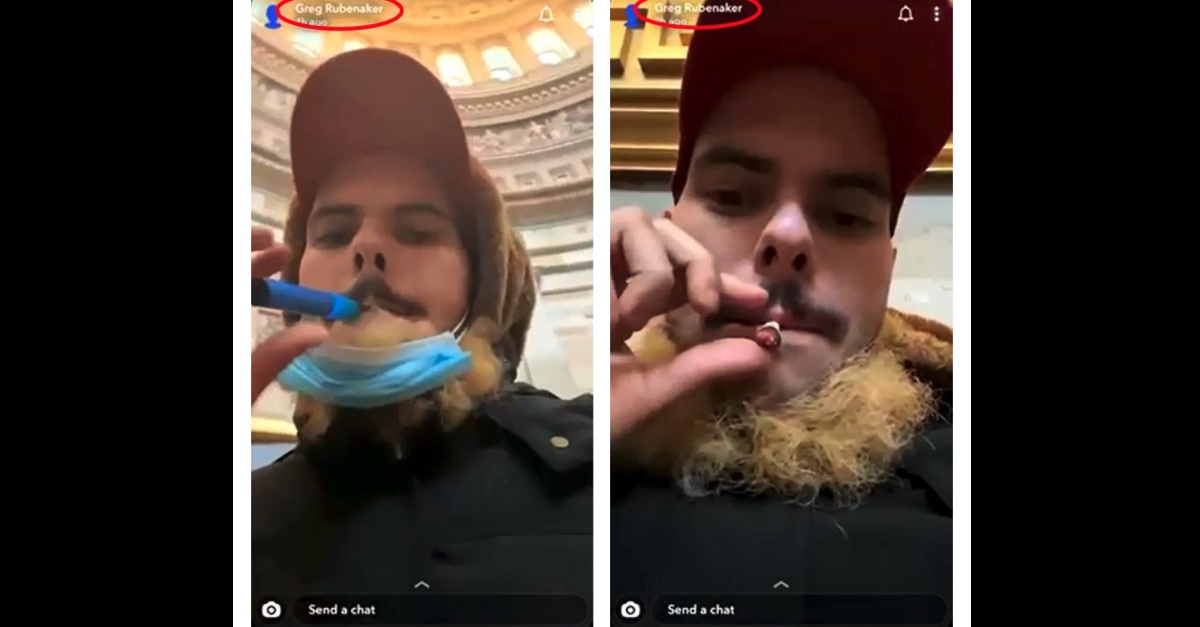 Greg Rubenacker appears to smoke marijuana inside the Capitol on Jan. 6. (Images via FBI court filings.)

A New York man who recorded himself smoking what appeared to be marijuana inside the Capitol Rotunda after having breached the building on Jan. 6, 2021, has pleaded guilty to ten charges.

Greg Rubenacker, 26, appeared before Chief U.S. District Judge Beryl Howell on Friday and pleaded guilty to all ten counts against him.  Three are felonies; seven are misdemeanors. The list includes a guilty plea to a federal obstruction charge that carries a potential 20-year prison sentence.

At Friday’s plea agreement hearing, Rubenacker admitted that he entered the U.S. Capitol while knowing he wasn’t allowed to be there. He also admitted to swinging a plastic bottle at a cop and spraying water on multiple police officers who were trying to regain control of the crowd of Donald Trump supporters that had breached the building to stop Congress from certifying Joe Biden‘s win in the 2020 presidential election.

Unlike the vast majority of guilty pleas in Jan. 6 cases, Rubenacker did not plead guilty pursuant to an agreement with the government. Assistant U.S. Attorney Laura Hill told Howell that prosecutors offered Rubenacker the chance to plead guilty to two felonies — obstruction of an official proceeding of congress and assaulting, resisting, or impeding officers — in exchange to dropping the rest of the charges.

“The potential exposure is no different,” Matera said at the hearing. “It was our position we’d be able to preserve that right and argue at the the time of sentencing.”

Under the government’s calculations, Rubenacker’s estimated sentencing guideline range would range from 41 to 51 months’ imprisonment and a fine from $15,000 to $150,000, according to court filings.

As Howell noted in Friday’s hearing, Rubenacker proposed a sentencing guideline range of 15 to 21 months in prison and a lower fine.

By pleading guilty to the indictment, rather than pursuant to a plea deal, Rubenacker also retains his right to appeal, which he otherwise would have waived.

At Friday’s hearing, Howell, a Barack Obama appointee, went through the timeline of Rubenacker’s actions on Jan. 6, ensuring at every step that he agreed with the allegations against him.

Before entering the Capitol, Rubenacker had attended Trump’s so-called “Stop the Steal” rally and posted a video of the crowd to Snapchat, which he captioned “America is pissed.”

He made his way to the Capitol and ultimately entered through the Senate Wing Door, which by that time had been broken open by other rioters. He then recorded multiple videos, including one of himself walking with others through a hallway in which Rubenacker could be heard saying “Holy shit! This is history! We took the Capitol!”

Rubenacker then joined a crowd of Trump supporters that had approached a police officer who was guarding a flight of stairs. That officer was telling the crowd to leave the building, but it didn’t; instead, Rubenacker and others chased the officer up the stairs and ultimately followed him into the Ohio Clock Corridor. There, the crowed got into a shouting match with the officer they had chased and other officers who were in the room.

Rubenacker left the building then but re-entered around 20 minutes later through the Rotunda doors. Once inside the Rotunda, Rubenacker recorded himself smoking what appeared to be marijuana. He posted the video to Snapchat with the caption “Smoke out the Capitol, baby.”

During the hearing, Rubenacker told Howell that he wasn’t sure if it was marijuana that he was smoking or whether the substance was CBD. He said that he didn’t bring marijuana into the Capitol but rather indicated that someone else inside the building had offered some to him.

Moments later, Rubenacker swung a plastic bottle at an officer’s head. He then sprayed water from his bottle at multiple police officers who were engaging with the crowd. Officers then sprayed the crowd with pepper spray, and Rubenacker started to leave.