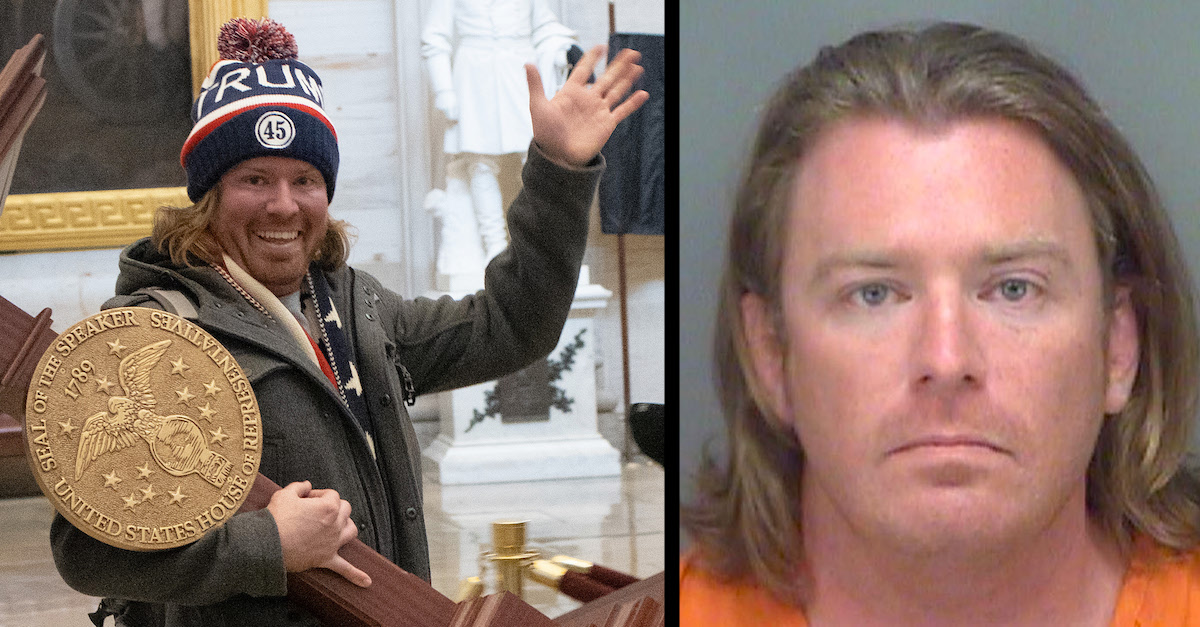 Adam Johnson appears in a photo taken by a news photographer inside the capitol on Jan. 6, 2021. At right is his subsequent mugshot.

The Florida man photographed smiling at a news photographer’s camera while carrying House Speaker Nancy Pelosi’s podium through the U.S. Capitol on Jan. 6, 2021, is seeking a sentence of time served, probation, and community service.  Federal prosecutors countered with a dueling request for 90 days behind bars.

Adam Johnson pleaded guilty on Nov. 22, 2021, to entering and remaining in a restricted building without lawful authority.

Johnson, then 36, of Parrish, Fla., was identified by his own social media connections after a Getty Images photographer captured his image during the early stages of the breach. Johnson’s photo was one of the first disseminated on Jan. 6, making him one of the noticeable faces of the deadly and destructive pro-Trump siege.

A statement of facts filed in connection with Johnson’s plea says Johnson traveled to Washington, D.C., from Florida to attend Donald Trump’s scheduled political rally. According to that statement, Johnson carried a knife that he discarded near the Canadian embassy before heading to — and entering — the capitol.

The statement of facts continues:

The statement says Johnson witnessed police in “shields and riot gear” using “tear gas and flash bangs” and other violence between the police and protesters. Johnson, per the statement of facts, recorded “video of an individual grabbing a baton from a police officer.” Johnson was hit with some of the tear gas and said it “was rough.”

Johnson climbed scaffolding, recorded another video, and sent it to Facebook friends. He climbed down and ultimately entered the Senate Wing door, the statement of facts continued. He attempted to locate Pelosi’s office but a door was locked; her staffers had barricaded themselves in another office nearby, according to the statement of facts. 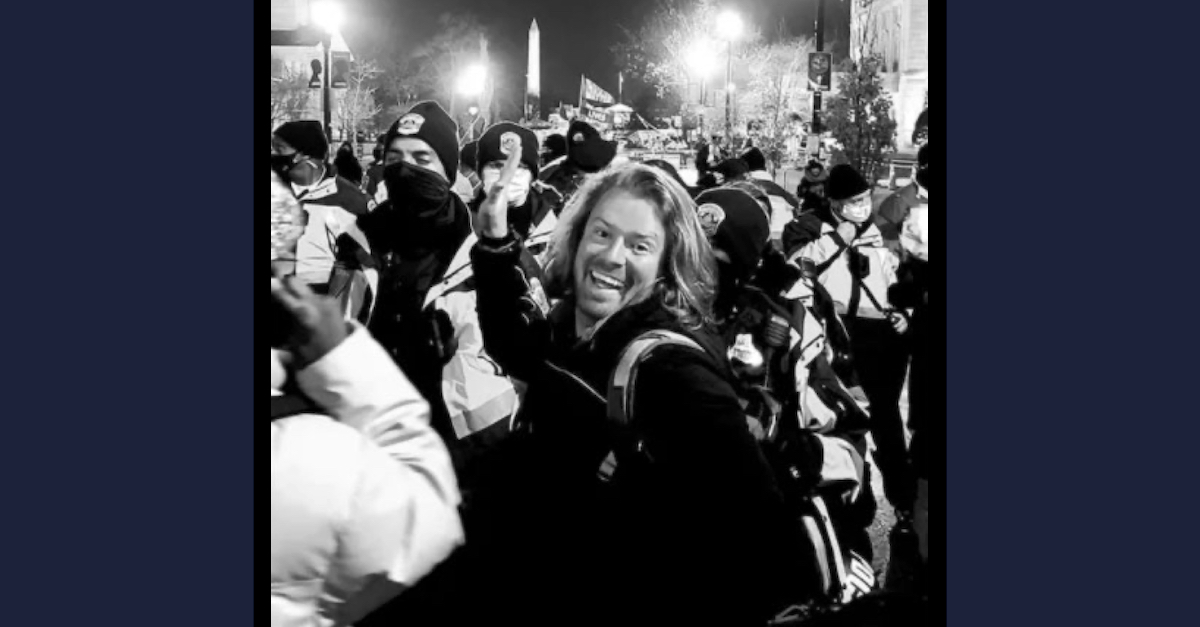 Federal prosecutors embedded this photo from Adam Johnson’s social media feeds in a sentencing memorandum. Its original caption was this: “Riot!!!” (Image via federal court documents.)

Johnson posed for photos with a few signs inside the capitol complex and ultimately came across Pelosi’s podium. The statement of facts continues at length to describe the now-infamous photo of Johnson:

At approximately 2:30 p.m., upon entering the Rotunda with the podium, JOHNSON waved to a photographer with professional camera equipment, who ran up to take a picture of him. JOHNSON set the podium down in the center of the Rotunda, where he posed while yet another photographer with professional camera equipment took pictures of him. JOHNSON then asked a woman to take pictures of him standing behind the podium using his phone. The woman took several pictures of JOHNSON behind the podium while he gestured and pretended to make a speech. JOHNSON left the podium in the center of the room and exited the Rotunda.

Johnson’s attorneys on Friday asked a judge to sentence the admitted criminal to “a sentence of time served followed by a term of probation of 12 months, $500 restitution and 100 hours of community service.” 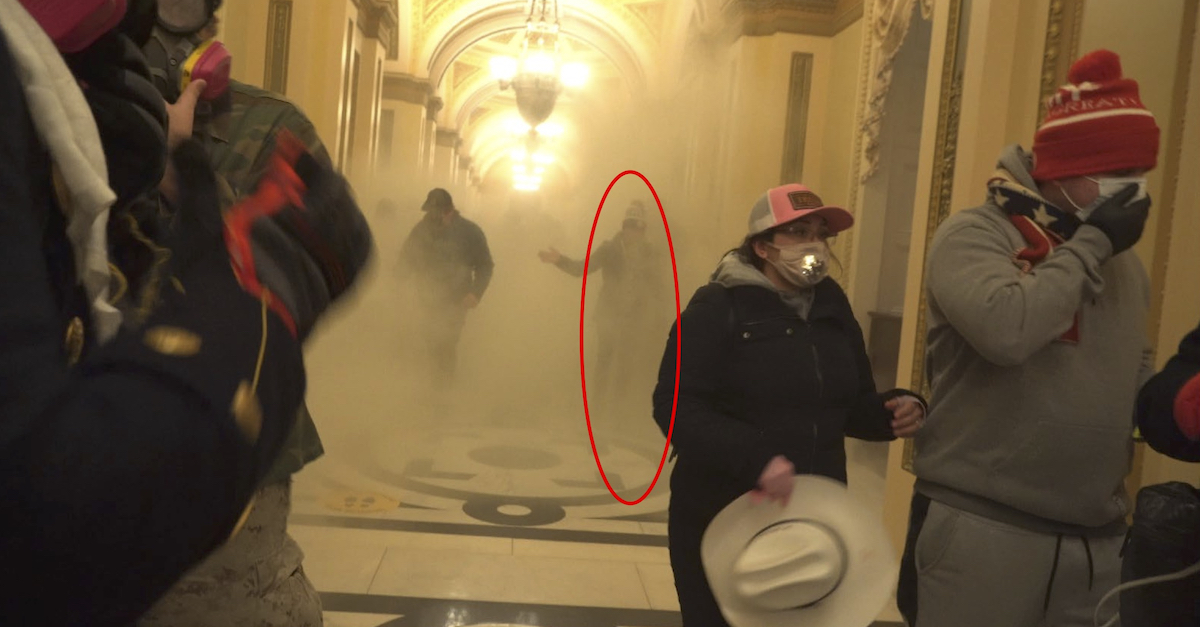 Johnson was arrested on Jan. 8, 2021, just two days after the siege and after he returned home to Florida. He was released from jail on Jan. 11, 2021, the defense sentencing memorandum indicates. He has “been on pre-trial supervision in the Middle District of Florida” since then.

The defense says his presumptive sentence is zero to six months behind bars based on the severity of the crime to which he pleaded guilty and relevant federal sentencing guidelines.

Any term of probation “should not be more than three (3) years,” the defense continued.

After bemoaning the “viral” nature of the photograph of Johnson and the fact that Johnson was only in the capitol for “about 30 minutes,” the defense argued as follows:

He’s spent the past year or so on pre-trial release, with plenty of time to contemplate his actions. As he stands before the Court today, he deeply regrets his participation in the breach of the U.S. Capitol on January 6, 2021. The damage and violence inflicted on that date by others is contrary to everything he believes in. He has no history of violence and does not condone it. While his actions on January 6, 2021 did not involve the destruction of government property or physical violence against law enforcement, he understands that his entry in the U.S. Capitol, at times yelling and screaming, exacerbated a terrible situation.

Adams’ [sic] actions inside the Capitol on January 6th are detailed in the Statement of Facts and the PSR [Pre-Sentence Report]. What has not been made public is that almost immediately after he was contacted by the FBI,he self- surrendered, accepted personal responsibility for his actions. He gave FBI agents a detailed account of his travel to and from Washington, D.C., retracing each step he took inside the Capitol. He also admitted to the authenticity of photographs and videos of him inside the Capitol. He provided his cell phone to the FBI and admitted that he attempted to delete images and social media posts on January 6th and 7th . Furthermore, he provided the FBI with passwords and log-in information to all of his social media accounts. During a subsequent interview he reviewed maps of the Capitol and video footage from January 6. Later, he relinquished a disassembled and inoperable rifle in his possession. After prosecutors had adequate time to evaluate Adam’s conduct and cooperation, they decided not to proceed with felony charges and instead charged him with a misdemeanor pursuant to a plea agreement.

Johnson’s attorneys then noted a series of letters of support and extolled his virtues as a father:

Adam Johnson is a devoted husband and father of five boys, ages 14, 13, 12, 9 and 6. He is happily married to his spouse, who is a medical doctor. While his wife practices medicine, Adam serves as the primary caregiver for the children. He prepares the boys’ meals, gets them ready for school, transports them to and from school and extra-curricular events, and helps them with their homework each night.

An interesting footnote in the sentencing memorandum suggests Johnson may have wished to turn his notoriety into a fundraising efforts for his own personal causes:

Right or wrong, Adam has received significant attention from the media. To ensure that he does not profit from his actions on January 6, 2021, Adam has agreed to turnover to the United States any compensation he receives for writing or speaking about the incident. Adam suggested donating the profits to a charity like the Wounded Warriors or Tunnel to Towers but the idea was unworkable.

Elsewhere, the document says Johnson “declined numerous invitations for personal appearance[s]” to focus on family matters. It also says Johnson’s family received death threats, his wife’s medical practice “suffered financially,” and that longtime friends “will no longer speak to him or his family.” It further argues that Johnson shoulders a “[l]esser [d]egree of [c]ulpability than [o]thers.”

“Unfortunately, he received considerable attention simply because the lectern belonged to Speaker of the House, Nancy Pelosi,” the defense document suggests. “Arguably, if he latched onto some other piece of government furniture for his photo opportunity jail time would not even be a consideration.”

Federal prosecutors wrote otherwise.  They’re asking for 90 days in jail, one year of supervised release, a $5,000 fine, $500 in restitution, and 60 hours of community service. 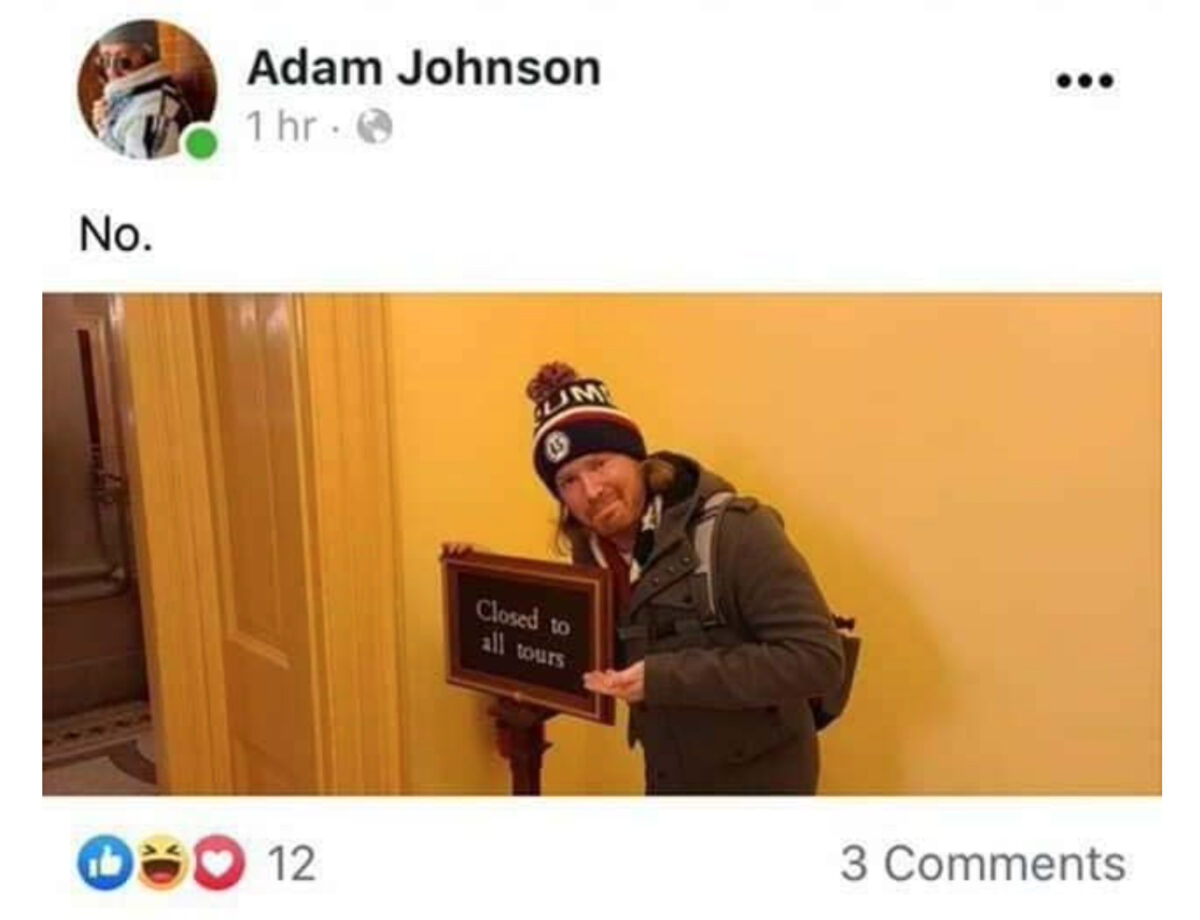 While noting that Johnson ultimately accepted responsibility for his actions and “did not personally engage in violence during the riot,” prosecutors argued that “Johnson encouraged his fellow rioters to engage in property destruction and was part of a mob that pushed its way past Capitol police officers to get closer to the House Chamber.”

“As with scores of other defendants, Johnson’s conduct on January 6th took place within the context of a violent riot that relied on numbers to overwhelm law enforcement, breach the Capitol, and disrupt congressional proceedings integral to the peaceful transfer of power,” prosecutors continued. “But for his actions alongside so many others, the breach of the Capitol likely would never have happened.”

“In light of Johnson’s participation in a riot that succeeded in halting the certification of the 2020 election, his encouragement of violent conduct, his attempt to enter the Speaker’s office, and the need to deter future political violence, a jail sentence is both necessary and appropriate in this case,” they concluded.

Read both the defense and the prosecution sentencing memorandums below.