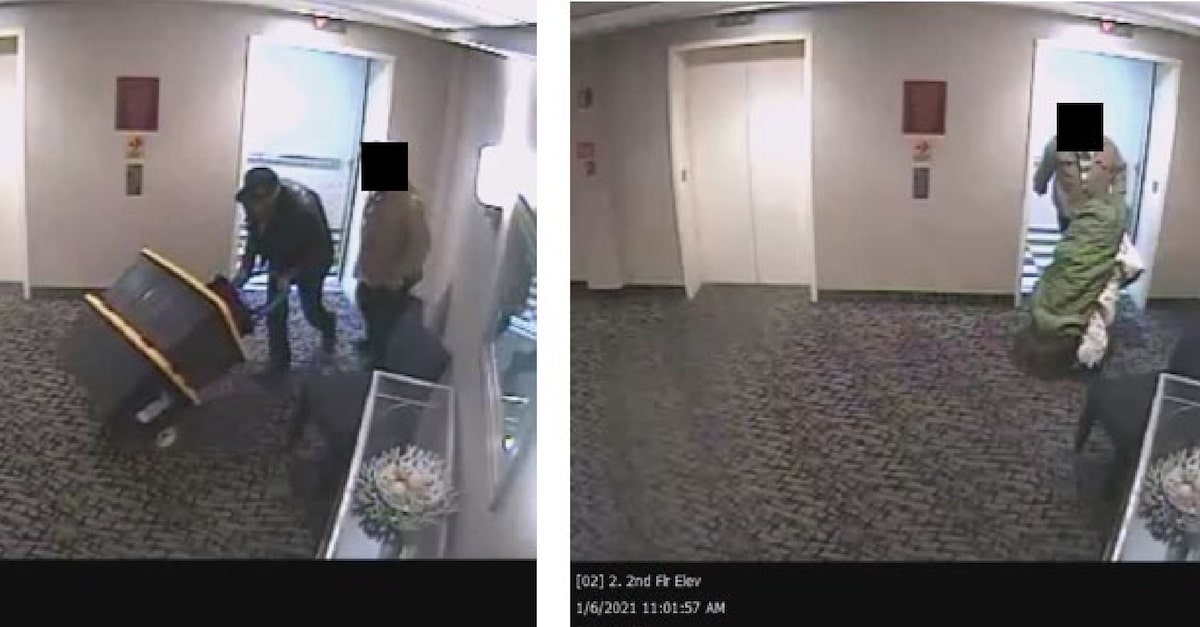 Prosecutors say that Edward Vallejo (left), charged in the Oath Keepers seditious conspiracy case, was part of the so-called quick reaction force (QRF) that stood ready to ferry weapons across the Potomac to the U.S. Capitol on Jan. 6. These photos, from the government’s memo seeking his detention, show him and another QRF memo allegedly hauling weapons in the Comfort Inn Ballston.

A member of the Oath Keepers charged in the same seditious conspiracy indictment as the extremist group’s leader Stewart Rhodes must stay behind bars pending trial, a federal judge ruled on Thursday.

“This was a very strong threat to our nation,” U.S. Magistrate Judge John Z. Boyle said, referring to the Jan. 6 attack on the U.S. Capitol.

“There is compelling evidence about your potential for danger,” Boyle added.

Edward Vallejo, a 63-year-old resident of Phoenix, Arizona, was quoted speaking about discussing the possibility of “armed conflict” and “guerilla war,” in the sprawling 11-person indictment first unsealed last week.

Prosecutors expanded upon those quotations in a memo seeking Vallejo’s detention.

Vallejo’s public defender Debbie Jang cited her client’s age as a reason he should not be held in pretrial detention, but prosecutors rejected that argument.

“The government acknowledges that the defendant is not a young man, but he is a dangerous man,” Justice Department attorney Louis Manzo said in court.

Prosecutors say that Vallejo traveled across the country with an “arsenal” of weapons for a so-called quick reaction force, or QRF.

The alleged Oath Keepers plot to ferry heavy weapons across the Potomac River on a boat first surfaced last year, initially in reporting by the New York Times and then in court papers. The indictment expanded on those allegations, placing him among the group that brought weapons to the Comfort Inn Ballston, just outside of D.C.

The so-called QRF allegedly stood ready to deploy by boat over the Potomac River at former President Donald Trump’s direction. Rhodes allegedly signed off on the plan for a so-called “QRF”—which was never actually launched.

“We WILL have a QRF, this situation calls for it,” Rhodes commanded in an encrypted message, according to the indictment.

Vallejo’s detention memo spoke at length of these plans.

“Heavily armed QRF teams would be minutes away, just outside the Capitol, ready to support those on the ground,” the memo states. “All contingency plans were considered. The conspirators even sought to ferry lethal weapons from Virginia by boat into the Capitol, if the bridges were closed.”

“You Are a Serious Danger”

“If Mr. Rhodes had given that order, you would have complied,” the judge said, adding: “Therefore, you are a serious danger at this time.”

Prosecutors said that Vallejo sent an encrypted message on Signal calling “drone with a 720p cam for recon use,” using the shorthand for the military term reconnaissance, gathering information about the area.

Vallejo’s defense attorney depicted the allegations as out of character for her client, whom she depicted as a person eager to lend a hand to fellow military veterans and Alcoholics Anonymous members.

“He does not have a criminal history, and there is nothing in his past that indicates violence or violent behavior,” Jang claimed.

The government believes that his danger to the community is ongoing, citing his retweet of a message playing down the Jan. 6 attack on the U.S. Capitol.

“There was NO INSURRECTION on J6 just a peaceful protest,” the tweet said, according to prosecutors.

“I HAVE NEWS FOR YOU … you will NEVER achieve ‘vaccine equality’ as long as I, and others like me, are alive! … I will DIE first,” he allegedly tweeted in December 2021. “And that’s only when I run out of AMMUNITION!”