No Jail Time for Former Corrections Officer and Friend Who Together Breached the U.S. Capitol on Jan. 6 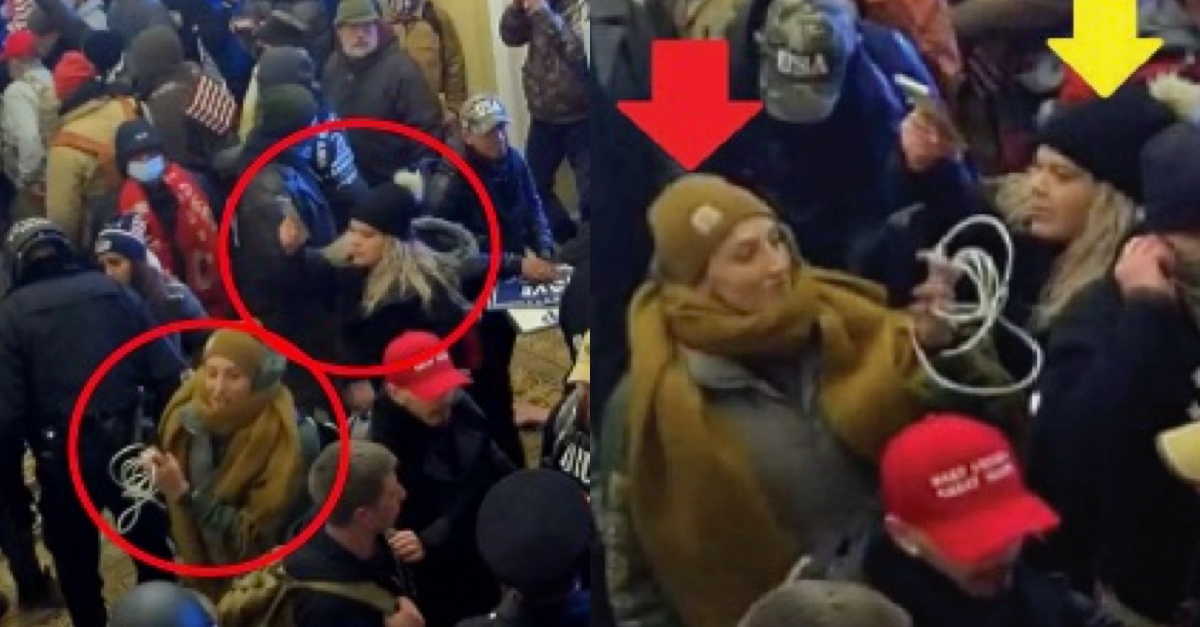 Marissa Suarez, in the matching brown hat and scarf, and Patricia Todisco, in the darker hat, are seen inside the U.S. Capitol on Jan. 6 (images via FBI court filing).

A New Jersey woman who was working as a corrections officer when she and a friend breached the U.S. Capitol on Jan. 6 will not spend any time behind bars.

Marissa Suarez, 33, and Patricia Todisco, also 33, were among the thousands of Donald Trump supporters who descended on the Capitol that day, angry over Joe Biden‘s win in the 2020 presidential election.

Suarez was a corrections officer with the Monmouth County (New Jersey) Corrections Facility at the time. According to prosecutors, she had requested an “emergency holiday” to attend Trump’s so-called “Stop the Steal” rally and drove to Washington that day, after picking up Todisco in New York.

The two women are seen on surveillance footage entering the building through the Senate Wing Doors almost an hour after the initial breach. They went on to spend around a half-hour inside the building, traveling to the Crypt and taking pictures and videos of celebrating rioters and chanting “Our house!”

The two separated after leaving the Crypt. Todisco was later seen entering the office of Sen. Jeff Merkley (D-Ore.), although she is not accused of participating in the damage that was wrought there.

Todisco pleaded guilty in January to a single charge of parading, demonstrating, or picketing in a Capitol building, a misdemeanor punishable by up to six months in jail and a fine up to $5,000. Suarez pleaded guilty to the same charge in April.

At the hearing, Assistant U.S. Attorney Graciela Rodriguez Lindberg said that the women deserved at least some jail time because, while they weren’t accused of engaging in physical violence or property destruction, they were enthusiastic members of the mob.

Lindberg said that Suarez in particular should have known better.

U.S. District Judge Dabney Friedrich interrupted Lindberg to ask why prosecutors hadn’t asked that a fine be part of the punishment, noting that the cost of the government’s expansive pursuit of Jan. 6 offenders must be considerably high.

“Why isn’t the government seeking a fine?” Friedrich asked. Lindberg noted that both defendants are required to pay $500 in restitution for the estimated $2.7 million in damage to the Capitol — a standard condition of a majority of Jan. 6 plea deals so far — and that the government felt that community service would have a stronger deterrent effect.

“I’m just curious,” she said. “The government doesn’t seem to be seeking that where it could, and I don’t understand that given the cost of these investigations and the cost to the Capitol.”

In speaking on behalf of his client, Suarez’s lawyer, Rocco Cipparone, referred to what he described as the “punitive collateral consequences” that Suarez has faced, including being fired from her job as a corrections officer.

“It’s unlikely she’ll ever be able to work in law enforcement again,” Cipparone said, noting that the job had been his client’s “dream” since 2010 and had only started working as a corrections officer in 2019. She has since found a job in sales for a local business.

As Suarez’s sentencing memo also noted, her marriage ended in November 2021, “as a result of her husband (per Ms. Suarez’s understanding) having turned her in to the FBI” for entering the Capitol building.

Both defendants spoke on their own behalf.

“I just want to say how sorry I am,” Suarez said, her voice occasionally halting as she fought back sobs. “I know what I did was wrong, and I think everything that has happened so far is a huge deterrent. I am not a threat [to] any society.”

“I’m not violent,” she added. “I’ve done everything I’m supposed to do my entire life. I’ve done right by everybody and everything. This was a huge hiccup that will never leave me, unfortunately. If I could pay a fine and make everything go away I would[.]”

Todisco, an emergency room nurse, was similarly emotional when she addressed Friedrich.

“I just wanted to express again that I’m very remorseful, and like Ms. Suarez had said, this is just one hiccup that’s never going to leave me,” Todisco said, her voice shaking and tearful. “It’s taken a toll mentally, and I’ve actually [been to] counseling as well to talk through this and become a better person, even though this does not reflect on me as a human being.”

Friedrich, who has previously said that she does not believe she is legally allowed to impose so-called “split sentences” of both jail time and probation for the picketing and parading offense, maintained that position on Tuesday. The judge noted that although prosecutors requested an imposition of jail time as a condition of probation, she didn’t feel that such a sentence — which would likely be served intermittently, at nights or on weekends — was safe during the ongoing coronavirus pandemic.

Friedrich also didn’t seem to believe that jail time was the right punishment.

“Both have been remorseful to this day,” Friedrich said. “I do believe their remorse is genuine.

“Ms. Suarez, Ms. Todisco, I wish you luck,” Friedrich said after issuing her sentence. “You don’t have to be defined by this mistake, and I’m confident and hopeful that I will not see you again.”