Maryland Man Who Hit a Police Officer with a Confederate Flag on Jan. 6 Pleads Guilty to Felony 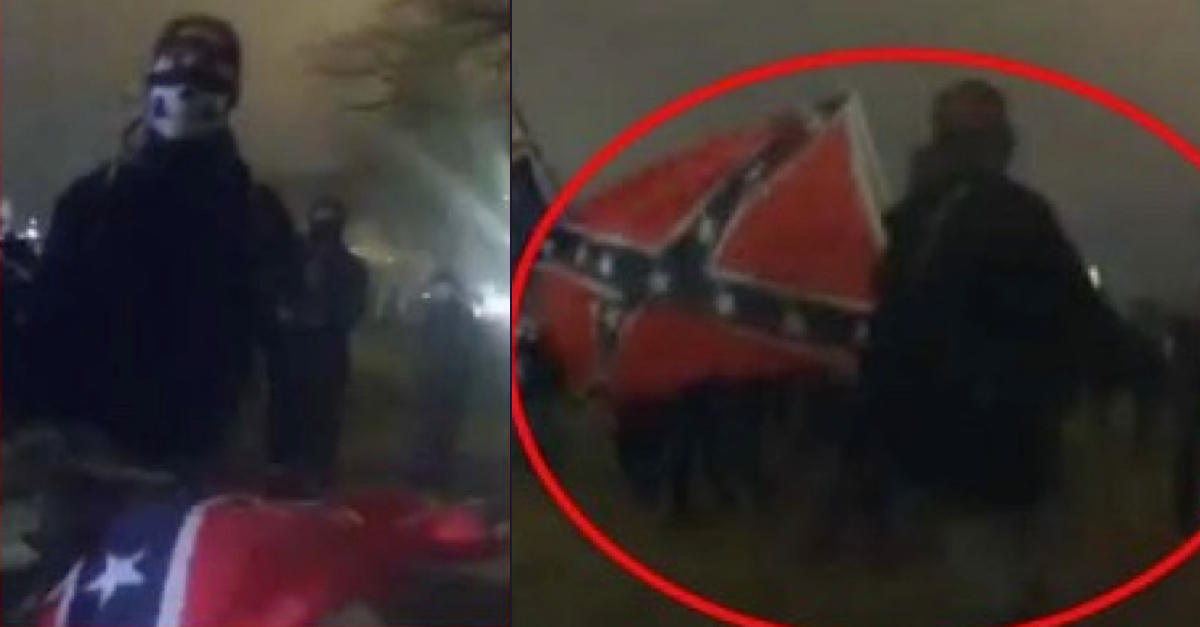 David Blair carries a Confederate flag during a confrontation with a police officer at the Capitol on Jan. 6 (image via FBI court filing)

A Maryland man who hit a police officer with a makeshift Confederate flag outside the U.S. Capitol on Jan. 6 has pleaded guilty to a felony.

David Blair, 27, admitted Monday that on the evening of Jan. 6, as law enforcement was trying to push the crowd of Donald Trump supporters back from Capitol grounds, he struck a Metropolitan Police officer with a lacrosse stick to which he had attached a Confederate flag.

Blair had positioned himself between a line of police officers and a crowd on the West Lawn of the U.S. Capitol grounds. He acknowledged that at the time, he said words “to the effect of, ‘hell naw, quit packing up, don’t be scared, we’re Americans, don’t be scared, let’s go quit backing up, quit being scared,'” according to the statement of offense filed in connection with Blair’s plea.

As officers advanced toward Blair and the crowd, an officer identified only as “K.P.” in the pleadings pushed Blair using his baton.

Blair responded by “squaring up his body” to stand in front of the office.

“What’s up motherfucker, what’s up, what’s up bitch?” Blair said to K.P., according to the filing. He then thrust the stick with the Confederate flag attached toward the officer, striking him in the chest.

Several officers immediately restrained Blair on the ground, the statement of offense said. He was then arrested and taken to an area of the grounds closer to the Capitol for processing.

At that point, Blair apparently started talking, despite not being asked any questions.

“While in handcuffs and not in response to any questions prompted by any members of MPD, defendant Blair stated words to the effect of, ‘I understand, what I did, the one motherfucker swung at me so I kinda switched … so I apologize, we’re done though,'” the statement of offense said.

Police were not, in fact, done. They searched his bag and found a silver knife.

Blair told police that he had the knife “because I was worried about Antifa and other people trying to jump me.”

Officers also recovered tape from the bag, which Blair acknowledged “looks damn suspicious” at the time.

“I had a flag with me, I taped it,” Blair told police.

FBI Director Christopher Wray has said that there is no evidence that “Antifa” adherents participated in the attack.

The altercation happened at around 5:45 p.m., hours after the Capitol had been initially breached and the mob of Trump supporters had successfully stopped Congress from certifying Joe Biden‘s win in the 2020 presidential election.

Blair pleaded guilty to interfering with law enforcement during a civil disorder, a felony punishable by up to five years in prison and a $250,000 fine.

Before the plea, Blair was facing nine charges, including several misdemeanors and a felony obstruction charge punishable by up to 20 years in prison. The remaining charges will presumably be dismissed when Blair is sentenced.