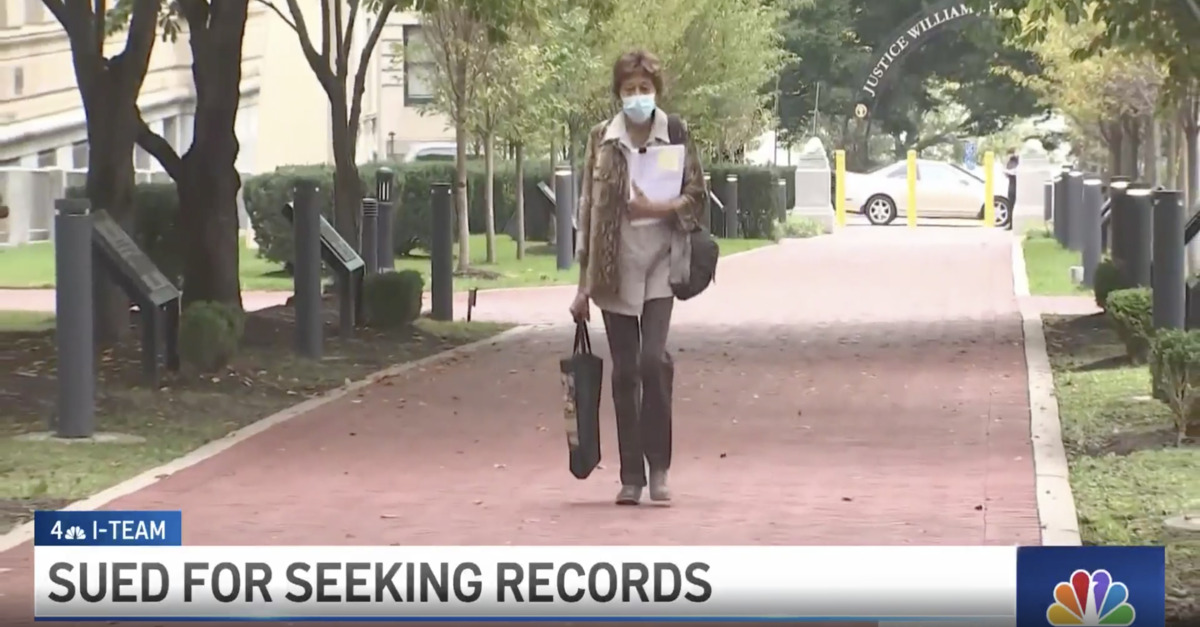 A New Jersey township is suing an 82-year-old resident for asking too many questions a few too many times. But now, officials are scrambling to find a solution that doesn’t involve the court system.

A prominent local citizen of Irvington, N.J., political opponent of the mayor, and now a defendant in a lawsuit filed by the municipality, Elouise McDaniel has made over 75 different public information requests over the past three years under the auspices of the Garden State’s Open Public Records Act.

According to the lawsuit obtained by WNBC, she is being accused of harassment and defamation due to those requests and because she allegedly filed “frivolous” complaints about Irvington Mayor Tony Vauss with various state agencies. The filing alleges those complaints were made “with the sole purpose and intent to harass, abuse and harm Plaintiffs and employees of the Township, including its Mayor.”

According to NJ.com, the lawsuit claims that efforts to respond to McDaniel’s “voluminous OPRA requests has been unduly burdensome, time consuming and expensive.”

The complaint goes on to allege:

As a direct and proximate result of [McDaniel’s] abusive conduct, [Irvington has] been forced to incur unnecessary legal fees for services rendered to defend against and respond to plaintiff’s claims and requests and were also forced to incur loss of municipal personnel time and related expenses…

The mayor, for his part, insists he’s not behind the litigation.

“I did not file the lawsuit against Elouise McDaniel,” Vauss told the Manhattan TV station. “Harold Wiener is the plaintiff.”

Irvington Municipal Clerk Harold Wiener, however, also disputes having any direct role in the lawsuit against the retired teacher.

“I haven’t requested a lawsuit against Elouise McDaniel,” he told WNBC. “She does file a lot of OPRAs. That comes with the territory, my territory. I know Ms. McDaniel. I don’t have a problem with her.”

But someone in local government apparently does.

And those official denials later turned into a state of keeping mum.

“The complaint speaks for itself,” Irvington Township Attorney Ramon Rivera told WNBC. “I do not comment on active litigation.”

“The township does not comment or discuss pending litigation,” Weiner told NJ.com after the story broke.

Law&Crime reached out to Mayor Vauss. In a brief interview he was reticent to discuss the filing, generally lamented the situation, and expressed skepticism over some of the denials over where the lawsuit originated.

“I cannot speak for him,” the mayor said, referring to the municipal clerk denying responsibility, “but I’m not sure that’s the case.”

“The filing speaks for itself,” Vauss told Law&Crime, while seeking to contrast Irvington’s lawsuit with a similar New Jersey case that resulted in Teaneck having to pay a resident nearly $20,000 after suing him for making 300 OPRA requests in just two months.

Vauss insisted the lawsuit was based on McDaniel filing numerous duplicative OPRA requests after already receiving replies from the municipality as well as an instance in which “she almost attacked [a] council person” and “had to plead guilty” to disturbing the peace.

McDaniel has disputed the circumstances and characterization of what led to that low-level offense, saying she was protesting an effort by the Township Council to silence her.

In response to the lawsuit, First Amendment attorneys have characterized the lawsuit as retaliatory and intended to stifle free speech. An attorney for Vauss and the township harshly disputed the criticism and shed some light on those previous official denials.

“To insinuate the Mayor is using public resources to stifle transparency is false,” Michael DeCotiss told WNBC. “Ms. McDaniels [sic] brought over 75 OPRA requests placing an undue burden on the Custodian of Records of the Township.”

Aside from the First Amendment implications, McDaniel is aghast at the treatment she’s received from her local government.

“I’m a homeowner,” she told WNBC. “I pay tax dollars. So I think I am entitled to know how my hard earned tax dollars are being spent.”

There are, notably, no provisions in New Jersey law that place any limit on the number of OPRA requests a person can file. Requests can be made by citizens, non-citizens and even anonymously.

“I think that in some ways [the lawsuit] is political,” McDaniel told NJ.com. “This has been going on for a long time and I’m just tired at this point. I’m tired, this is ridiculous. I want to live out my final years…in peace.”

“I think in most cases they just want the abuse to stop,” he said. “She does this as a political ploy.”

According to Vauss, a meeting has been scheduled for Friday, April, 1, 2022 “with all the parties involved” in an effort “to come up with a resolution for this” so that it doesn’t go to court.

Read the township’s complaint in full below:

Editor’s note: this article has been amended post-publication to include a copy of the lawsuit.