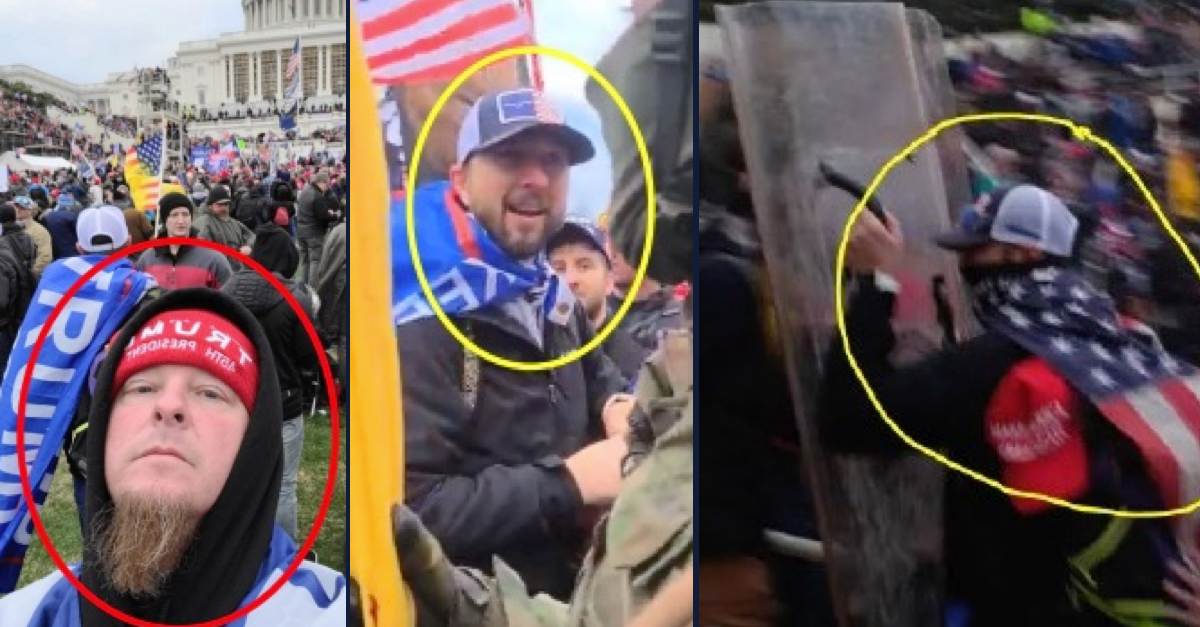 A lawyer for one of two brothers who have been detained since June for felonies they allegedly committed during the Jan. 6 riot at the U.S. Capitol compared his client to people who participated in protests following the murder of George Floyd. He said that Black Lives Matter protesters were “given a pass” and implied that his client is the subject of a politically motivated prosecution.

Adam Jackson, 42, and his brother Brian Scott Jackson, 47, both from Texas, were spotted among the crowd of Donald Trump supporters at the Capitol on Jan. 6. According to prosecutors, Adam Jackson faced off against police near an entry to the building, hurling an orange traffic cone at them before charging at them while holding a stolen police riot shield.

Prosecutors say that Adam Jackson’s social media posts and texts both before and after the Capitol attack indicate that he and his brother planned their trip to Washington, D.C., prepared for political violence — and may have planned to return.

“I’m gonna to my best to get there,” Adam Jackson allegedly texted an unidentified person who asked if the defendant was planning on returning to Washington for Joe Biden’s inauguration, according to complaint documents. “Working on it.”

The brothers were arrested in June and charged with civil disorder, assaulting, resisting, or impeding officers using a dangerous weapon, physical violence and disorderly conduct in a restricted building or grounds with a deadly or dangerous weapon, and committing an act of physical violence in the Capitol grounds or buildings. Both have been detained since their arrests.

At Monday’s hearing on Adam Jackson’s motion to be released from pretrial detention, his lawyer Joseph McBride said that the government has failed to show that his client was a danger to the community or a flight risk, noting that he is “a man who while living freely from January 7, 2021 – June 7, 2022, broke no laws and committed no crimes[.]”

In his pleading, McBride depicted federal prosecutors as all but foaming at the mouth in an effort to persecute the Trump supporters who stormed the Capitol building in anger over Biden’s win in the 2020 presidential election.

“The Government, in its lust to jail anyone who went to the Capitol on January 6, 2021, has turned a blind eye to the fact that Mr. Jackson is a husband, father, grandfather, business owner, employer, mentor, coach, churchgoer, and law-abiding citizen,” McBride argued in his pleading.

In its opposition to Adam Jackson’s request, prosecutors had cited the defendant’s criminal history, including: a 1997 incident in which he shot at someone with a rifle from the passenger seat of a car; arrests for “terroristic threats” in 2002 and 2004; arrests for nonviolent offenses in 2004 and 2006; and an arrest for causing bodily injury in 2009, although that last charge was dropped because the allegedly injured person couldn’t be found. The government noted, however that Adam Jackson’s prior criminal actions are “admittedly dated.”

At a bond hearing before U.S. District Judge Rudolph Contreras on Monday, McBride said that his client’s criminal history was a reflection of problems he had in his youth, and that in fact his interaction with the criminal justice system was “meaningful” and had set him on the right path going forward.

McBride claimed that his client’s constitutional rights are at stake, saying that he would be “remiss” if he didn’t speak about the “First Amendment implications” of the case against his client and noting that the riot “didn’t happen in a vacuum.”

“We are all citizens of this world,” he said, before referring to the protests that took place in the summer of 2020 and saying that “everybody who went to the Capitol” on Jan. 6 had those protests in mind.

“No matter how you feel about Jan. 6, or no matter how anybody feels about George Floyd and that situation, there is some commonality there,” McBride said.

The “situation” to which McBride was referring appears to be the murder of Floyd on May 29, 2020, while in police custody, when a Minneapolis police officer knelt on Floyd’s neck for more than nine minutes. Floyd’s death, which was caught on camera by bystanders, sparked protests and demonstrations nationwide.

“I’m referring to the fact that lots of people, when it came to the Black Lives Matter protests, participated in acts of violence, but they were largely given a pass,” McBride continued. “Why were the given a pass? Because society, the court system, the media recognizes that when those people left their front door, they left for political, constitutionally protected reasons.”

McBride said that demonstrators protesting Floyd’s murder while in police custody “poured out into the streets” in order to “redress their government for political grievances.”

“He went [to the Capitol] to protest what he saw as improper political results,” McBride said, adding that it didn’t matter if the results actually were improper, or whether the claims of widespread voter fraud were even true (they weren’t).

What matters, McBride said, was that Adam Jackson’s “intentions and thought process were politically grounded and therefore protected by the First Amendment.”

Contreras, a Barack Obama appointee, appeared to pump the brakes on McBride’s analogy.

“The one violent Black Lives Matter protester that came to me went to prison, so some arguments are going to resonate more than others,” the judge said.

According to federal prosecutors, some 300 people were charged in connection with the Black Lives Matter protests, which took place over several months in 2020; nearly 900 have been charged in the Jan. 6 attack.

According to McBride’s website, he has appeared on FOX News, Newsmax, One America News, and Steve Bannon’s War Room; in his own words, he was “featured in episode 3 of Tucker Carlson’s Patriot Purge,” a multi-episode series focused on Jan. 6 that has been widely criticized by conservative pundits and, allegedly, Fox hosts and executives. McBride has also appeared in more mainstream news sources, including CNN, The New York Times, and The Washington Post.