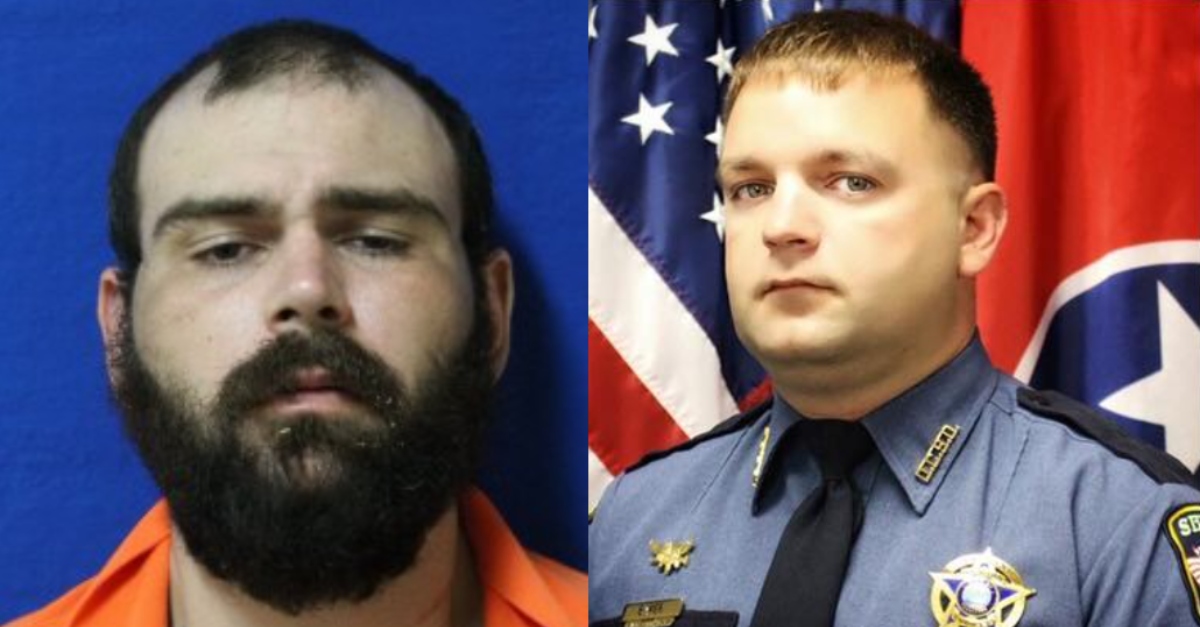 It took just under two hours of deliberations on Thursday for a jury to sentence Steven Wiggins, 34, to death for murdering Dickson County Sheriff’s Sgt. Daniel Scott Baker, 32, during a 2018 traffic stop.

After the verdict was read, there was a slight technical hiccup that led the judge to order jurors out of the courtroom to make sure that they indicated unanimous agreement upon each and every one of the elements of the aggravating factors that made this murder a capital crime. Jurors were instructed to make clear their intent with an asterisk and their initials. They did so in a matter of minutes.

Wiggins was convicted last Thursday, Aug. 5, after prosecutors said he shot the sergeant multiple times, stole the sheriff’s office vehicle, and burned the victim’s body with the vehicle.

Sgt. Baker was a husband, a father, and a Marine.

Wiggins killed Baker as the sergeant tried to get away, according to federal authorities in a case separate from the state trial.

#StevenWiggins – LISTEN: In the prosecution’s closing argument, they play, again, the body cam/dash cam footage from Sgt. Baker as Wiggins shoots him to death. Baker’s family crying in the gallery. @LawCrimeNetwork pic.twitter.com/Fqe8Gdk7y8

“After some additional discussion, Sgt. Baker then told WIGGINS to exit out the front passenger side door,” they wrote. “Sgt. Baker walked around the rear of the vehicle towards the front passenger side door, at which point WIGGINS opened fire with a .45 caliber pistol. Based on the body camera footage, WIGGINS initially fired approximately five shots, at least one of which struck Sgt. Baker as he attempted to get away from WIGGINS and get to cover.”

The penalty phase was a literal battle between life and death for Wiggins. His defense said that mitigating factors existed to justify a life sentence. This included: Wiggins suffering brain damage (a hole in his brain) from when he was in the womb and his father attacked his mother; his father abusing him in childhood; and, as described in testimony from former classmates, bullying from other kids. In other words, the defense tried to make the case that Wiggins caught a tough break in life and should be spared death.

The defense maintained Wiggins stayed out of trouble while incarcerated. (A jail administrator testified that Wiggins broke the rules by getting a tattoo while behind bars.) Defense lawyer David Hopkins maintained that life was the more appropriate sentence, while emphasizing that these did not excuse the crime Wiggins committed.

#StevenWiggins mother in the gallery. Her son now faces the possibly of the death penalty. The jury has heard testimony about sexual abuse her son suffered from his father/her husband. We’ll likely see her on the stand today. @LawCrimeNetwork pic.twitter.com/esJemtUxBu

But prosecutors worked to highlight a pattern of brutality and remorselessness throughout Wiggins’s life. Judge David Wolfe allowed tape of Wiggins’ young son telling him mom was pregnant.

Wiggins’ response: “Kick her in the stomach.”

#StevenWiggins – A deputy that transports Wiggins to & from court and watches him change into street clothes is testifying about these tattoos:
On Wiggins side: Aint Got No Time For That – Death Row – Hell bound.
On his back: Crush you Enemies. Show no Mercy. @LawCrimeNetwork pic.twitter.com/A9DeaWKSlt

The prosecution successfully got to show jurors pictures of Wiggins’s tattoos, arguing their content undermined the defense’s case for mercy.

“Crush your enemies,” showed one tattoo across Wiggins’s back. “Show no mercy.”

In the end, it was the jury that showed Wiggins no mercy.

“It is therefore ordered that you shall be put to death by lethal injection,” Judge Wolfe said.