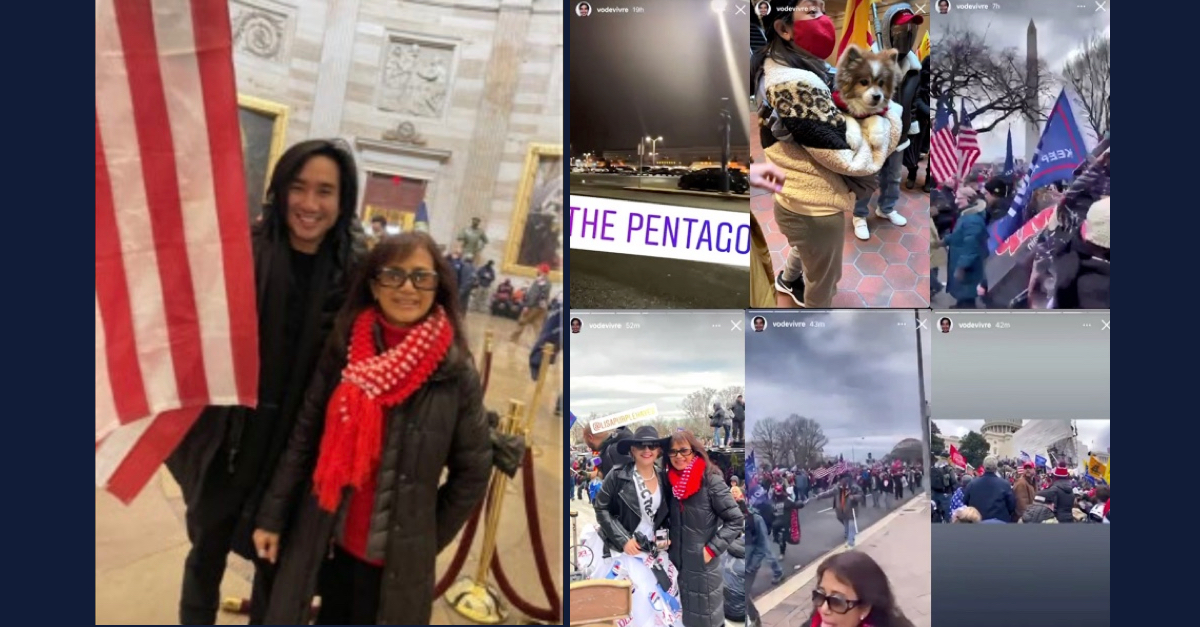 A plea agreement hearing for an Indiana man who proudly texted that he and his mom had stormed the Capitol building on Jan. 6 and “helped stop the vote count for a bit” veered off course after he refused to admit to a key element of the offense.

Antony Vo, 29, was supposed to plead guilty to one count of parading, demonstrating, or picketing in a Capitol building Friday, a misdemeanor that carries a potential six-month jail sentence.

He had enthusiastically posted pictures to social media that revealed details of his time in Washington, D.C., including a montage that showed him among the mob outside the Capitol and posing for a photo inside the Rotunda with a woman believed to be his mother.

“My mom and I helped stop the vote count for a bit,” he texted someone over social media.

As U.S. District Judge Tanya Chutkan went through the elements of the offense Friday, Vo balked at admitting that he knew he didn’t have permission to be in the Capitol building at the time.

“At the time you entered the Capitol building on Jan. 6 2021, did you know you did not have permission to enter the building?” Chutkan, a Barack Obama appointee, asked Vo.

“I think at first, well, the thing is, I was at the entrance for the longest time and I guess I wasn’t given much indication because three officers were standing there,” Vo said. “[The officers] gave me no indication I couldn’t enter, [they] never said I couldn’t enter. [They] gave my mom a thumbs up.”

Chutkan paused the hearing, saying she didn’t see how she could proceed after Vo’s response. The judge told Vo to speak privately with his attorney, federal public defender Maria Jacob.

“Mr. Vo has an absolute right to have all his concerns and all of his questions answered,” Chutkan said when they returned.

“This is not an assembly line,” she added.

Early on in the hearing, Vo showed signs that he might not have been totally prepared to enter a guilty plea.

During Chutkan’s colloquy with Vo to determine whether he understood the potential consequences of entering a guilty plea, Vo asked Chutkan for the definition of “parading.” At that point, Chutkan immediately announced a brief recess so that Vo and Jacob could speak privately.

Later, after everyone had come back on the record, Vo mistook the Statement of Facts, used in support of the arrest warrant affidavit, with the Statement of Offense, which outlines the actions to which Vo was pleading guilty.

In addition to parading and picketing in the Capitol, Vo was charged with disorderly conduct and entering and remaining in a restricted building or grounds.

The parties will return to court on April 27.