‘I’m Waiting for the Boogaloo’: Three Active-Duty Marines Charged With Breaching the Capitol on Jan. 6 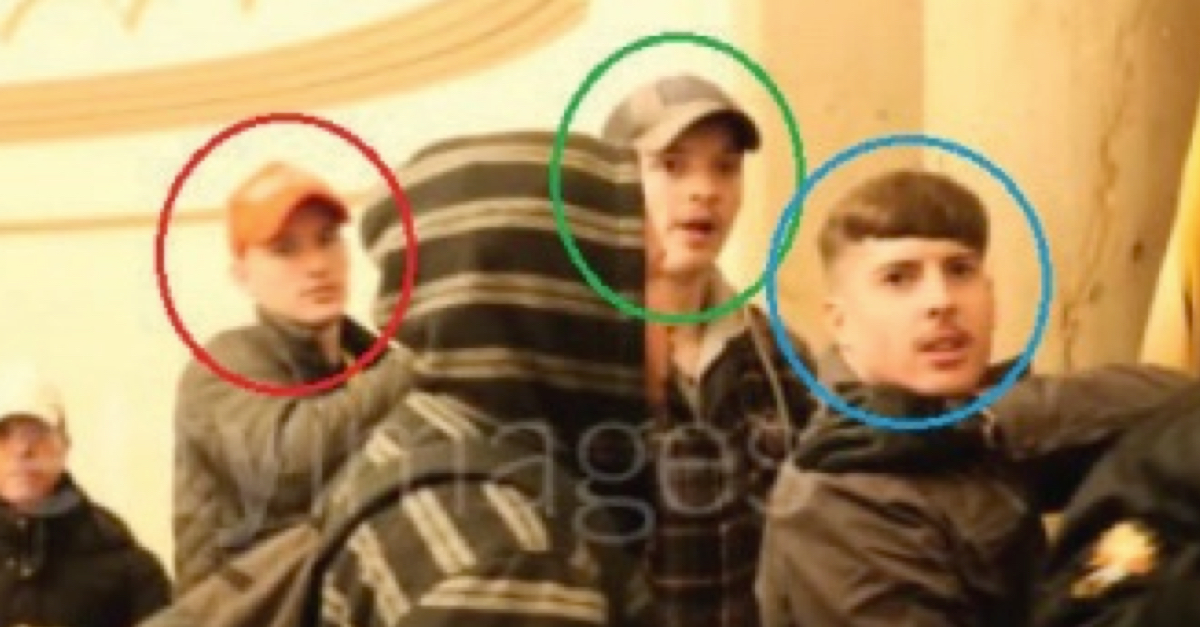 Joshua Abate, Micah Coomer, and Dodge Dale Hellonen are accused of entering the building through the Senate Wing Door at around 2:20 p.m. that day, just minutes after the initial breach by Donald Trump supporters angry over Joe Biden‘s 2020 electoral win. According to prosecutors, they went to the Rotunda and Statuary Hall, at one point placing a pro-Trump “Make America Great Again” hat on a statue and taking pictures with it.

They stayed inside for about 52 minutes before police formed a line in the Rotunda and directed people to leave, prosecutors allege.

Like so many other Jan. 6 defendants, Coomer may have contributed to his own undoing by posting about his Capitol exploits on social media.

“Glad to be apart [sic] of history,” Coomer reportedly posted on Instagram after Jan. 6, captioning a series of pictures that appeared to show the crowd outside and his viewpoint from inside the building.

Pursuant to a search warrant, Facebook also provided chats between Coomer and other Instagram users in which Coomer expressed his belief that the 2020 election was fraudulent (it wasn’t).

“One of my buddies here got a ballot for his cat that died three years ago,” Coomer wrote to an unidentified Instagram user on Nov. 7, 2020, according to the filing. “It’s literally a joke to them[.]”

While it’s unclear where Coomer’s friend lived, a deceased cat in Georgia did allegedly receive a voter registration application, although election officials say that it may have come from a third-party voter registration effort.

“[E]verything in this country is corrupt,” he wrote to another unidentified Instagram user. “We honestly need a fresh restart. I’m waiting for the boogaloo[.]”

“I agree but what’s a boogaloo?” the user asked.

The “boogaloo,” according to adherents to the right-wing anti-government philosophy, is a slang reference to a future civil war, according to hate group monitors.

Coomer was identified by a member of the Marine Corps stationed with him at Quantico, according to the filing.

Abate, too, was apparently open about having gone into the Capitol that day, acknowledging that he did so during a security clearance interview.

“[O]n or about June 1, 2022, ABATE was interviewed as part of his security clearance,” the statement of facts says. “During the interview, ABATE discussed entering the U.S. Capitol Building on January 6, 2021 with two ‘buddies’. ABATE stated they walked through the U.S. Capitol and in the Rotunda. While in the Rotunda, ABATE’s friend smoked a cigarette and they ‘walked around and tried not to get hit with tear gas’. ABATE also admitted he heard how the event was being portrayed negatively and decided that he should not tell anybody about going into the U.S. Capitol Building.”

The mob at the Capitol had its share of military reservists and veterans, including a former Army captain who taunted then-House Speaker Nancy Pelosi (D-Calif.) to “come out and play” and another Army vet who wore body armor emblazoned with a “boogaloo” patch to the Capitol.

A headquarters Marine Corps spokesperson confirmed to Law&Crime that the three men are on active duty with the military but would not comment specifically on the arrests and charges.

“We are aware of an investigation and the allegations,” the spokesperson said. “The Marine Corps is fully cooperating with the appropriate authorities in support of the investigation.”

According to the court docket, no hearing dates have been set.

Read the statement of facts, below.