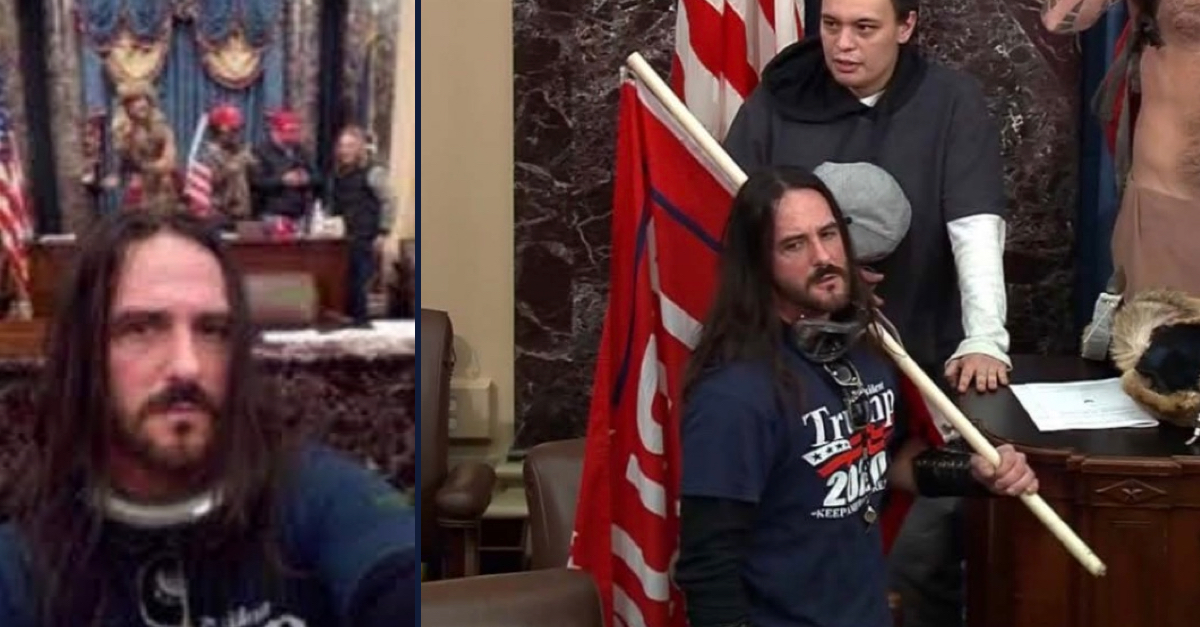 The first man sentenced for committing a felony during the Jan. 6 siege at the U.S. Capitol has told the judge overseeing his case that since finishing his eight-month prison sentence, he is getting his life back on track.

Paul Hodgkins, 39, appeared before U.S District Judge Randolph Moss on Friday for a re-entry progress hearing. He was sentenced in July of 2021 to eight months in prison after being the first Jan. 6 defendant to plead guilty to a felony.

Hodgkins was seen inside the Senate chamber during the Capitol siege, carrying a flag bearing Donald Trump‘s name, wearing goggles and a “Trump 2020” shirt, and saluting people who were standing on the dais. He had entered the Capitol at 2:50 p.m., a little more than 30 minutes after rioters first breached the building.

In June of 2021, Hodgkins pleaded guilty to one count of obstruction an official proceeding of Congress, a felony that carries a potential 20-year prison sentence and a fine of up to $250,000.

Although many Jan. 6 defendants have tried — and largely failed — to get the obstruction charge dismissed, several other famous faces of the Capitol siege have since pleaded guilty to the same charge, including Jacob Chansley, Josiah Colt, and Scott Fairlamb. At least 65 Jan. 6 defendants have pleaded guilty to felonies in the government’s expansive prosecution that has grown to encompass more than 850 defendants.

In addition to prison time, Hodgkins was also sentenced to two years of supervised release and ordered to pay $2,000 in restitution toward the estimated $2.7 million in damage to the Capitol. He reported for prison in September, and according to the federal Bureau of Prisons, he was released in April.

At the time of Hodgkins’ sentencing, Moss, a Barack Obama appointee, said the Capitol riot “left a stain that will remain on us and on this country for years to come.”

The judge was decidedly more genial and supportive in his exchange with Hodgkins on Friday.

“It’s good to see you, Mr. Hodgkins,” Moss said at the start of the hearing. “I’m glad to see you’re out and back to your life.”

Hodgkins filled Moss in on what he’s been doing in the months since he was released from prison.

“Things are going very well since I returned home,” Hodgkins said. He told Moss that he has started a new job, although he was earning less money than before, due in part to his sentence and in part, he said, to inflation.

“I’m happy to be back, I’m happy to be moving forward with my life,” Hodgkins said “I’m thankful [that] I can hopefully start putting this behind me.”

Hodgkins told Moss that his main job is working for a local Florida business that provides traffic management services. He also said that he has developed a new hobby: growing papaya trees.

“I have right now about 100 papaya trees I’m growing,” Hodgkins told the judge. Hodgkins said he may keep the trees for his own purposes, although he would consider moving into agriculture down the road.

Moss then pivoted away from the pleasantries and toward Jan. 6 itself, offering Hodges the opportunity to reflect on his experience on the record.

“I am curious as to whether you have thoughts to share, after having been through this whole process, served your time, paid your debt,” Moss said. “I’d be curious about it because we have a lot of other cases out there, and as you know you’re the first felony case where someone was sentenced. I would be curious as to your feelings, [but] there’s no obligation if you prefer not to share.”

“As you know, this was the first offense I’ve ever had in my life, with no prior record, so obviously going through that is not a pleasant experience,” Hodgkins said. “I would advise anybody out there who would share my words to avoid that at all costs, don’t ever go out the way of the law.”

“I hope I will never ever have to go through anything of the kind ever again,” Hodgkins continued, saying that he wanted to live like he had before Jan. 6, 2021. “I was proud to say I never had anything out the way of the law … I want to continue that going forward.”

Moss approved, and offered further encouragement to the defendant.

“I wish you nothing but good luck going forward,” Moss said. “It does seem like you’re doing everything right. I’m pleased to see that. This unpleasantness you’ve been through — you’ve paid your debt. I hope from here you can go on and have a happy life.”

A representative from the probation department had said that Hodgkins had paid down some of the $2,000 in restitution he was ordered to make toward the estimated $2.7 million in damage to the Capitol. Hodgkins has also complied with the conditions of his supervised release, although there was an incident in which Hodgkins was apparently associating with someone who was a convicted felon, which he is not allowed to do.

That would-be violation was handled with an “internal reprimand,” but prosecutor Mona Sedky pushed back somewhat on the idea that there was no cause for concern.

“I’m very pleased to hear how well Mr. Hodgkins is doing,” Sedky said. She noted, however, that she believed Hodgkins should have easily been able to figure out that the person with whom he had been communicating was a convicted felon, telling Moss that she was able to find that out through a simple Google search.

“I know Mr. Hodgkins’ position is that he didn’t know the person was a convicted felon,” Sedky said, requesting “an admonishment or reminder that he should go through his Rolodex or contact list and scrub it, and make sure he has a sense of the background of people he is with going forward.”

Moss then warned Hodgkins to “be careful about what you’re doing.”

“None of us want to be back here,” the judge added.

At the end of the hearing, Moss had more encouraging words for the defendant.

“Good luck to you, Mr. Hodgkins,” Moss said. “I hope your employment goes well, and good luck with your business with your trees. Be well and stay out of trouble.”