‘More Than a Simple Riot’: Florida Man Will Spend Eight Months Behind Bars in First Felony Sentencing for the U.S. Capitol Breach 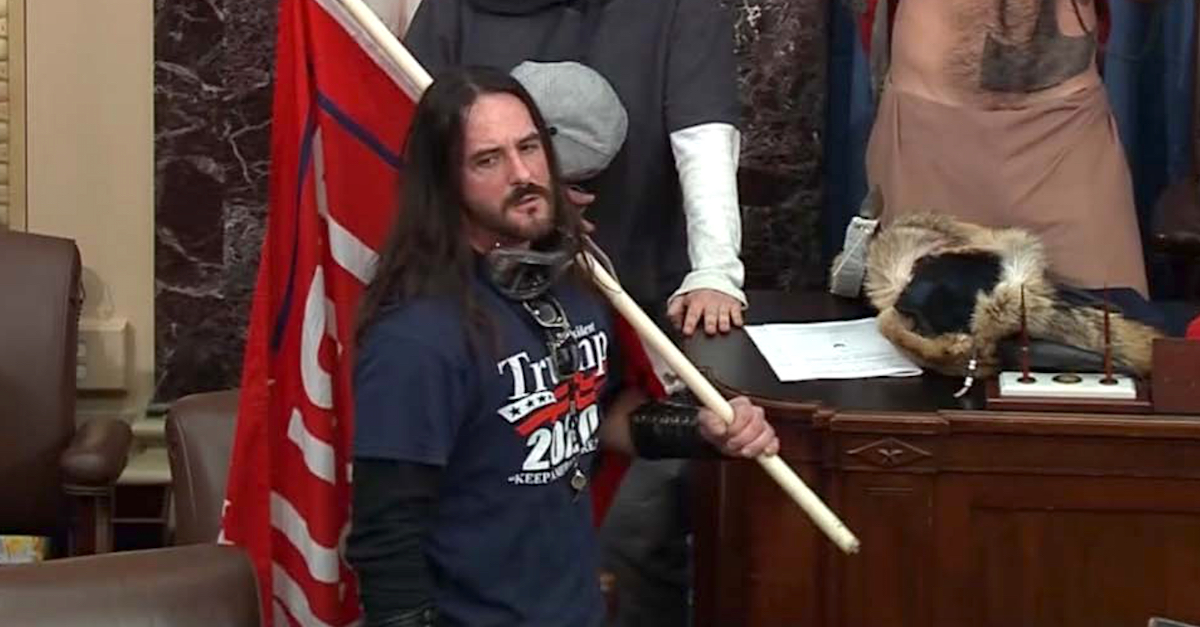 Capitol siege defendant Paul Hodgkins was captured on surveillance video inside the U.S. Senate Chamber on Jan. 6, 2021. To the right, Qanon Shaman Jacob Chansley is partially visible in the frame.

Captured on surveillance video waving a Donald Trump flag near the dais of the U.S. Senate Chamber on Jan. 6th, Florida man Paul Hodgkins received an 8-month prison term on Monday. Hodgkins, 38, is the first person on the U.S. Capitol breach docket to be sentenced for committing a felony, and prosecutors argued a stiff sentence was necessary to keep others from engaging in acts of “domestic terrorism.”

Though Hodgkins’ defense attorney rejected the domestic terrorism label as a threat to First Amendment freedoms, U.S. District Judge Randolph Moss cut off the defense argument that the siege of the Capitol was a protest that devolved into a riot.

“There were people storming through the halls of the Capitol chanting ‘Where’s Nancy?'” Judge Moss, a Barack Obama appointee, shot back.

He added later: “That is more than a simple riot.”

Moss added that there was nothing about the U.S. Capitol breach that constituted First Amendment-protected activity.

In early June, Hodgkins pleaded guilty to the most serious count against him: one count of obstructing an official proceeding, a charge that theoretically carried a maximum sentence of 20 years in prison, fine of $250,000 or twice the monetary gain or loss of the offense. Prosecutors agreed to seek a much lighter sentence, noting that Hodgkins does not rank among the more than 100 people their office charged with assaulting or resisting law enforcement on Jan. 6th.

Hodgkins emphasized that point in a prepared statement during his sentencing hearing.

“I can say without a shadow of a doubt that I am truly remorseful and regretful of my actions in Washington, D.C.,” he said, adding that he is not only saying that because of his punishment.

Declaring that Joe Biden is “rightfully and respectfully” the president of the United States, Hodgkins says that he went to the nation’s capital to support a president he “loved” and did not anticipate that it would lead to the siege of the Capitol.

“To put things in short, I allowed myself to put passion before my principles,” he says.

Judge Moss said that line may have been true, but that act carried heavy consequences for U.S. democracy. The judge also said he was “less convinced” that Hodgkins simply lost his bearings for a short period of time. He noted that Hodgkins traveled by bus from Tampa to Washington, D.C., carrying goggles and other gear with him.

In their sentencing memo, the government itemized what Hodgkins carried with him.

“Hodgkins entered the Capitol wearing a backpack containing protective eye goggles, rope, and white latex gloves, among other items,” Assistant U.S. Attorney Mona Sedky wrote in the memo. “He made his way to the heart of the proceeding that he has pleaded guilty to obstructing – the Senate chamber – where he took ‘selfie-style’ photographs and saluted others who were shouting and cheering from a nearby raised platform in the well of the chamber.”

Rattling off the gear Hodgkins brought into the Capitol, Sedky told the judge that she struggled to come up with a pithy catch-phrase that would encapsulate the siege of the Capitol, but she could not do better than the D.C. Circuit’s formulation.

“At its core, this was a grave danger to our democracy,” Sedky said, quoting from the D.C. Circuit’s ruling in the case of so-called “zip-tie guy” Eric Munchel.

Judge Moss echoed those themes in his closing remarks.

“It left a stain that will remain on us and on this country for years to come,” the judge said.

Throughout his comments, Moss reiterated that his need to balance the need to signal “severe consequences” for attacking the Capitol with the characteristics of Hodgkins’ more limited role.

In one sense, the government believes that Hodgkins belonged to a select group of U.S. Capitol breach defendants, as one of the roughly 50 people in a group of 800 who made it all the way to the Senate Chamber on Jan. 6th.

Seeking an 18-month sentence, the prosecutor argued that a substantial term of imprisonment would send a message that his conduct was serious.

“When Hodgkins entered the Capitol grounds, the Capitol itself, and the Senate chamber, it was abundantly clear to him that lawmakers, and the law enforcement officers who tried to protect them, were under siege,” the sentencing brief states. “Law enforcement officers were overwhelmed, outnumbered, and in some cases, in serious danger. The rule of law was not only disrespected, it was under attack that day. A lesser sentence would suggest to the public, in general, and other rioters, specifically, that attempts to obstruct official proceedings are not taken seriously.”

The prosecutor added that there was an additional need for a heavy sentence.

“The need to deter others is especially strong in cases involving domestic terrorism, which the breach of the Capitol certainly was,” the government’s memo states.

Hodgkins’ lawyer Paul Leduc depicted his client as an Eagle Scout with no criminal record who will pay a heavy price for 15 minutes of bad judgment. He called the photograph of his client on the Senate floor as one of a “lost soul” and the image of him at an Easter service as a man who had been “found.”

“We now live in a county [sic] that seeks to cancel one another,” Leduc wrote. “It is the end state and the result of becoming a post-Christian society. A nation of citizens that have yet to experience Godly grace, finds it next to impossible to give grace to each other.”

Filled with comparisons to the post-Civil War era and Reconstruction, the defense sentencing memo declares: “Today, the country is as divided as it was in the 1850s,” claiming that extending charity to Capitol breach defendants would “emulate” Abraham Lincoln.

Sedky decisively rejected attempts to downplay what Hodgkins did: “What Mr. Hodgkins’ conduct is not is a 15-minute walk with a crowd through the U.S. Capitol building.”

Echoing the themes of her sentencing brief, the prosecutor emphasized that Hodgkins had multiple “decision points” where he could have turned around but did not.

The first person sentenced for a misdemeanor offense on the U.S. Capitol breach docket, 49-year-old grandmother Anna Morgan-Lloyd, received a non-jail sentence and a stern warning by a federal judge not to violate probation.

Despite defense filings claiming to be regret her role in the attack on the Capitol, Morgan-Lloyd subsequently appeared on Fox News and downplayed her role in the attack. She claimed to have seen no violence, even though more than 100 U.S. Capitol Police and Metropolitan Police were injured in melees fulsomely documented in photographs, videos, and court papers.

[image via an FBI affidavit]