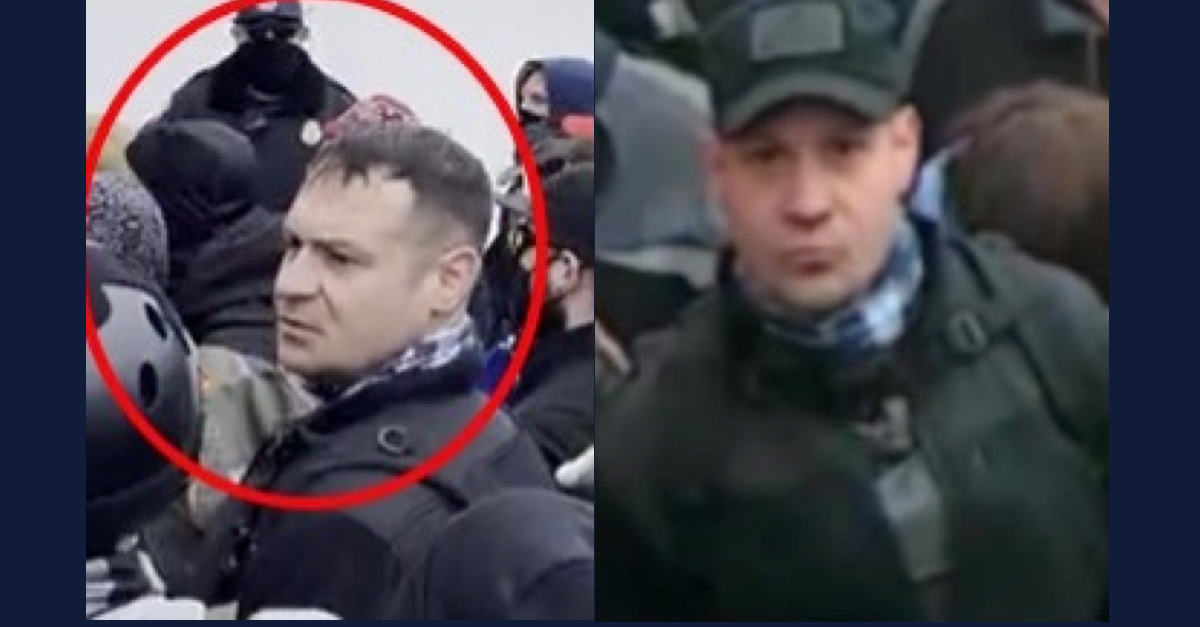 Barry Ramey seen outside the Capitol on Jan. 6 (via FBI court filing).

An alleged member of the Proud Boys accused of assaulting police officers with chemical spray during the melee outside the Capitol building on Jan. 6 was busted by the very federal agent he allegedly tried to intimidate through menacing text messages.

Barry Bennet Ramey, 38, of Plantation, Florida, is accused of deploying chemical spray from a can on at least two police officers trying to hold off the crowd of Donald Trump supporters trying to break into the Capitol building that day.

“According to a review of video footage posted on ProPublica’s Parler repository, Florida resident, Barry Bennett Ramey was observed assaulting law enforcement officers by spraying them with an unknown orange substance that is consistent with pepper spray,” the FBI affidavit in support of Ramey’s arrest says.

“Specifically, at approximately 0:27 of the video, Ramey is observed spraying a USCP Officer (Victim Officer 1) in the eyes. This assault resulted in Victim Officer 1 losing ground against the crowd and having to back away up the stairs,” the affidavit says. Ramey is seen spraying a second Capitol Police officer seconds later, according to the filing.

Investigators said that Ramey’s name appears on a “master list” of Proud Boys members. Several members of the so-called “Western chauvinist” extremist group have been identified in connection with the Capitol attack, including Enrique Tarrio, the group’s leader now charged with conspiracy, obstruction, and destruction of federal property.

Hundreds of Trump supporters angry about Joe Biden’s 2020 presidential win overran police at the Capitol and stormed the building on Jan. 6, forcing legislators to evacuate and temporarily stopping Congress from certifying the Electoral College vote.

Since then, prosecutors have arrested nearly 800 people in connection with the Capitol breach, and while many suspects have cooperated with federal investigators, Ramey does not appear to be one of them.

According to the affidavit, Ramey appears to have tried to intimidate the investigating agent through texts and a phone call.

As the filing describes:

On February 11, 2022, your affiant left his business card with a close associate of Ramey during an attempted interview. Your affiant’s business card contained your affiant’s work cell phone number and identified him as an FBI Special Agent. Subsequent to the attempted interview, on February 12, 2022, your affiant received a phone call from an individual who claimed to be Ramey’s attorney and who said that Ramey contacted him because Ramey had been informed that the FBI was asking about him.

The FBI’s investigation revealed that service provider for the incoming calls and texts “generally does not have retail subscriber/end user information on file.” From this, the affidavit says, “it can reasonably be inferred that Ramey had obtained your affiant’s contact information via the business card left with Ramey’s associate and that Ramey called and sent a text to your affiant[.]”

Ramey will make his initial court appearance in Florida on Friday.

Read the statement of facts attached to the complaint against Ramey below.