California Man Who Nabbed a ‘Do Not Enter’ Sign Gets Jail Time for Entering the U.S. Capitol on Jan. 6 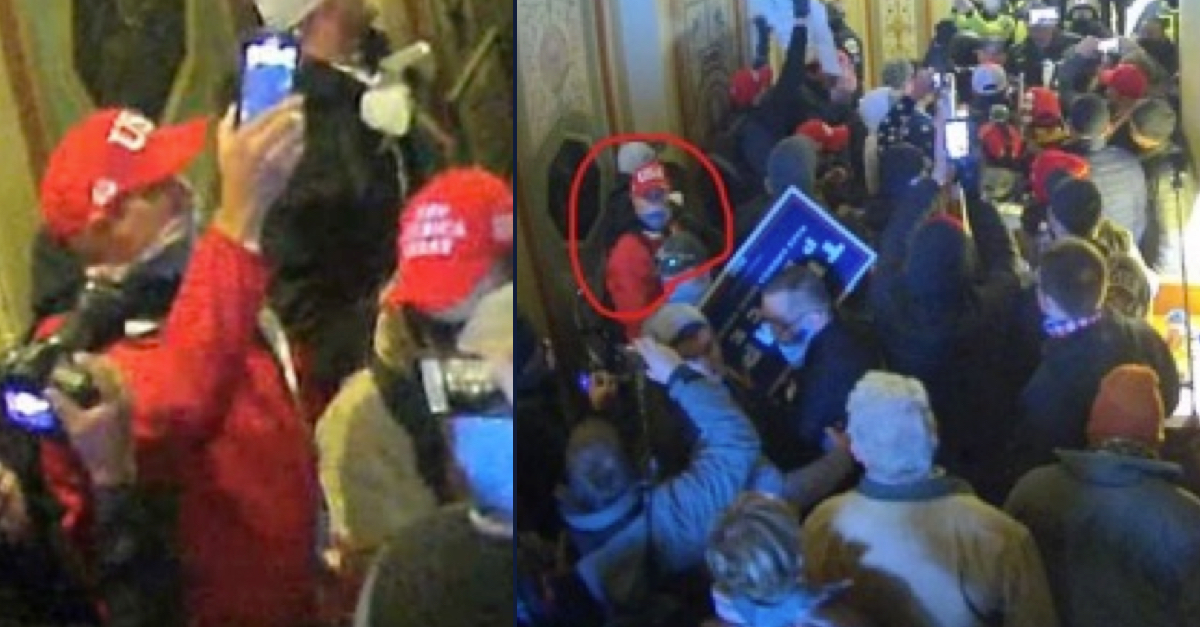 Philip Edward Kramer is seen inside the U.S. Capitol on Jan. 6 (images via FBI court filing).

A Southern California man who nabbed a “Do Not Enter” sign shortly before he stormed the U.S. Capitol building—and later destroyed it in what his lawyer described as a moment of “panic”—has been sentenced to 30 days behind bars.

Philip Edward Kramer, 62, travelled from Yorba Linda, about an hour south of Los Angeles, to Washington, D.C. ahead of then-President Donald Trump‘s so-called “Stop the Steal” rally. He ended up joining the crowd on its march toward the Capitol, and admitted to having entered the building and taking a video while inside.

He also acknowledged that he took a “Do Not Disturb” sign that he saw another rioter taking down on his way to the Capitol; he destroyed the sign after bringing it back with him to California.

Kramer admitted to preparing for Jan. 6 by bringing a walking stick and a helmet with him from California and by buying a carpet knife, a Master lock, rubber gloves, and medical supplies from stores in Virginia. He brought all those items with him to the Capitol except for the carpet knife.

“It’s Been Hell on a Whole Lot of Police Officers Who Were Assaulted That Day.”

At Thursday’s sentencing hearing, Senior U.S. District Judge Emmet Sullivan paused the hearing when it sounded like Kramer was contradicting what he had previously admitted, particularly as it related to items Kramer either brought with him from California or bought while he was in the D.C. area.

“I would like to say I regret my actions that day,” Kramer began. “I would like to tell the story of what actually happened. I’m not that person, I didn’t bring the helmet . . . I would never hurt or harm anyone.”

Kramer said that he had heard that “people were getting knocked out and rocks thrown at them” at prior pro-Trump rallies in D.C.

“I was by myself that day; I was all alone,” he continued. “I’ve never been to Washington, D.C. at all. It was just for my protection, to be honest with you.”

“I had a boring life,” said Kramer, a former truck driver whose license was revoked after the Jan. 6 charge against him. “I want to go back to that boring life. I’ve learned my lesson . . . this past year has been hell on me.”

“It’s been hell on a whole lot of police officers who were assaulted that day,” Sullivan, a Bill Clinton appointee, replied sharply, although he acknowledged that Kramer wasn’t accused of assaulting any law enforcement during the melee at the Capitol.

Kramer, after swearing he wouldn’t ever attack a police officer, then signaled that he wasn’t even in the Capitol voluntarily.

“I was 40 minutes behind the people going to the Capitol,” he said. “I got pushed in by the crowd.”

“I don’t believe you got pushed in,” Sullivan said.

“Honest, I would never lie to you, I’m being very honest. The whole crowd surged,” Kramer said.

It then appeared that Kramer contradicted himself when explaining why he brought the helmet, cane, and strap to the Capitol with him that day.

“The reason why you brought the helmet, the strap with the lock, the walking cane, [was] to protect yourself from individuals who were not supporters of President Trump, is that correct?” Sullivan asked.

“I was afraid for my own safety,” Kramer said.

“Did you tell law enforcement you brought those items to protect yourself from those who were not supporters of President Trump?” Sullivan pressed.

Sullivan warned Kramer to “be careful” and not say anything that wasn’t true.

“Did you not say that?” the judge asked again.

Sullivan paused the hearing at that point so that the lawyers could review the transcripts of Kramer’s interviews with law enforcement.

“They Pulled Them Off the High Tower Into the Deep Water.”

While the first part of the hearing ended on a tense note—the implication being that Kramer might have lied to either the court or to law enforcement—the resolution a few hours later was swift.

Kramer’s lawyer, Jonathan Ogata, parsed the language of the Statement of Offense, which said that Kramer brought the helmet, cane, and strap “to use in the event he needed to defend himself in the event he met with resistance from others present in Washington, D.C. who were not supporters of President Trump.”

Ogata pointed to different parts of the interview transcripts where Kramer referred to being afraid of being attacked, and that the cane had a dual purpose, as Kramer had told investigators that he had a bad knee and knew he’s be walking a lot on Jan. 6.

“What Mr. Kramer was trying to perhaps inartfully describe to the court was that the items he brought with him, those items were for protection, and not to use against people who were not Trump supporters,” Ogata said.

During the hearing, Sullivan marveled at the fact that Kramer, like many other Jan. 6 defendants, appeared to be model citizens before deciding to join the violent mob at the Capitol.

“[He’s] identical to these defendants who have lived crime-free lives,” Sullivan said. “They’ve been great Americans. Then all of a sudden they go off the deep end because someone off the deep end pushes them.”

“Your client’s not a horrible person,” Sullivan told Ogata. “I want him to hear that from me. By all accounts . . . he just went off the deep end on this, [because] other people off the deep end lured them—they pulled them off the high tower into the deep water.”

But Sullivan said that the offense Kramer committed was serious, and he had initially planned on issuing a harsher jail sentence than what the government had requested.

“You’re not a bad person, you just made a dumb decision here,” Sullivan said, later adding: “I do, however, believe the government’s recommendation of 30 days is eminently fair and reasonable considering your behavior before the event. I was inclined before the hearing to sentence you to more than 30 days, even though the government hadn’t considered it.”

In the end, Sullivan sentenced Kramer to a month behind bars, although he sounded somewhat regretful about it.

“You’re not a horrible person,” Sullivan said. “If you were, you’d have a much more serious sentence. You look very good today, very professional, and I’m sorry to have to impose this sentence, but it’s necessary[.]”

Sullivan also imposed a $2,500 fine, on top of the $500 Kramer agreed to pay in restitution toward the estimated $2.7 million in damage to the Capitol.

Sullivan said that Kramer could self-surrender to jail after Labor Day.