‘Be a Patriot, Get My Flag’: Police Bodycam Footage of Convicted Rioter Inside Nancy Pelosi’s Office Released 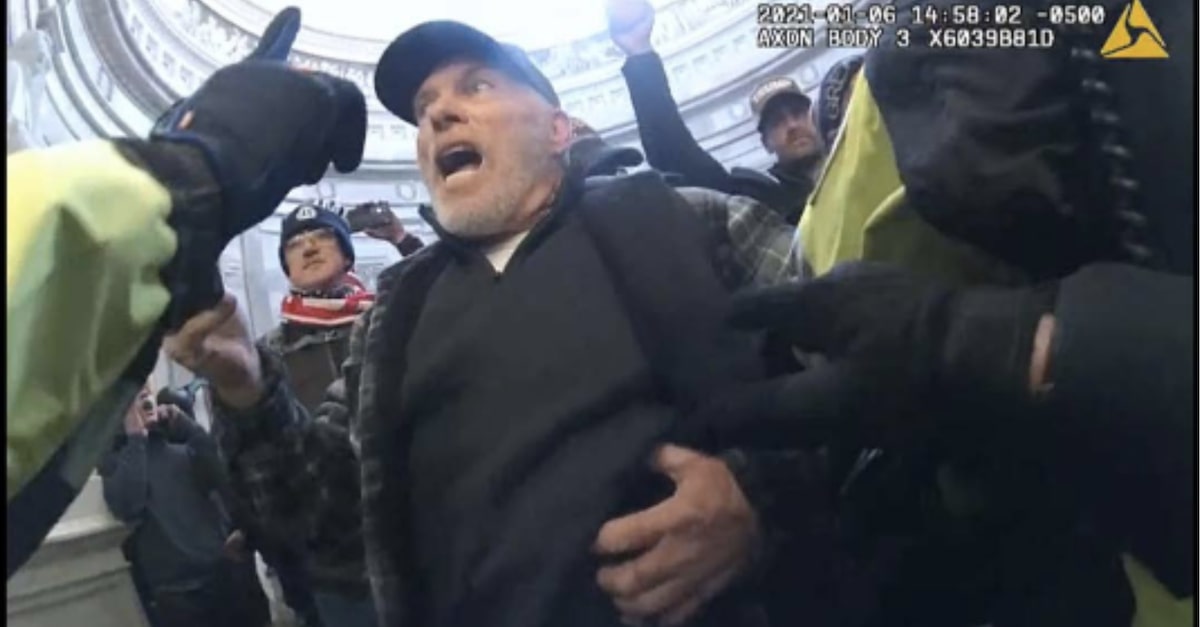 “Hey hon, can you do me a favor, though? Try to be a patriot,” Barnett could be heard telling a female officer, as he exits a room marked “Office of the Speaker.”

“I’m being one,” the unseen officer replies.

As Barnett walks away, he appears to threaten the officer by stating: “Don’t be on the wrong side. You’re going to get hurt.”

“Get out!” the officer shouts.

(See the exchange at around 2:20 minutes)

Videos show that “be a patriot” was a constant refrain from Barnett.

“Be a patriot, get my flag,” Barnett bellowed. “I’ll die for my flag.”

Needling the officers, Barnett claimed that the flag had special significance for him.

The flag, Barnett said, was on a “steel pipe — for antifa,” in an apparent reference to attacking antifascist activists.

Inside that office, Barnett was seen with his foot up on a desk — and a stun gun in his pants. He left a note for the Speaker of the House stating “Bigo was here you biatch.” Photos released into evidence show two other messages, in seemingly different handwriting, next to that missive. Both were written in block capital letters; one warned “WE WILL NOT BACK DOWN” and the other said “YOU WILL NEVER STEAL THIS COUNTRY.” 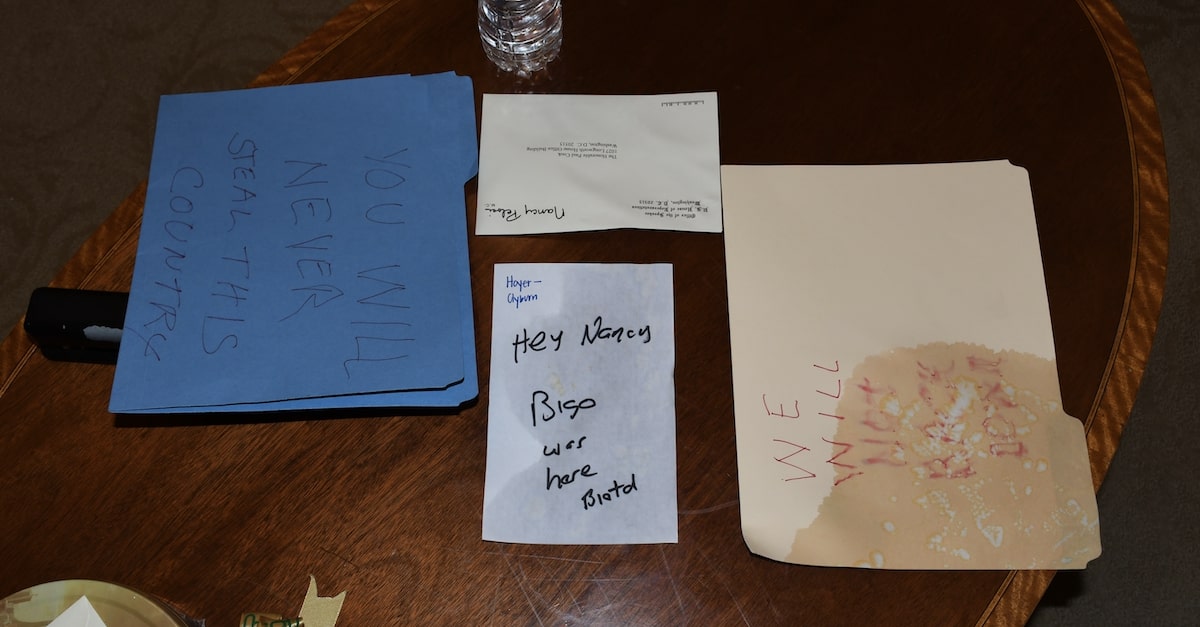 Jan. 6th rioters left these notes on a desk inside Nancy Pelosi’s office. (Photo via DOJ)

Also visible in the frame is an envelope.

After leaving the Capitol building, Barnett boasted about his exploits to the press and showed a reporter an envelope taken from Pelosi’s office.

“I did not steal it,” Barnett reportedly told the outlet. “I bled on it because they were macing me and I couldn’t f—— see so I figured I am in her office. I got blood on her office. I put a quarter on her desk even though she ain’t f—— worth it. And I left her a note on her desk that says ‘Nancy, Bigo was here, you b—-.’”

The swiping of the envelope led to a count of theft of government property. Barnett was convicted of that and other charges of civil disorder, obstructing an official proceeding, entering and remaining in a restricted building or grounds with a deadly weapon, and multiple misdemeanors associated with his entering the Capitol.

The deadly weapon in question was a Zap Hike ‘N Strike Walking Staff with spike electrodes, whose package authorities discovered at the time of Barnett’s arrest. 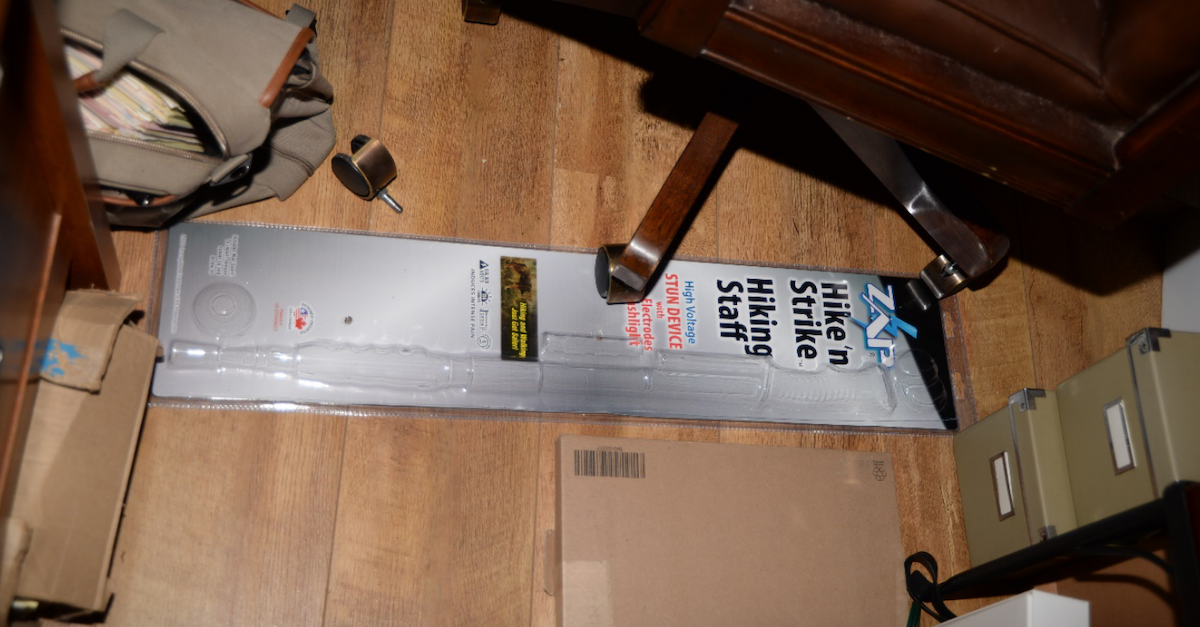 Authorities say they found the packaging for Barnett’s stun gun while searching his Arkansas home. (Photo via DOJ)

The smiling, even gleeful, photograph of Barnett with a foot on Pelosi’s desk made him one of the most visible figures of the attack on the U.S. Capitol, and a jailhouse phone call entered into evidence that both Barnett — and his supporters — were willing to capitalize on his image.

In a jailhouse phone call, Barnett could be heard complaining that others took it upon themselves to merchandise off him.

“So people will start selling T-shirts that make money off me,” Barnett groused. “It ain’t gonna happen.”

The 62-year-old may have fewer opportunities to market himself come sentencing time, on May 3, 2023. Barnett faces a maximum penalty of 47 years in prison.