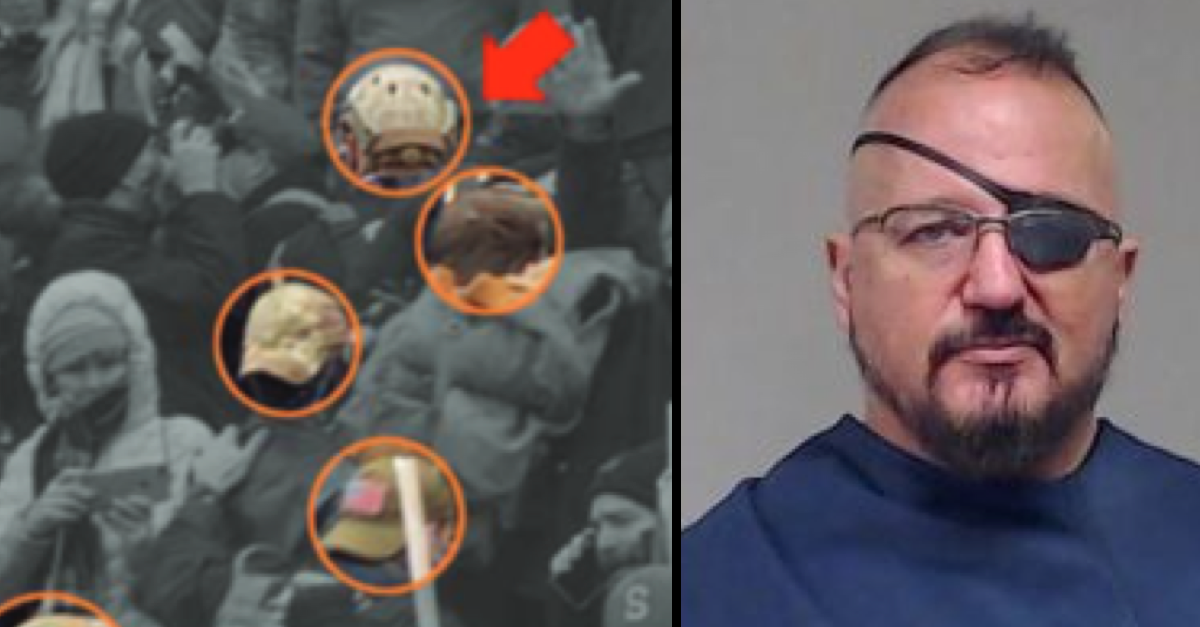 An alleged group of “Oath Keepers” charged with storming the U.S. Capitol Complex on Jan. 6, 2021, want an upcoming trial moved away from Washington, D.C. due to “prejudgment bias” among a local jury venire, according to their attorneys.

Defendants Thomas Caldwell, Kelly Meggs, Kenneth Harrelson and Jessica Watkins, and Stewart Rhodes filed a joint motion for a change of venue on Friday in U.S. District Court for the District of Columbia. It reargues several points raised in an earlier change of venue request but suggests that the time is ripe for the request to be granted because a jury trial is one week away and because questionnaires sent to an “initial panel of 151 people show[] over 51% admitting to prejudgment bias, under oath” (emphases in original).

The argument goes as follows:

Respectfully, Defendants are at the voir dire stage, and now have sworn written responses to questionnaires admitting to a majority holding prejudgment bias. These Defendants are merely seeking to avoid an Appeal issue, prevent the argument of local prejudice, and transfer under Rule 21(a) to sister District in which the government has venue, and is only 8 miles away, or to another District where there is no prejudice to the government in doing so, but instead, an inconvenience.

The motion also argues that the cases against the defendants have “recently been further targeted in the news” and by the United States House Select Committee on the January 6 Attack. The document includes a list of press reports and a Committee tweet that discuss several issues about which the defense is concerned (the typographical errors are in the original):

While the court barred the admission of what the government alleged constituted “a death list” by Caldwell on a motion in limine, the media promptly published it alleging it was the Oath Keepers Death List. The court barred what the government alleged was “bomb making instructions” found in Ms. Watkins attic, and the media promptly released the alleged instructions again alleging that the Oath Keepers had “attempts to acquire homemade firearms.” And most recently, as stated, the Zello Recording tweeted out by the Select Committee, has been picked up by the mainstream news and reported everywhere as the Oath Keepers. After oral argument at Day 1 of the Pretrial hearing before this court on September 14th, over Defendants Joint Motion in Limine on a Zello Recording, on September, 15th, the Select Committee on the Investigation of January 6th (“the Select Committee) tweeted out the subject Recording saying “The Select Committee has obtained a recording of communications over a walkie-talkie app among Oath Keepers who were inside the Capitol and others who were sharing intelligence from elsewhere.it was the Oath Keepers on the recording.” This was promptly picked up by numerous other publications.

“[T]hat Congress would publicize a recording that the Court signaled would be inadmissible in part, is shocking,” the motion asserts. It further argues that “incessant negative publicity” from press reports and from the Jan. 6 Committee necessitate a change of venue.

Included in the defendants’ complaints about “incessant” publicity is a quote from a Joe Biden speech.

“They look at the mob that stormed the United States Capitol on January 6th — brutally attacking law enforcement — not as insurrectionists who placed a dagger to the throat of our democracy, but they look at them as patriots,” Biden said on Sept. 1, 2022.

The defendants said the “they” to whom Biden referenced were “MAGA Republicans.”

The defendants further cited a survey which purports to show that 68% of Washington, D.C. residents have a “decidedly Unfavorable” view of the Oath Keepers “while the other Test Areas range from 36% – 46%.”  According to the defendants, the survey shows that D.C. is “an outlier in comparison to three other unrelated jurisdictions,” including the “liberal” Eastern District of Virginia and the “conservative” Northern District of Florida.

“DC is once again show [sic] to be an outlier because it was the community impact [sic] by the J6 protest,” the document states using rather choppy language.

The same survey, however, admittedly shows that 49% of prospective D.C. jurors indicated that they could be fair were they chosen to hear the case.

“The defense does not dispute that almost half of these prospective jurors will try to be fair,” the document asserts in a caveat.

However, the caveat has a caveat:  “DC is an outlier in its claims that it can be fair despite admitting to prejudgment bias,” the motion claims.

In other words, according to the defense, jurisdictions that hold lesser amounts of bias against the Oath Keepers claimed they would be less fair; the D.C. district — which holds the most bias against the group — simultaneously claimed it could be more fair.  Or, put another way, the defense asserts that “a latent bias exists among those who deny their biases.”

Some courts are willing to seat jurors who admit to holding preconceived biases if those jurors pledge to set their assumptions aside and promise to be fair.  The process of securing such a promise is known as the “rehabilitation” of a juror.

The joint motion for a change of venue elsewhere quips that current Attorney General Merrick Garland agreed to a change of venue request for Timothy McVeigh in the Oklahoma City bombing.  Garland played a key role in coordinating the prosecution of McVeigh and co-defendant Terry Nichols.

The motion also contains a proposed order from the court.  The proposed order asks a judge to agree to a change of venue “to another District to be decided.”  No specific district is named.

The motion was signed by attorneys David W. Fischer of Glen Burnie, Maryland, and Juli Zsuzsa Haller of Washington, D.C.  As Law&Crime has previously reported, Haller is a one-time “Kraken” lawyer who was part of efforts to overturn Biden’s victory over Donald Trump in the 2020 presidential election.

Rhodes, Meggs, Harrelson, Watkins, and Caldwell were among a series of defendants charged with seditious conspiracy, among other things, via a 44-page superseding indictment dated June 22, 2022.

The Southern Poverty Law Center says the Oath Keepers claim to have “tens of thousands of present and former law enforcement officials and military veterans as members.”  The group, according to the SPLC, is a “far-right antigovernment group.”

The joint motion, the attached survey, and the proposed order are embedded below: