After Joining Jan. 6 Mob with Pizzeria Owner Who Insists She Is ‘Not a Person,’ Vietnam Vet Gets $500 Fine and No Probation 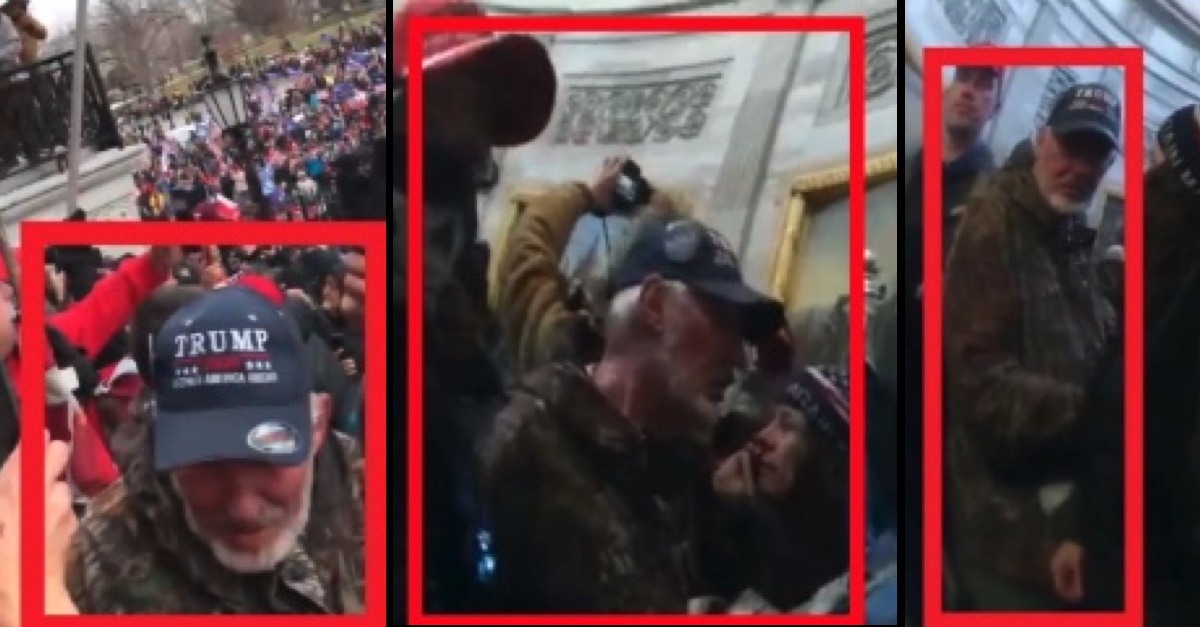 A Vietnam veteran and Purple Heart recipient who admitted to being a part of the mob that attacked the Capitol on Jan. 6 has received a sentence of a $500 fine without any probation or court oversight going forward.

William Blauser, 75, had traveled from Pennsylvania to the Capitol with his friend Pauline Bauer, a pizzeria owner who has since made a name for herself by getting into a Biblical back-and-forth with the judge overseeing her case and asserting what sounds like a so-called “sovereign citizen” defense. For instance, Bauer made headlines for insisting she is “not a person.”

Woman identified as Pauline Bauer inside the Capitol Rotunda

Blauser and Bauer were among the scores of Donald Trump supporters that overran police at the Capitol and swarmed the building on Jan. 6 in order to stop Congress from certifying Joe Biden’s win in the 2020 presidential election.

Blauser, seen in a Trump hat, was never accused of engaging in violence or destruction of property. Bauer, on the other hand, was seen on police body cam footage demanding that they “[b]ring Nancy Pelosi out here now” and that the House Speaker and her colleagues “need to hang.”

At Thursday’s sentencing hearing, U.S. District Judge Trevor McFadden, a Trump appointee, expressed concern that Blauser is seen having some kind of physical contact with police inside the Capitol building that day. However, the government said that prosecutors had accepted Blauser’s assertion that he was trying to extricate Bauer from a confrontation with police.

“Ms. Bauer is one of Mr. Blauser’s best friends,” Blauser’s attorney Rammy Barbari said at the hearing. “It has always been his contention that he was trying to restrain Ms. Bauer’s contact with law enforcement.”

“I can see how you were probably coerced in one way or the other by Ms. Bauer,” McFadden said.

McFadden pressed Blauser for an explanation as to how he came to stand before him, awaiting sentencing for pleading guilty to a federal crime.

“Sir, how did this happen?” McFadden asked. “[L]ook at your record, you are the last person someone would ever expect to be in trouble with the law. What went wrong?”

Blauser responded that he had wanted to see the memorial to those who fought in Vietnam, where Blauser served multiple tours of duty and received a Purple Heart and other commendations.

“I wanted to see the Vietnam Veterans Memorial,” Blauser said. “I have some friends who are on that. I thought it would be a good time to go over there and view that, which I never did get a chance to do it.”

Blauser also said he was hoping to see Pennsylvania state senator Doug Mastriano, a GOP lawmaker whose alleged participation in the Jan. 6 riots appears to have raised his profile in the state.

“I wanted to see our senator speak because he’s a man speaking for our freedoms, and that is what I fought very very hard for when I was over in Vietnam[,] for our freedom, so that was my intention,” Blauser said.

McFadden said he wasn’t questioning why Blauser would come to the Capitol on Jan. 6, but that he ended up entering the building is somewhat confounding.

“I think a lot of Americans are wondering how a political rally turned into such a catastrophe,” McFadden said. “I’m not aware of any [Jan. 6] defendants that have your long impeccable background, but if this happens with you, it makes it hard to understand … how could this happen?”

Blauser said that he couldn’t undo his actions, but that he was “very sorry and remorseful.”

McFadden told Blauser that when he pushed his way through the crowd that day, he was “trespassing in one of our country’s most sacred places,” and later added: “You ended up being part of the mob that was involved in something much more dangerous and much more destructive than anything you would have intended.”

In the end, McFadden issued a sentence well under what the government had requested, and ordered Blauser to pay a fine of $500 for his role in the Capitol siege. He will also pay $500 in restitution for damage to the Capitol.

“But for your long and unblemished record this would be a very different sentence,” McFadden told Blauser at the end of the hearing. “We all make mistakes and January 6 was yours. I’m confident you will not repeat it.”

According to a Law&Crime review of sentences in Jan. 6 prosecutions, Blauser appears to be the first defendant to be sentenced only to a fine and restitution.